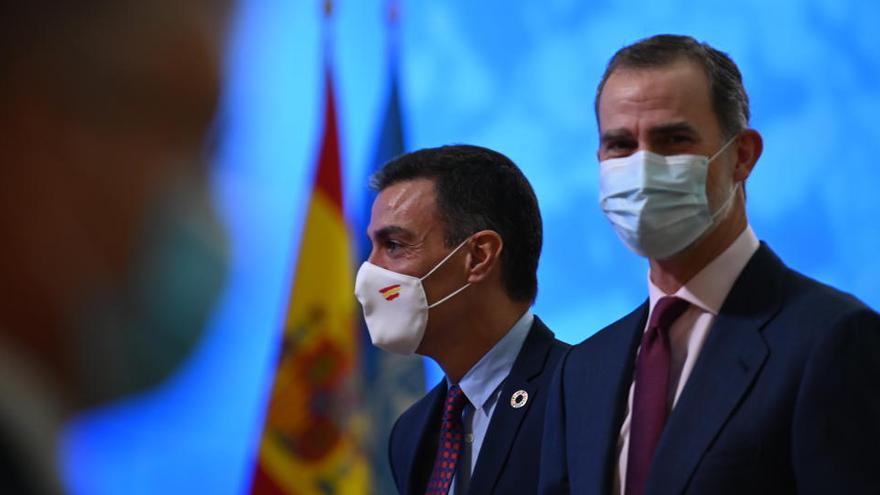 He PSOE and the PP and also Vox and Cs have shown their support this Friday to the Christmas speech of King Felipe VI, whose indirect allusion to the emeritus king has not convinced, however, the United We Can, a coalition partner in the Executive, or the parties that support it.

The expectation surrounding the Christmas Eve message has given way to two opposing visions: who praise his defense of the obligation of ethics over the family -PSOE, PP and Cs- and those that they demand explanations before the presumed businesses hidden abroad behind the back of the treasury of Don Juan Carlos.

Felipe VI alluded to the king emeritus on Thursday without naming him, when he defended that “the moral and ethical principles” that citizens demand “bind everyone without exceptions” and are “above any consideration, of whatever nature, even personal or family considerations.”

The monarch focused the bulk of his speech on instilling hope in the public to face the recovery after the pandemic with “effort, union and solidarity, with everyone and for everyone“and he made no allusions to Catalonia.

Praise from the PSOE and the right

The PSOE has applauded the King’s “firm commitment” to ethical values that citizens demand. Its president, Cristina Narbona, has also trusted that Felipe VI will continue with the renewal of the democratic institution that began from the beginning of his mandate.

According to Narbonne, faced with this extremely serious and exceptional situation, the king wanted to instill a message of confidence in the future and “in ourselves from a deep sense of individual responsibility and trust in our institutions and in our ability to overcome what we are in. living”.

And for this, it is necessary work from unity and from democratic values, with respect to plurality and differences and with a desire for dialogue among others, the socialist leader has assured.

The king’s message is for the opposition leader, Pablo Casado, the speech of “hope, future and illusion” that Spain needs to recover after the pandemic. The president of the PP has starred for the first time in the reaction of his party to the monarch’s Christmas Eve message, with the intention of showing his support for what the PP considers “a succession of attacks by members of the government itself” on the king.

Casado has vindicated the work of the monarch and the “exemplary” that he put as a guide to his reign by being proclaimed and has defended the Crown as the “symbol” of the “continuity and permanence” of Spain.

The renewing spirit of the reign of Felipe VI is based on ethical and moral principles “that oblige everyone without exceptions.”
And in the defense of unity and the Constitution “that everyone must respect” as a basis for coexistence, democracy and freedom.
“A King with everyone and for everyone.” pic.twitter.com/qBYQhcYD2C

Citizens have joined the praise, which considers Felipe VI’s speech “like a statesman“, in which” he clearly separated himself “from the cases that affect his father, Juan Carlos I, as stated by the leader of Cs in Catalonia, Carlos Carrizosa.

Vox has not valued the speech this Friday, although its leader, Santiago Abascal, did last night, who on Twitter echoed the statement that Spain “is not a people that surrenders or resigns in bad times”, made by the king.

Felipe VI: “We are not a people that surrenders or resigns in bad times. It will not be easy to overcome this situation and in each house you know it well. But I am sure that we will move forward. With effort, union, and solidarity Spain will move forward ” #VivaElRey pic.twitter.com/z3hONwnjg2

Criticisms of Podemos and its partners

The lack of explanations of the monarch have provoked the criticism of United We Can. His spokesman in Congress, Pablo Echenique, has missed that the king say why he “hid” his father’s “shady deals” and an explicit condemnation of “the corrupt activities of Juan Carlos I and his tax evasion.”

“There is a question that remains unanswered: Is the monarchical institution a her

And he has called to check at the polls if the Spanish prefer a monarchy or a republic before a head of state that in his opinion does not have “democratic” or “judicial” control.

The PNV has joined the criticism. His spokesman in Congress, Aitor Esteban, has regretted that the king “did not get wet” and “he has not even tiptoed” through the controversial issues that this year “affected him directly,” not only about Don Juan Carlos, but also because of the letters addressed to him by ex-military men. Therefore, Esteban sees it as “normal” to question “the institution” he represents.

Also the spokesperson in the Congress of EH Bildu, Mertxe Aizpurua, has spoiled the absence of references to the “corruption that plagues the royal house”, territorial questions or the statements of members of the armed forces. For the nationalist party “it was more clarifying because of what he didn’t say than because of what he said.”

The independence movement denies its legitimacy

The Catalan independence movement has gathered like every Christmas in Montjuic, in the traditional floral offering to the former president of the Republican Generalitat Francesc Macià, where ERC has claimed a “Catalonia every day more republican“in front of a monarch who considers that he” remains committed to repression. ”

This has been pointed out by the number two of ERC in the Catalan elections, Laura Vilagrà, who has called to join ERC to “build a republic clean of corruption.” “The speech confirms that we Catalans do not have a king, this king cannot represent us“, said the candidate of JxCat to the Generalitat, Laura Borràs, after a message in his opinion” void of political content “and without” any purpose of amendment. “He also accuses Felipe VI of being an” accomplice of the situation “of the emeritus king.

For PDeCAT, the king’s speech “bordered on cynicism” when speaking of values ​​and justice “ and “silence many of the things that are happening” and that affect the monarchy, as stated by the PDeCAT candidate on F 14, Àngels Chacón.

Criticisms have also reached the monarch by the Canary Coalition, but not on account of the institution, but due to the absence of the “migratory drama” in his speech. “The migratory drama experienced by the islands cannot be ignored and it has been in the king’s speech “;” a mention of support for the islands was necessary, which was not given, “said the secretary general of CC, Fernando Clavijo, who does applaud the allusions to the spirit of the Transition and the Constitution.