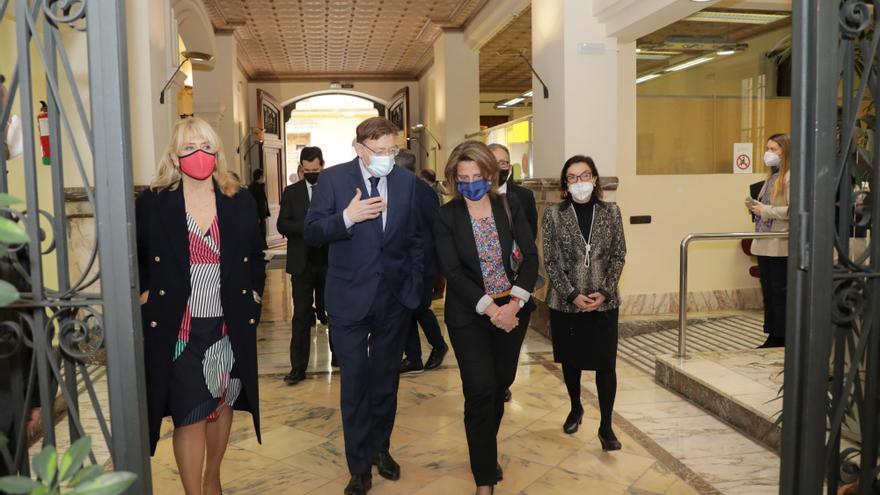 Fighting against depopulation is one of the objectives of the Generalitat. To do this, a strategic plan against depopulation has been drawn up ‘Strategy Avant 20/30’, a document that was presented today by President Ximo Puig that stressed that a “alliance of institutional alliances “to overcome” the frontier of inequality“from the rural area.

During the event, which was attended by the fourth vice president and minister for the Ecological Transition and the Demographic Challenge, Teresa Ribera, the AVANT 20/30 Strategy that the Generalitat has promoted, together with the public universities and a large participation of all the agents involved, which identifies the priority solutions to combat depopulation and proposes more than 250 actions of economic, social, cultural, environmental, innovation dimension, and political governance to develop in the present decade.

During his speech, the president described the Avant 20/30 Strategy as a plan “dynamic and participatory”, qeu “adds the will and instruments to move forward”, and in this sense has ensured that for this it must “establish synergies to carry out joint action between all administrations”. The head of the Consell has stated that not only is at stake that “some regions have more life”, but “the very cohesion of Spain and the Valencian Community”, so an “alliance of alliances between all the institutions” is essential. . During the event, Puig has assured that the pandemic has meant great uncertainty but at the same time a “great opportunity” to end the “border of inequality” in rural areas.

Likewise, the president has also referred to “the great hope” posed by European funds, of which “will be available to the extent that we are able to generate projects”, but has insisted that the most important thing that rural space needs are human resources and “the conviction of having a future.” To this end, he highlighted the need to “make rural areas attractive” especially for young people, who will be decisive in the ability to recover, and to launch the “plan for reflection, debate and action” that represents the Avant 20 Strategy. / 30.

The event was also attended by the Second Vice President and Minister of Housing and Bioclimatic Architecture, Rubén Martínez Dalmau; the Minister for Agriculture, Rural Development, Climate Emergency and Ecological Transition, Mireia Mollà, and the Minister for Territorial Policy, Public Works and Mobility, Arcadi Spain, as well as the President of the Castellón Provincial Council.

During his speech, the president referred to the progress made since the creation of the Valencian Antidepopulation Agency, thanks to programs to maintain essential economic activities, the commitment to open new schools, as well as credit support to companies that generate employment and fix the population, or tax deductions for families in municipalities at risk of depopulation.

He also stressed that European funds are a great opportunity to “correct the imbalances of depopulation”, and in this sense he pointed out that the Generalitat, within the framework of the Valencian Recovery Strategy, has already presented to the Ministry for the Ecological Transition and the Demographic Challenge 32 projects against depopulation who aspire to receive European funds.

It should be noted that these projects, whose estimated budget is 685 million euros, contemplate actions such as the Promotion of Vocational Training in rural areas with training offers in unpopulated areas; a program for the hiring of unemployed people in municipal emergency services, or the deployment of infrastructure advanced 5G telecommunications to promote digitization and economic development.

The diagnosis carried out has confirmed that in the Valencian Community There are 224 municipalities with less than 1,000 inhabitants, 40% of the total, cor corresponding in most cases to inland regions, and in them the dependent population exceeds 60%. In addition, the density of some of these regions is between 4 and 6 inhabitants per square kilometer in areas such as Els Ports de Morella (4 inhabitants / km2), Rincón de Ademuz (4.5), Alto Mijares (5.2) or Valle de Ayora-Cofrentes (6.5); Y 55% aging rate (297) of the Valencian municipalities is higher than 20%, especially in those located in the interior of the provinces of Castellón and Valencia, and in the mountains of Alicante.

The Strategic Anti-Depopulation Plan Estartegia AVANT 20/30 comprises 5 strategic lines, 15 strategic areas, 53 programs and more than 250 economic actions, environmental, social, cultural and political governance. Specifically, the first strategic line related to the economic dimension contemplates a policy aimed at facilitating differentiated taxation, in order to facilitate business entrepreneurship, through new companies, or the establishment of existing companies in the territory; as well as the promotion of companies under the umbrella of the social economy, through associative formulas such as work cooperatives.

In the same way, the development of measures to boost employment is contemplated, through various programs, including aid programs for rural development; programs for the conservation and recovery of cultural heritage and natural resources; and the improvement of territorial connectivity, as well as internal accessibility.

With regard to the environmental strategic line, the study of a future Law of Territorial Balance, consequence of the Territorial Strategy of the Valencian Community, to establish mechanisms that compensate the territorial imbalances, and the weaknesses of the municipalities in the process of depopulation; as well as actions related to forest conservation, the use of renewable energies, water quality, etc.

Regarding the social strategic line, it highlights the actions to guarantee access to quality social services, which facilitate the settlement of the population in municipalities in the process of depopulation: training, educational, banking, health, etc; as well as the incorporation of new technologies, especially ICT, which constitute a factor of territorial development, given the opportunities and advantages it generates, especially in business activities, social services, cultural and educational services.

Regarding the cultural strategic line, the value of the cultural dimension as a factor against depopulation is considered, and, finally, the strategic line of political governance includes, among others, a work plan that allows coordination between the various autonomous administrations , and the incorporation of other administrations (provincial and supra-municipal), to increase the effectiveness and efficiency of government actions; as well as a system for monitoring the results of the actions of the Autonomous Administration in the Plan AVANT program.