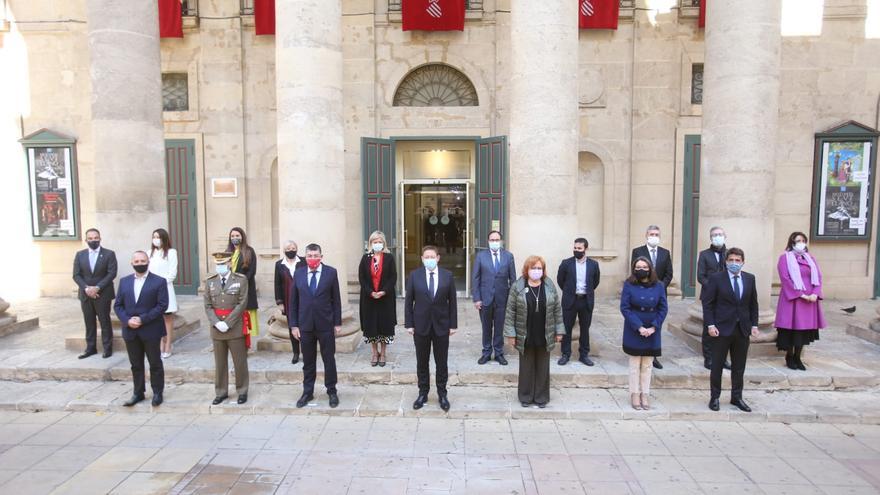 The Principal Theater of Alicante has hosted this morning the act of Constitution Day, chaired by Ximo Puig, president of the Valencian Community, who highlighted in his speech the need to avoid “centralist” or “peripheral” independence movements and has put in I value the importance of concepts such as “shared institutional loyalty” or “co-governance” at the present time. The president highlighted that for the recovery of the current situation “it has been crucial” to have “the voice and the gaze” of Alicante. Mónica Oltra, vice president and minister of Inclusive Policies, through three articles of the Magna Carta, has In his speech he underlined the obligation of the public powers to protect health, social benefits and the promotion of equitable distribution of income. In this commemorative act of Constitution Day, the Distinctions of the Generalitat for the Defense of Constitutional Rights and Freedoms 2020, which have fallen to professors Ernest Lluch and Manuel Broseta, both posthumously, and the international NGO Save the Children.

All the members of the Consell attended this commemorative act, which began at 12:30 p.m. in the Principal Theater, both the president and the vice president and minister for Inclusive Policies, Mónica Oltra, and verses were recited from Valencian and from Alicante, respectively, Francisco Brines and Francisca Aguirre.

The president of the Generalitat has demanded for Spain “an emotional reconnection of the whole with its parts”, as well as “seal, at once, its internal tears.” To do this, it has defended “a Spain of Spains” and a “polyphonic and polycentric” territorial model. The head of the Consell has added that also in the Valencian Community “this way overcoming centralism and open to difference enriches the whole.” Some statements that take place within a week in which the Community has resumed a strategic alliance with Catalonia to advance the change of territorial model.

During his speech, the head of the Consell pointed out that “circumstances force us to give a fair, social and agile response”, and that this response “does not consist of central or peripheral independence movements.” “The way – he has assured – is co-governance, that is, a better shared government to serve citizens more effectively.”

For the president, “also in the Valencian Community that way overcoming centralisms, and open to difference, enriches the whole”. In this line, he assured that, in the current situation, “it has been crucial to have the voice and the gaze of the city of Alicante and the province of Alicante in aspects such as the Alcem-nos agreements for the recovery of the Community Valencian “. “Therefore, today the territorial debate must align the rules with our current reality and with our vision for the future,” he said.

For her part, the vice president of the Consell and Councilor for Inclusive Policies, Mónica Oltra, also referred to co-governance, noting that “it has been revealed as highly positive for the management of public interests. “In the first place”, he added, “because plural gazes are always broader than uniform ones. But also because codecision is the foundation of co-responsibility ”.

In addition, the vice president of the Consell has stated that the decisions “are more adequate and correct when they are adopted with proximity measures”, to then highlight that “this is the political greatness of the State of Autonomies, which in recent months has been responding in very effective way to meet the challenges caused by the health, economic and social alarm ”.

“This year we are rediscovering that raising, caring and curing are the actions on which life is based and sustains our own essence as a species,” he stressed.

The president of the Generalitat has explained that there are currently five challenges that he wants to face: “overcoming the macrocephalic Spain of inefficient centralism, achieving equitable Spain with fair financing and fiscal harmony, moving towards a co-governed Spain without independence or nationalism. exclusive, take care of the invisible Spain of so many forgotten lands and oxygenate the depopulated Spain of the demographic winter ”.

Likewise, Ximo Puig has defended the plural and diverse reality of both the Valencian Community and Spain, ensuring that “a land must be loved as it is, not as one would like it to be, because the opposite is interest, dominance and oppression “.

During his speech, the head of the Consell highlighted that the Constitution “changed our collective course, for the better, with freedom, peace and democracy”, however 42 years later “our institutional and emotional architecture requires a change ‘de jure’, or ‘de facto”. In this sense, he has claimed an update of the basic norm of all Spaniards, indicating that “it is foolish for us to constrain and paralyze the fear of updating a BOE of 1978”. In addition, he assured that it is not “about unity of destiny in the universal, flags, or identitarianisms, but about rights, equal opportunities, and a better adaptation to the new, digital and sustainable world, which is imposed” .

Puig has referred to as an example of coexistence “the universal artist Joan Genovés, who died this year, and is remembered for his community gaze, his breath of freedom, and his conciliatory spirit.”

Likewise, he also remembered the professors Ernest Lluch and Manuel Broseta, both awarded by the Generalitat, as “two key people for our constitutional rights and freedoms who fought, paying with their lives, for coexistence”.

Ximo Puig has assured that Ernest Lluch, whom he has referred to as the ‘father’ of universal health, and Manuel Broseta, whom he has defined as a “key leader in the approval of many autonomous statutes”, “were two great people with different political looks and the same unfortunate end, both assassinated by ETA “.

Finally, the head of the Consell has highlighted the legacy of Eglantyne Jebb, founder of Save the Children 101 years ago and the architect of having placed the rights of girls and boys on the world political agenda. “His legacy in the Valencian Community is maintained thanks to the great family of workers, volunteers and partners that make up Save the Children, who every day support a crucial part of the social shield of our Constitution,” he concluded.