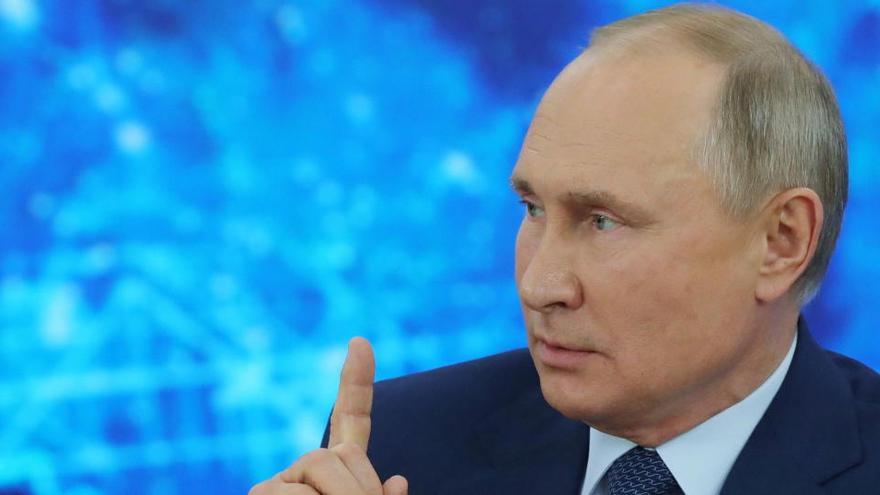 The President of Russia, Vladimir Putin, has assured this Thursday that if someone had wanted to poison Alexei Navalni, he would have ended up dead, while admitting that the security services “monitor” the Russian opposition leader.

In his annual press conference, in which this year he appeared by videoconference from the Kremlin, the Russian president has assured that Navalni has the support of the “special services of the United States” and he has denied that the Russian security services tried to poison him.

“We know what this is. It is not an investigation but a attempt to legitimize materials from US special services“, said the Russian president, in response to a question from the Bellingcat, The Insider, CNN and ‘Der Spiegel’ investigation that points to the involvement of the Russian Federal Security Service (FSB) in the Navalni poisoning.

“We do not poison him”

The Russian president has stressed that the Russian security services have not poisoned Navalni. “We don’t poison you. Who needs you? If someone wanted to poison you, they would probably have finished the jobPutin has assured.

In this regard, he has stated that when Navalni’s wife asked him to be transferred to Germany for medical treatment, he “immediately” authorized the transfer.

On the other hand, Putin has also referred to changes in the Constitution that will allow him to remain president of the country beyond 2024 and has assured that he has not yet decided if he will run again as a candidate that year.

“Was it worth it or not to change the Constitution? I have a universal mandate. You must ask yourself: Is this for the good of the country? If it is, then it is worth doing. I have not yet decided if I will perform again in 2024. To do it or not to do it, I’ll see. My priority is the stable development of the country, “he explained.” More effective “health system

In relation to the new coronavirus pandemic, Putin has defended the actions of the authorities and has assured that the Russian healthcare system has turned out to be “more effective” compared to “the rest of the world.” No one was prepared for something on this scale. Compared to the rest of the world, our healthcare system has proven to be more effective, “he said.

The president has said that Russia learned from other “friendly” countries when the pandemic hit and “gained time immediately” with the closure of its borders. “We have added 270,000 beds and we have built 40 treatment centers,” he highlighted.

When asked if he has received the Russian vaccine against the Sputnik V coronavirus, he said that he has not yet and that he will get it “as soon as possible.” “I am quite respectful of the law. I will listen to the recommendations of the specialists, so I have not put it on yet but I will put it on as soon as possible. I see no reason why not to get vaccinated,” he said.

According to the newspaper ‘The Moscow Times’, Experts have discouraged people over 60 from getting the coronavirus vaccine Sptunik V. Putin has also said that Russia does not have enough equipment to produce “the necessary number of vaccines”.

Faced with a question about the alleged Russian interference in the 2016 US presidential elections, the Russian president has denied that there was interference by Russian hackers in getting Donald Trump elected. “Russian hackers did not help Trump to be elected and did not interfere in the internal affairs of this great power. This is a provocation and the reason for the deterioration of relations,” he said.

In his opinion, relations between the United States and Russia “have become hostages to the political situation” in the United States. “I trust that Biden understands what is happening. He is an experienced person, “he said.

On the other hand, the president has stated that Russia will continue to support eastern Ukraine and increase its economic support in this area controlled by pro-Russian separatist militiamen. “Russia has supported Donbas and will continue to do so. We will even increase our support for Donbas,” he said.

This endorsement will also translate into a “support to the industry” and “the solution of social problems” and the “infrastructure problems”, according to Putin, who has reproached the Ukrainian authorities for having done nothing to achieve a solution to the conflict in the east of the country.

“Nothing has been unlocked in terms of the economy and social sphere. Nothing has been done in terms of a political solution,” he argued. Putin has defined the ceasefire in eastern Ukraine and the exchange of prisoners between the sides of the conflict as a “great achievement”.

Asked about the plans of the Government of Ukraine to stop complying with the Minsk agreements and review several of its main provisions, the Russian president has emphasized that this cannot be done unilaterally.

“I want to draw attention to the fact that the Minsk agreements were endorsed by the resolution of the UN Security Council and they acquired the force of international law. Therefore, it will not be possible to review them unilaterally, “he said, according to the Sputnik agency.” The conflict in Donbas will be resolved sooner or later “and the specific date will depend on Kiev, Putin concluded.