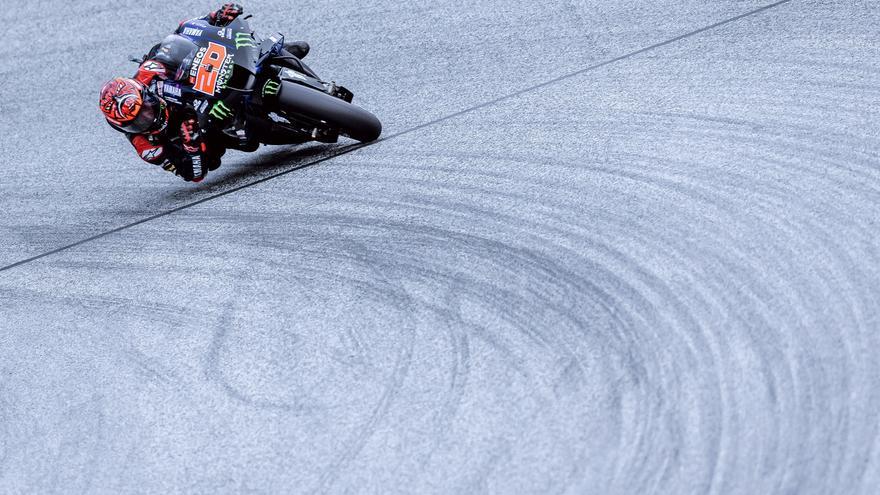 Frenchman Fabio Quartararo (Yamaha YZR M 1), leader of the MotoGP World Championship, arrives at the Grand Prix of San Marino and the Rimini Riviera, which is going to be played in the Marco Simoncelli circuit of Misano Adriatico and that, a priori, seems a complicated scenario for their interests due to the situation in which some of their main rivals find themselves, especially the Italian Francesco ‘Pecco’ Bagnaia (Ducati Desmosedici GP21).

The first victory of the pupil of Valentino Rossi in Aragon comes at an important moment of the season, second in the world championship, he now faces one of the first two races “at home”, because for him both this first date in Misano and the one on October 24 are at home, because the VR46 Ranch where he usually trains is barely ten kilometers from there.

Bagnaia achieved his first victory in MotoGP and as an official Ducati rider against a Marc Márquez (Repsol Honda RC 213 V) increasingly fit and full, which put the Italian on the ropes in the last two laps, but he was able to respond effectively and emphatically to all the attacks from the Spaniard, which undoubtedly allows him to arrive very motivated at the San Marino race.

Although Quartararo maintains a comfortable advantage of 53 points over Bagnaia and 57 with respect to the Spanish Joan Mir (Suzuki GSX RR), which was third on the Alcañiz track, the eighth position at Motorland Aragón should be a wake-up call to avoid future shocks as a couple more concessions in the five races that remain to be contested could enliven the the spirits of his rivals and complicate the Frenchman’s first world title.

Both the Quartararo and the Bagnaia o Mir A Marc Márquez who seems to be in better physical condition can subtract points from them. and proof of this was his performance at Motorland Aragón, where even though it was a very favorable circuit for his conditions and those of the Repsol Honda, he showed that he was much more recovered and, what is more important, with his head very in place.

Márquez tried to overcome Bagnaia in the first laps, when the Italian was shooting and seeing that it was not going to be easy for him and that he could make a mistake like England’s, he decided to stay behind in the wake of the Italian’s Ducati, study him and wait for the moment to overcome it, that everyone knew would come in the last laps.

The last two laps that resulted from a real heart attack, with more than a dozen overtaking between the two and which ultimately ended in favor of the Italian, who arrives at Misano Adriatico full of satisfaction, almost as much as Repsol Honda must be for face the last five races of the season and even if it is already thinking of a 2022 in which he wants to be the same as always.

For his new teammate, also Spanish Pol Espargaró, the situation is quite different, as a newcomer to the Repsol Honda team, his adaptation to the Japanese motorcycle is proving much more complicated than he himself might have thought, but little by little and apparently in the last great prizes, he is closer to achieving your goal.

The Suzuki riders, the Spanish Joan Mir and Alex Kidneys, and the rest of Ducati representatives, with the Australian Jack Miller in the lead but without forgetting the Spanish Jorge Martin and to french Johann Zarco, should be among the protagonists of the Italian race, in which their last winners in last year’s double grand prix, the Italian Franco Morbidelli and spanish Maverick ViñalesThey will not be in the same conditions as then.

In Morbidelli’s case, his knee operation keeps him in dry dock, while in the case of Viñales his hasty departure from Yamaha and his arrival, equally premature for Aprilia, does not allow him to be optimistic enough to fight for the podium and his job and goal will be to continue growing on a motorcycle, the RS -GP, which is completely new to him.

Viñales will not have it easy, but his teammate Aleix Espargaró is another story because the latest results of the Aprilia rider allow him to be very optimistic before this first appointment at Misano Adriatico, a circuit on which the Noale manufacturer has a lot of information. having carried out quite a few tests both in the preseason and during the current year thanks to still having a series of championship concessions that allows it.

KTM riders are the ones who still continue to give one of lime and another of sand, because when the Portuguese Miguel Oliveira is up, the South African Brad Binder stops due to difficulties, and vice versa and the KTM RC 16 does not finish working as it should in all scenarios, so that should continue to be its main objective, to evolve a motorcycle that at the end of the season the Spanish Iker Lecuona will leave precisely when he is achieving better results.

Lecuona is destined to leave MotoGP at the end of the season to reach the Superbike world championship at the hands of Honda, and perhaps that is why his goal for the remainder of the season will be to try to leave the best possible taste in his mouth.