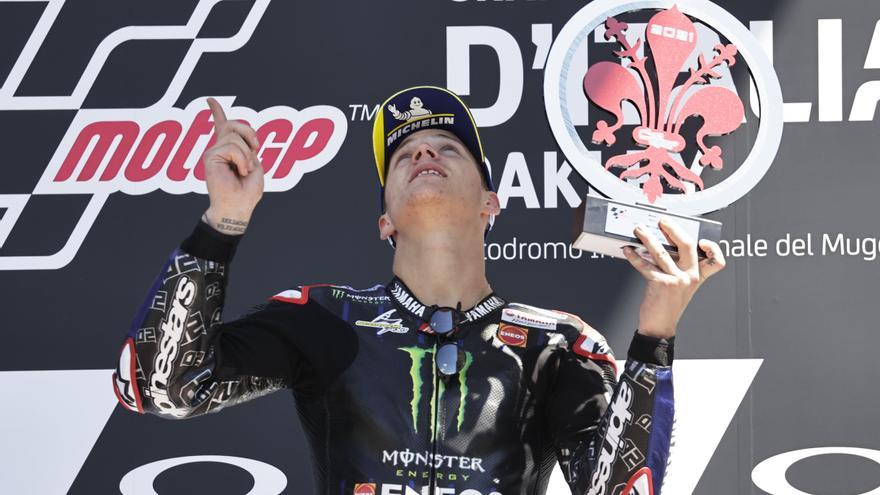 The French Fabio Quartararo (Yamaha YZR M 1) achieved a final victory in the Italian Grand Prix MotoGP race that has been held at the Mugello circuit and that allows him to increase his advantage at the head of the provisional classification of the world championship.

Although his rivals knew that they should not allow the Frenchman to impose the rhythm that he exhibited during training, It took four laps for the Yamaha rider to get first to literally sentence the race.

After him there were numerous skirmishes and mishaps that were resolved with the second position of the Portuguese Miguel Oliveira (KTM RC 16) and Spanish Joan Mir (Suzuki GSX RR) third.

Moments after concluding, the Lusitanian, who had exceeded the limits of the circuit in turn five of the last lap, had to give up second place the current MotoGP world champion, but moments later, a new decision from the Race Direction returned it to him as Mir also exceeded the limits at that same point.

Surprising start of the MotoGP race because when all the riders reached their positions in the starting formation after completing the warm-up lap, the Italian Enea Bastianini (Ducati Desmosedici GP20) was on the ground at the end of it when he rammed the Frenchman’s motorcycle from behind Johann Zarco (Ducati Desmosedici GP21), while his rivals shot out when the traffic light went out and the stewards removed their motorcycle from the track.

At that moment, when the traffic light went out, the Italian’s Ducati “Pecco” Bagnaia he was the leader of the race, chased by the author of the “pole position”, the Frenchman Fabio Quartararo (Yamaha YZR M 1), who could not hold the maximum speed of Borgo Panigale’s motorcycle.

And quickly there was another outstanding news, the fall of the Spaniard Marc Márquez (Repsol Honda RC 213 V), that was played with the South African Brad Binder (KTM RC 16) in turn three of the second lap and crashed when he was tenth, and whose mishap the Italian had to avoid Franco Morbidelli (Yamaha YZR M 1) hitting the gravel.

Marc Márquez’s touch with Binder that caused his fall in the second round of the #ItalianGP 🇮🇹#MotoGP 🏁 pic.twitter.com/QWVhXSIsNx

There was no truce for surprises since at turn nine the Italian Bagnaia, who was leader of the race and left the leadership on a platter to Quartararo, although his compatriot Johann Zarco (Ducati Desmosedici GP21) saw the opportunity to lead it and overtook it before the second lap was completed.

Zarco and Quartararo engaged in a series of overtaking that allowed the Portuguese Miguel Oliveira (KTM RC 16) to stick to them and complying with Ducati’s strategy, which was to prevent the fastest rider on the track, the world leader, to get ahead and escape from all his rivals.

After that head trio, another one formed by the Australian Jack Miller (Ducati Desmosedici GP21) and the Spanish Alex Rins and Joan Mir, the two official riders of the Suzuki GSX RR, with Aleix Espargaró (Aprilia RS-GP) and the South African Brad Binder (KTM RC 16), a little further back.

On the fourth lap, Fabio Quartararo gave a good account of Zarco and began to set his own pace to get with some speed more than eight tenths of a second ahead of Zarco and with Oliveira already more than 1.2 seconds away, who formed the leading group .

Behind them, Aleix Espargaró and Brad Binder caught up with Miller, Mir and Rins and between them they began to lavish a series of overtaking that sought to define the positions but also benefited the leading trio, which was gradually escaping.

In the eighth lap Alex Rins managed to give a good account of Miller, who was doing some “stopper” in that group and began to shoot hard to try to catch up with Zarco and Oliveira.

At that time, another of the contenders for the title of the season, the Spanish Maverick Viñales (Yamaha YZR M 1), did not show signs of being able to recover positions from the thirteenth place he occupied at the start and after eight laps he was twelfth.

Before the halfway point of the race, Fabio Quartararo had already consolidated his leadership with an advantage of more than two seconds and was increasing. The race was practically sentenced except for error or fall of the French.

With Mir ahead of the chasing group and Rins almost at his wheel, the differences regarding the podium positions occupied by Zarco and Oliveira narrowed substantially until he stuck to them in the sixteenth lap.

On that same lap, perhaps warned from his workshop, Oliveira advanced to Zarco to try to consolidate the second position, which forced Mir and Rins to overtake the Frenchman as soon as possible to prevent the Lusitanian rider from escaping, which Mir did a lap later to gain a few meters of advantage that would prevent the Ducati team from overtaking him due to speed on the finish line. .

A lap later Rins also gave a good account of Johann Zarco, although on the nineteenth lap it was going through the floors at turn fifteen -his fourth crash of the season- and Joan Mir got behind Miguel Oliveira.

NOOOOO! 😨 Back to the ground when he was fighting with the best! Fourth zero followed by Álex Rins! #ItalianGP 🇮🇹 #MotoGP 🏁 pic.twitter.com/7l3XbiAd31

From there to the lowering of the flag nothing. Fabio Quartararo indisputable leader, pursued by Oliveira and Mir.