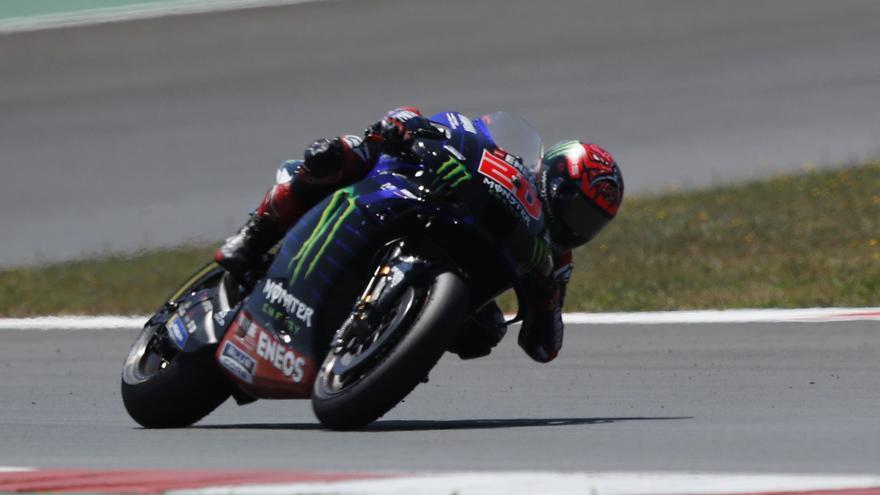 The French Fabio Quartararo (Yamaha YZR M 1) got his second win in a row and with it new world leader, by winning the Grand Prix of Portugal from MotoGP in the Portimao circuit, where the Spanish Marc Márquez (Repsol Honda RC 213 V), on its return to racing after nine months of inactivity, was seventh.

Quartararo achieved an unappealable and solo victory, while for the rest of the podium positions the Italian Francesco “Pecco” Bagnaia (Ducati Desmosedici GP21), the Spanish Joan Mir (Suzuki GSX RR) and also Italian Franco Morbidelli (Yamaha YZR M 1), who crossed the finish line in that order.

Marc Márquez’s seventh place was epic and the suffering suffered throughout the nine months of suffering from the injury gave free rein to his feelings with the tears of satisfaction that fell down his cheeks when he received the warm applause of his entire team as he entered his workshop. An unmistakable sign of all the nerves and pressure that the eight-time motorcycling world champion had already shaken off.

Once again one of the first images of the MotoGP race featured the Spanish Marc Márquez (Repsol Honda RC 213 V), who from sixth position, second line of starting formation, he did nothing more than constantly stretch his right arm to try to have as few physical problems as possible during the 25 laps scheduled.

The most deserving of rounds of applause! 👏👏👏

Impressive departure of the French Johann Zarco (Ducati Desmosedici GP21), as well as Márquez, who from sixth place came fourth to the end of the straight and in a couple of corners he was already in third position, while once again the Yamaha made a disastrous start, with Fabio Quartararo sixth despite starting from pole position and the Spanish Maverick Viñales penultimate before concluding the first lap and with obvious performance problems as he could not go down from 1:42 to complete the lap.

Zarco tried to keep up his pace while the Suzuki GSX RR of Alex Rins and Joan Mir They were placed in his wake, with Marc Márquez fourth as he went a little long after hitting Mir’s bike from behind, although without consequences for either of them.

He was advancing positions little by little

Quartararo was advancing positions little by little while Márquez was losing ground to the same extent when he was overtaken by Fabio Quartararo, the Australian Jack Miller (Ducati Desmosedici GP21), who recently operated on the compartment syndrome in his right arm, and the Spanish Aleix Espargaró ( Aprilia RS-GP).

In the third lap Alex Rins was able to put the wheel of his Suzuki into Johann Zarco, although the Frenchman did not take too long to regain the place due to speed, with Quartararo third, ahead of Mir and a plethora of Aleix Espargaró, who was already fifth, while the Spanish took the path of the workshops Pol Espargaró, with performance problems on the rear tire of his Repsol Honda RC 213 V.

Two laps later, in the fifth, Fabio Quartararo had already given a good account of Johann Zarco, as well as the Spanish world champion Joan Mir, while the Australian Jack Miller, who was sixth at the time, was on the floor in turn three by locking the front wheel under braking.

Shortly after a new disappointment when the Portuguese Miguel Oliveira (KTM RC 16), the local idol and winner of the last edition of the Portuguese Grand Prix, suffered a fall, while at the top Rins assumed the role of leader and began to pull, taking after his wake up Fabio Quartararo and a little further back Johann Zarco and Joan Mir, with the Italian Franco Morbidelli (Yamaha YZR M 1) as the bridgehead with the chasing group, in which in ninth place was the Repsol Honda rider and six-time MotoGP world champion.

Fabio Quartararo waited for his moment to overtake Alex Rins, in the eighth lap and, from there, print a change of pace that Alex Rins tried to hold, unsuccessfully, ahead of Mir and Zarco, who had some advance on him rest of pilots.

At the pace of the fastest lap of the race, with a time of 1: 39.884, Fabio Quartararo tried to escape his pursuers, but Alex Rins endured the “pull” of the French, even with a fast lap and a new record included, 1: 39.598, with Mir and Zarco somewhat more off the hook and Morbidelli making an effort to “hunt down” that couple, although the Italian already had a warning for exceeding the track limits three times and the “shadow” of a long penalty lap loomed over him.

A little further back, the Italian Valentino Rossi (Yamaha YZR M 1) who was climbing positions from far behind, crashed at turn eleven after having overtaken on hermano Luca Marini (Ducati Desmosedici GP20).

💪 @ Marcmarquez93 is still on course for the top ten!

Behind, little by little Marc Márquez “warmed up” and improved his personal records, although from an unusual ninth position for him, in the same group as South African Brad Binder (KTM RC 16) and Spanish Aleix Espargaró.

Quartararo maintained a very high constant rhythm that forced Rins to work hard if he wanted to stay in the wake of the Frenchman’s Yamaha, which led to a new fastest lap record with 1: 39.450, but shortly after, in the fifth turn, the Spaniard was on the ground when he exceeded the limits of his tires and that left the path completely clear for the Frenchman on his way to his second consecutive victory.

Also Read  How to whiten teeth at home

The Frenchman was left alone at the front of the race with a chasing trio led by the Italian Francesco “Pecco” Bagnaia (Ducati Desmosedici GP21) and with Joan Mir and Johann Zarco, who shortly after went to the ground at the entrance of turn eleven , which made him mathematically lose the leadership of the world championship.

The rhythm imposed by Fabio Quartararo made paying a very high bill many of his rivals on the way to victory and championship leadership, who ended up on the floor.

With Quartararo on the podium, Bagnaia and Mir finished, ahead of Franco Morbidelli, Brad Binder, Aleix Espargaró, Marc Márquez, Alex Marquez, the Italian Enea Bastianini (Ducati Desmosedici GP20) and the Japanese Takaaki Nakagami (Honda RC 213 V), who was tenth despite the physical problems that he dragged after his strong crash on Friday in practice.

Maverick Viñales had to settle for eleventh position after a disastrous start, with Iker Lecuona (KTM RC 16) in fifteenth place.