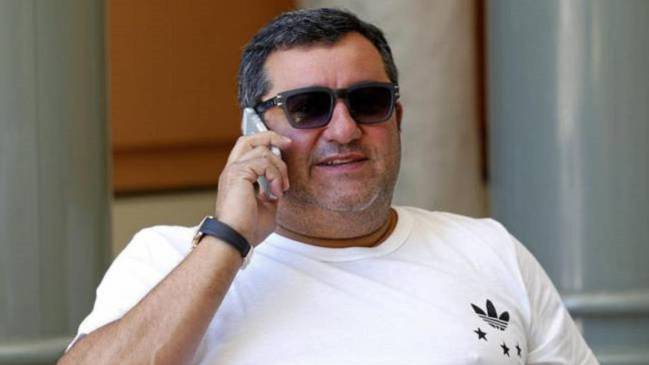 Zlatan Ibrahimovic was Ajax’s rising star at the time. Tired of being compared to Marco Van Basten and already unleashed in his appetite for being number 1, he called a journalist friend to recommend an agent. He received two options: the agency that took David Beckham or a guy who his interlocutor considered a mobster. “I want that one,” replied the Swedish striker. It was about Carmine Mino Raiola (Nocera Inferiore, Italy, 1967), who represented his teammate, left-back Maxwell, and had almost the same thirst for triumph. Ibrahimovic, as he tells in the autobiography Soy Zlatan Ibrahimovic (Corner, 2015), soon discovered that they were soul mates and began one of the most zero relationships in football history. The forging of the method of an agent who last year was able to generate 721 million in contracts and who is now walking through the offices of the great European clubs auctioning the star of Borussia Dortmund, Erling Haaland.

The first meeting was in a hotel. Ibra showed up with his gold watch and Gucci leather jacket. He parked his Porsche Carrera turbo outside the door and went inside expecting to find a guy in a pinstriped suit and tie. Raiola wore a Nike T-shirt, jeans, and a belly like Tony Soprano’s. He had ordered more sushi than a football team could eat and listened to everything his represented future had to say while bingeing. When all seemed to be going well, he pulled out some printed papers and began listing the stats for great forwards. “Inzaghi, 25 games and 20 goals; Vieri, 27 games and 24 goals; Trezeguet, 24 games and 20 goals; Ibrahimovic, 25 games and 5 goals. Do you think I can sell you with stats like these? Sell ​​your cars and your watches and start training hard, ”he told her. The Porsche Carrera, by the way, was ended up being driven by the agent’s father.

Raiola, the agent who best embodies the change in players’ relationships with clubs in recent times, arrived in Amsterdam at the age of one after a 1,900-kilometer drive from southern Italy. His father, who had been a mechanic in Salerno, opened a pizzeria in Haarlem which he called Napoli. Raiola worked there since he was little cleaning, serving as a waiter and even preparing the pizzas. He studied law, he trained with languages ​​(he speaks seven). He expanded the business, bought and sold a McDonalds franchise in just two months, was sporting director for Haarlem and started working at a footballers’ representation agency (Intermezzo). There he opposed a law that existed in the Netherlands, according to which players had to be assessed using a series of parameters such as age and their statistics on the field. He had several clashes with the Dutch Football Association and soon built a reputation as a representative who swims against the current: his current war is against FIFA – an organization that he describes as a mafia – and his proposal to reduce agent commissions.

Raiola grew up, became independent and focused on catching big fish. “First you must be the best. Then the best paid ”, he usually tells them. He made good friends in football, such as coach Zdeněk Zeman (then Foggia coach and then Lazio and Roma), who allowed him to do his first business in Italy. In 1993 he sold Dennis Bergkamp to Inter and in 2001 he placed Pavel Nedved, who was then playing for Lazio, to Juventus for 41 million euros (where he won the Ballon d’Or). An operation that strengthened his name in calcium – today his main market together with the Netherlands – and allowed him to establish a fruitful relationship with Juve (Ibrahimovic, Pogba, De Ligt).

Raiola, whose only major failure in shaping a star has been Mario Balotelli, does not wear a suit and may appear in a tracksuit at meetings. Or in shorts and flip flops, as they feared he would come to the Bernabéu to negotiate for Paul Pogba in 2015 when he opened an auction similar to the current one with Haaland. Raiola doesn’t care about physical appearance. In fact, he purposely cultivates that slovenliness, he always explains, to mislead the negotiations. When he left for the Formula 1 Grand Prix in Monaco to deal with Moggi, Ibrahimovic’s move to Juventus came sweaty and panting in shorts and Nike shoes without socks. There he found the Juve manager smoking a cigar. “What the hell are you wearing to come?” “Have you come to see what clothes I’m wearing?” The agent replied. “They were enemies and then they ended up being close. They are the same face of a sport transformed into pure business ”, says a person who dealt with the Juventus manager for years.

The Raiola system is clear. Few players and a lot of mobility between clubs, whose managers usually end up facing him. Most of the big names have them in Italy: Lukaku, Mkhitaryan, Ibrahimovic, De Light, Donnarumma, De Vrij, Manolas… “He always ties them up at the right time, as with Haaland”, explains Marco Conterio, director of Tall Web Market, a medium specialized in the market and agents. “Very few of his clients have abandoned him. He has a very close relationship with them. He accompanies them on some trips, talks on the phone, advises them ”, he insists. With 99%, he says himself, they end up being friends. He’s the last great old school agent. “In the agency of Jorge Mendes, his great rival for market hegemony, many players have never seen him. But Mino deals with everyone ”, explains a person who knows both entrepreneurs.

The method, obviously, hinges on the commissions for each transfer. In Pogba’s Manchester United pocketed 48 million euros, as it became known through the leak Football Leaks who published The mirror (It was initially rated at 27). For Ibrahimovic’s pass to Barça in 2014, where he only played one season, he earned around 11.5 million euros. The trip to Madrid and Barcelona with Haaland’s father, experts in the football market believe, now also has to do with Raiola’s old obsession with placing a great player in the Spanish League (he currently has Rodrigo Ely in Alavés) , where Jorge Mendes has always dominated. The Norwegian will be his last great strategic move.