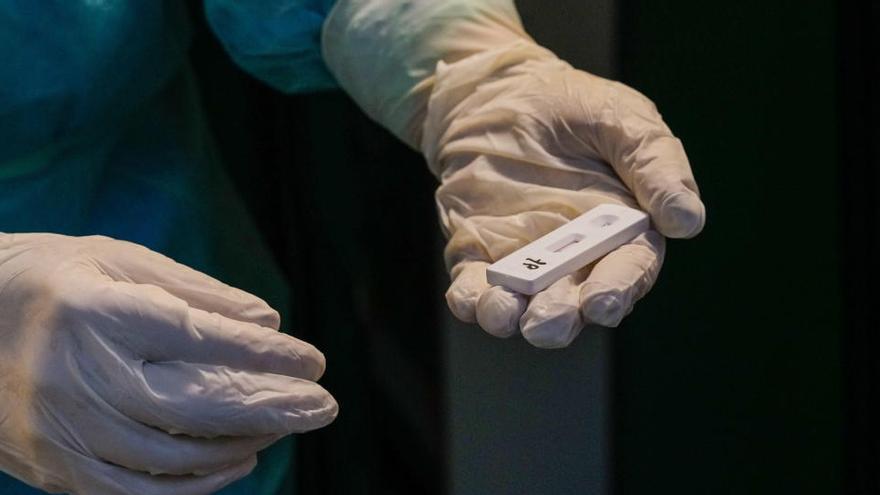 The rapid tests to detect antibodies of coronavirus they are already beginning to be distributed in Spanish pharmacies and will be sold under medical prescription, the distributor Cofrares reported this Saturday, when the pandemic evolves unevenly in Spain, with improvements in Madrid and worse data in Catalonia.

The tests are 90% effective, they are done with a finger prick and the result is obtained in 10 minutes, and thanks to them the population will be able to have access to this diagnosis, after the Spanish Agency for Medicines and Health Products (AEMPS) has given the go-ahead to their commercialization in view of the fact that they have a CE marking issued by a notified body.

This news has been known on the day when the epidemiological data provided by the communities show an uneven evolution in the different regions, with increases in incidence in seven of them, especially in Catalonia and Castilla y León, and a reduction of infections in another seven, among which are Madrid and Andalusia.

In addition to the Catalan region and the Castilian-Leon region, Galicia, Navarra, Euskadi, Murcia and Extremadura have offered negative data evolution of the virus, while Cantabria, the Balearic and Canary archipelagos, Aragon and Asturias join the Madrid and Andalusian communities in the reduction of new cases.

The pandemic continues to worsen in Catalonia, where the transmission speed (Rt) of the virus has grown this Saturday for the fifth consecutive day to 0.98, which means that 100 infected infect an average of 98 people.

The rate is three hundredths higher than this Friday, so the Government has decided to stop the de-escalation and phase 1 has been extended. The shopping centers and game rooms and meetings limited to 6 people will thus continue to be closed, at a particularly delicate moment as it is a bridge before Christmas.

Bad data is also recorded in Castilla y León, which has accounted for a significant increase in cases, specifically 44% from 394 new infected yesterday to 568 this Saturday, as well as 31 deaths, five of them in residences.

The region has also registered its third outbreak in a hospital facility in the last four days, with five patients in the Burgos hospital, adding to the seven this Friday in the Salamanca hospital and the eleven last Monday in the Miranda de Ebro hospital.

An increase in cases has also been detected in the Region of Murcia in the latest data, yesterday. They leave four deaths since the previous day and 211 infections, 44 more, as well as a positivity rate of 7.3%.

In Navarra, this Friday infections also increased with 99 new ones in 24 hours, 17 more than the previous day, in addition to five deaths. The positivity rate was 5.9%.

The same trend in Extremadura, where the 183 new positives registered this Saturday are 22 more than yesterday. The community has reported six deaths in one day.

Galicia has experienced a slight rise of new infections with 337 confirmed by PCR in the last 24 hours, 11 more than in the previous count, but active cases decrease significantly.

The latest data from the Basque Country, corresponding to Friday, have worsened, since although the number of new infections in one day was similar (520 on Friday and 519 on Thursday), the positivity rate rose from 5.2% to 6.5 %.

Half of the deceased in Madrid

Madrid is one of the seven communities where the evolution of the pandemic is positive, with 1,474 new infections this Saturday, 21 less than this Friday, and 8 deaths, almost half of the previous day, when there were 14.

Asturias has also offered downward data. Add 176 new coronavirus infections, 53 less than those recorded the previous day, and has reduced the positivity rate from 5.4 to 5.1%, thus remaining around the 5% threshold set by the World Health Organization to consider controlled the pandemic.

In the Andalusian region there are 1,286 new positives and 30 deaths from covid-19, which represents 26 cases and 10 deaths less than this Friday.

In Cantabria, 104 new cases of coronavirus have been reported, corresponding to yesterday Friday, 47 less than the previous day, and the number of hospitalized and patients in the ICU has also decreased: 6 and 4 less, respectively.

Less contagion on the islands

In the Balearic Islands, there are 184 new cases in one day, 39 less than this Friday, and two people have died in nursing homes. In addition, the positivity rate is 5.39%, lower than the 6.35% of this Friday.

In In the Canary archipelago, cases have also been reduced this Saturday, with 152 new in the last 24 hours, 14 less than those reported this Friday.

Another community with fewer infections in a day is Aragón. This Friday, 219 infections were registered, 37 less than on Thursday, but there were 13 deaths.

La Rioja has reported two people who died from covid-19 and a decrease in healthcare pressure, with 23 fewer hospitalized. Active cases in the community remain at 754.

In the absence of updated data from the Valencian Community, the Government of the region has announced that it will maintain its perimeter closure until January 15, but with exceptions on December 23, 24, 25 and 31, as well as January 1, when transit to other communities will be allowed to see relatives or friends. Nor has Castilla-La Mancha data been offered so far.