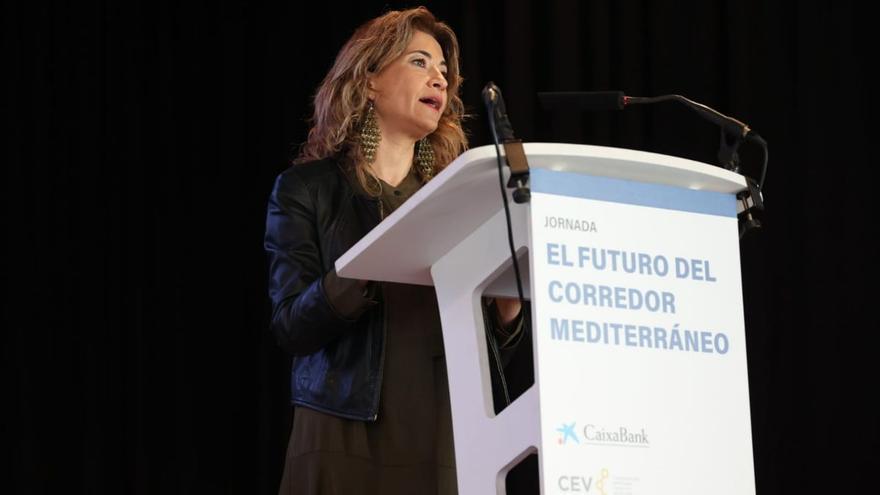 The Minister of Transport, Mobility and Urban Agenda, Rachel Sanchez, defended the steps that the Government is following in the Mediterranean corridor and stressed on several occasions the “unequivocal commitment” to this infrastructure. “There is no more than approaching the facts to verify it,” he assured. During his speech at the business conference organized by Mediterranean, a newspaper belonging to the same editorial group as this medium, to deal with this railway connection, He broke down the investments, of which a large part will come through European funds, and advanced that throughout this year the adaptation of the mixed gauge in the Valencia-Castelló section will be completed.

As for the actions carried out in recent times, “in these three and a half years of government we have increased the length of the Mediterranean corridor by 233 kilometres, We have put into service the AVE to Granada, the Alcúdia-Moixent section, the Vandellòs variant and the AVE to Elx and Orihuela, where, in addition to radically improving Alicante connections, we value the first part of the AVE route to Murcia”.

(You can see the day in this video)

Sánchez reported that in “all the communities through which the Corridor runs, there are works under way, to which must be added the set of construction projects and informative studies on which we are working.” One of the most relevant the Valencia tunnel and the new high-speed rail between Valencia and Castelló, which is now in the informative study phase.

About these works, he defined that it deals with the “third phase” of the infrastructure. “The first came with the arrival of the AVE to Castellon through a mixed gauge track in 2018, and this year we will finish the second phase with the construction of the mixed gauge on the second track of València-Castelló, thus completing the works in this section”, he commented. In addition, he assured that this second part will have a beneficial effect on the suburban traffic, since by having two tracks with mixed gauge it will be possible for the high-speed services to Castellón “to stop interfering with the Cercanías services, which We will improve the operability on the C-6 line”.

Regarding the investments destined to carry out the Corridor, the minister explained that since June 2018 “we have approved the bidding for contracts for an accumulated amount of more than 3,318 million, at a rate of one tender per week, with more than 212 works files in just 3 and a half years”, so “there are few projects, not transport projects, but in general that have received so much financial support from this government in 2021 and 2022”. He assured that in two years “We have allocated investments that quadruple those of the 2018 budget. It could be said that, with these investments, We have reduced the term that the previous government had set for us by two years. And this is a path we are committed to continuing. Because we are convinced of the benefits of this infrastructure and of what it will mean for the Mediterranean arch and for Spain as a whole”.

Of this money, “we are going to dedicate more than 1,556 million euros of funds linked to the Recovery and Resilience Mechanism of the European Union to the promotion and acceleration of the construction of different sections of the Corridor in which we are already working”, explained Sánchez. To this “we must add other actions that we are going to develop in parallel, such as the derived from the aid for sustainable transport -mainly the railway-, which should represent a very large boost for freight traffic; the purchase of Renfe rolling stock, the largest in history; and the arrival of the liberalization of the passenger sector”.

To the autonomous territory they are destined for this year 387 million euros, with which “almost one out of every 4 euros budgeted in the Mediterranean corridor will be invested in the Valencian Community”. for the stretch La Encina-Xàtiva-Valencia, 189.8 million have been budgeted. “Some funds that will allow, once we finish this connection, that the travel time between Valencia and Alicante will go from the current hour and a half to just one hour,” he announced. Two of the other major measures are the adaptation to the international width of the section Valencia-Castellón-Vandellòs, and the works for the adaptation to mixed width between Valencia-Almussafes for 11.5 million. He also made reference to the development of intermodal and logistics terminals, such as the one necessary in the Castellon port or the study of the new rail access to the port of Sagunto.

With all this agenda, the head of Transport explained that at the end of the legislature “We will finish the works that we currently have in execution between Almussafes and Fuente San Luis, which will allow us to value the connection of Ford Almussafes with the port of Valencia, thus improving the possibilities of a sector as important in Spain as the automotive sector”. As for the standard gauge connection between Alicante and Valencia, “it will be well advanced. We will have finished the Iberian gauge track and we will be well advanced in changing the gauge of the Encina junction, with which we will find ourselves at the gates of connecting the three provincial capitals of the Community with standard gauge, with which the travel time between Valencia and Alicante will go from the current hour and a half to just one hour”.

Also Read  The trial for the death of George Floyd against Derek Chauvin in the US begins: "What is judged is how far freedom and justice have come"

Regarding the business sector’s need for the Corridor to end, Raquel Sánchez, the Corridor “is an infrastructure subject to progress and constant improvement; It will be that we always continue to improve it, that it absorbs more and more passenger and freight traffic and that it allows us to transport ourselves in a more sustainable and efficient way”.