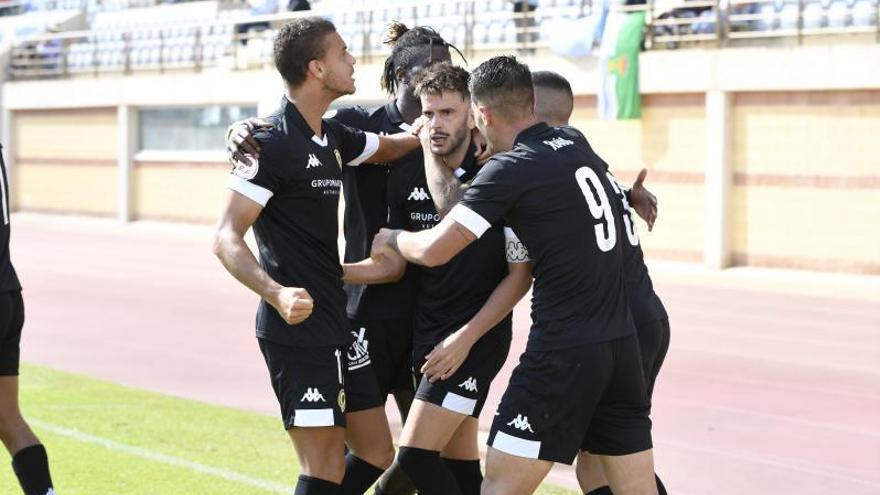 Forcing yourself to win outside what you give away at home is an uncomfortable, unnecessary exercise, inappropriate for a club that aspires not to fall behind the leading group, to be inside it, even. Thinking of a bright future with a present so full of chiaroscuro is reckless and exhausting. We must recalculate the route, rethink the initial concept and assume that ideas, no matter how good they are, must be able to put them into practice, and that is the task of the footballers, first, and, above all, of the coach, who is who chooses them.

The commitment to the three center-backs that Mora used yesterday to mirror Eljido’s approach, positioned identically on the field, failed in the first half. The Almeria, in the relegation zone, unable to win in their battered field, who have lost three of the four games they have played there, took the initiative and created all the real danger until the break.

Atlético Levante’s slap scared, hurt. The nightmare of the easy exit from high pressure with long balls to Faraj caused Hercules yesterday to want to be very close in defense, but this time closer to his goalkeeper than to his rival. He was wrong.

Hercules fans celebrate the Blue and White goal in the stands. Carlos Barba

The return of Tano updated the bet on the three centrals and the two lanes. Ahead, two midfielders with a destructive vocation, Bikoro and César Moreno, and three forwards up. Seven footballers to contain and, even so, no stolen ball in the entire first half and, in attack, a single presence within the El Ejido area. Terrible balance.

The figure of the deep sides only makes sense if they are really, if they have the route open, if Hercules takes over the ball. Otherwise, the space is shortened and the circulation of the balloon is crowded.

Sergio Mora realized it, located the weakness and covered the drain because the hope of winning was escaping. He did it after his opponent once again highlighted another factor that is already unquestionable: Jesús Fernández suffers to the point of horror when he has to decide whether to leave his goal and exhibits prodigious reflexes while with both feet on the ground, under sticks.

The Real Madrid exporter failed in all the outings. He measured badly in the two most flagrant ones, the first ended in a goal (annulled due to an alleged lack of the striker) and the second was sent by Lucho to the crossbar with his head. In between, he invented an impossible foot to stop a ball that he could barely see through the forest of legs and that arrived with good power. He was able to condemn the team, but this time he saved him and, incidentally, he saved himself and his coach.

The Hercules coach left Pedro Sánchez and Chuli in the shower to introduce Elliot and David Sánchez. With this simple movement he unblocked the risers, lightened the weight of the attack and injected energy into the first line of pressure. The result took effect immediately. The better-positioned Blue and Whites won the zone battle and, most importantly, began to increase the duration of their possessions and render their rival’s possessions useless.

The Tenerife native brought the overflow, drew diagonals inwards and made it possible for Álex to climb. Whenever the left-handed winger reached the baseline, he created danger. The playmaker covered the free space in front of the midfielders and allowed them both to join the attack. The spare parts applied to the system what neither Chuli nor Pedro knew how to give it. Good for the coach and his assistants.

The only goalkeeper who has won a Champions League in the entire Second RFEF stopped appearing. The heir to the mythical Poli Ejido turned off, the Hercules deactivated it, which began to resemble a recognizable block with a powerful presence on all lines, which won the duels that it lost in the first half, which continuously recovered balls, which did not he let his enemy think. This is how he won the game, this is how he added three vital points, this is how he reconnected with the confessable feelings of the teams that overcome their vices.

César Moreno benefits from the pressure en bloc. He follows the action closely, on top of his opponent, blocks his path and steals the ball. Hide the ball while moving horizontally and think. A few meters away, Raúl Ruiz, with all the right lane for him, goes back up, offers a solution to the former Elche midfielder and ends up receiving. Trim inward. He adjusts the leather as he steps into the area, watches the goalkeeper and connects a dry right hand at mid-height that sneaks into the goal. Fifteen minutes had elapsed since Sergio Mora’s timely maneuver.

Then what he played. The other football. The interruptions, the simulations waiting for a counter to close the match. Elliot had it, but he decided badly. All teams, and even more so those in the fourth category, have defects and virtues, the key is to know how to enhance the second to protect yourself from the first. Did the Hercules do it? Yes, but only in the second part.

Sergio Mora: «We have known how to win in an impossible field»

The Hercules coach underlines the value of victory in El Ejido. «We have managed to win in an impossible field, which was very bad. In the first half we weren’t able to get used to it, but in the second we have improved, we have been better planted and we have done what we had to do, score whatever we had, “explained the Madrid coach at the end of the match. “We needed more muscle in the center of the field because we were losing all the duels and the divided balls. We have modified the system and it has worked for us, we have played much better, “said Mora. “We want to find a definite eleven, but we are still working on it,” he revealed. “We have missed Tano so much.”