In a surprise move, the Monetary Policy Committee (MPC) of the Reserve Bank of India (RBI) on Wednesday unanimously decided to increase the repo rate by 40 basis points (bps) in an off-cycle meeting, citing inflation concern.

This was followed by a 50 bps hike in the cash reserve ratio to 4.5 per cent, which will drain out Rs 87,000 crore liquidity from the banking system.

This was the first repo rate hike in 45 months — since August 2018. The increase in the repo rate will lead to lending rates getting pushed up because 40 per cent of the loans of commercial banks are linked to it.

The 10-year government bond shot up 26 bps, with the street expecting another rate hike in the June policy. As a result, the standing deposit facility (SDF) rate is now at 4.15 per cent and the marginal standing facility (MSF) rate at 4.65 per cent.

The SDF and MSF constitute the lower and the upper end of the interest rate corridor. While hiking the repo rate, the MPC decided to stay “accommodative” but dropped the word “stance” from its resolution — for the second meeting in a row. 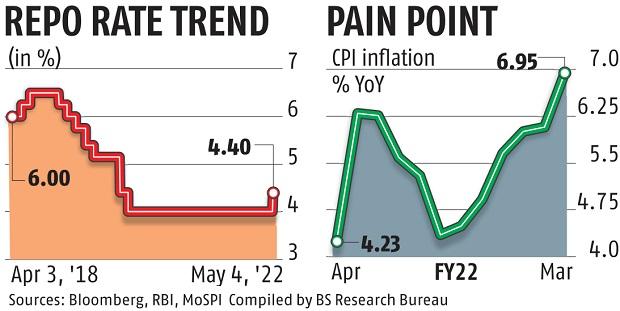 “The strengthening of inflationary impulses in sync with the persistence of adverse global price shocks poses upward risks to the inflation trajectory presented in the April MPC resolution,” Das said.

The March inflation number was close to 7 per cent, much above the central bank’s upper tolerance threshold of 6 per cent. The April inflation numbers too are expected to be high.

“High frequency price indicators for April indicate the persistence of food price pressures. Simultaneously, the direct impact of the increases in domestic pump prices of petroleum products – beginning the second fortnight of March – is feeding into core inflation prints and is expected to have intensified in April,” Das said.

In April, the MPC increased the inflation forecast for FY23 to 5.7 per cent. There is a grim possibility that the MPC will fail to achieve its inflation mandate, that is, maintaining average inflation at 2-6 per cent for three consecutive quarters.

The governor said the hike could be seen as a reversal of the May 2020 rate reduction. In May 2020 too, during the peak of the first wave of the pandemic, a similar off-cycle meeting was called and the repo rate was reduced by 40 bps.

The RBI responded to the pandemic with sharp interest rate cuts in March 2020 in a similar off-cycle policy meeting. 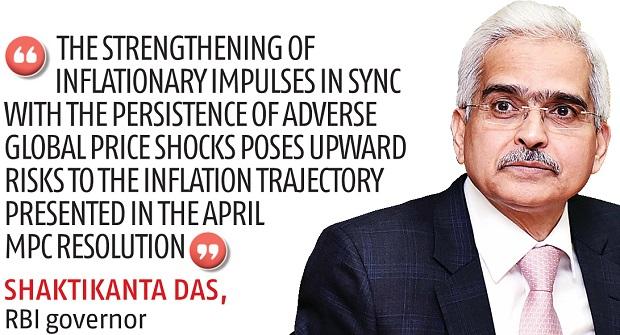 “…the decision of the MPC today to raise the policy repo rate by 40 bps to 4.40 per cent may be seen as a reversal of the rate action of May 22, 2020 in keeping with the announced stance of withdrawal of accommodation set out in April 2022,” Das said.

In the April policy, the MPC decided to tackle inflation as its priority following the Russian invasion of Ukraine, which sent commodity prices, including those of crude oil, shooting up.

“We believe the rate hike is a belated acknowledgement of the inflation risks and that policy has been behind the curve,” Nomura said in a note.

“The sharp flare-up of inflation in March, the outlook for its continued persistence in April and the risk of unanchored inflation expectations and second-round effects have led to an urgent policy pivot,” the report said.

Concern over failing to meet the inflation mandate would prompt the MPC to go for aggressive hikes, market participants said. Dinesh Khara, chairman, State Bank of India, said: “The front-loaded action by the RBI will go a long way in supporting the markets.”

Rahul Bajoria, managing director and chief India economist, Barclays, said: “The large inter-meeting hike from the RBI indicates that tackling inflation risks is now front and centre. We now expect the RBI to raise the policy rate by at least 50 bps in the June policy meeting, and see a near-term rate pause only around 5.15 per cent.”

The hike in the cash reserve ratio (CRR) is in line with the central bank’s objective to drain out excessive liquidity, which is around Rs 7 trillion. Banks do not earn any interest on keeping CRR money with the RBI. Bankers said the hike in the repo rate, which would increase lending rates, would more than compensate for the high CRR.