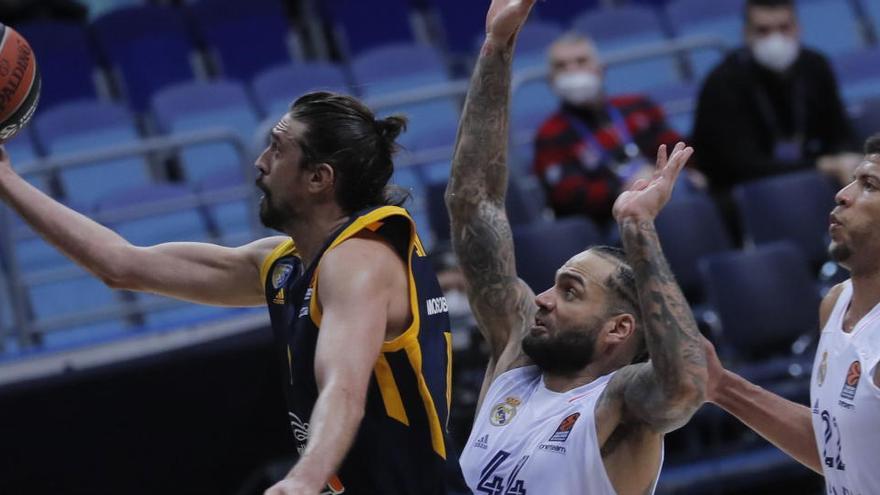 Real Madrid accused the casualties and fell on Tuesday to the bottom of the Euroleague, the Khimki (78-77), in a game in which the Whites were very uninspired in attack, especially in the first two quarters.

A score of losses are too many. Real Madrid woke up too late and he lacked energy in the final moments to clinch victory after turning the score around in the fourth quarter.

The 63 points from Shved, Mickey and McCollum they were too much for the white defense. In this way, the Russians broke a streak of 17 consecutive defeats and achieved their third victory of the season.

The Russian tour –Real Madrid will face Zenit on Thursday– He started with a defeat that can put the Spanish team in trouble, as several teams are on his heels for entering the top eight in the standings.

The game was marked by the scourge of casualties in the white team: Rudy, Llull, Randolph y Thompkins.

Forced by circumstances, Pablo Laso opted for a starting five made up of his favorite defensive trio, formed by Tavares, Garuba and Deck. However, Real Madrid did not hit the key either in attack or defense until the third quarter.

Tavares responded to confidence in the first minutes with a hook, an “aley-hoop” and two plugs, one of them to Mickey, who seemed very hooked from the initial jump against his old team.

The first quarter was very stuck. Whites had a hard time scoring –Causeur missed both of his triple attempts– while among the Russians the gunman Alexéi Shved was the only one who saw the opposite ring.

Alocen, who replaced a misguided Laprovittola, broke the drought from the line of three with a much needed triple.

Mickey woke up and stopped the visitors from leaving on the scoreboard. Real Madrid finished the fourth with an advantage, but without convincing anyone (17-18).

In the second quarter the russians got ahead (22-20) in the absence of Madrid offensive creativity. The revulsive was McCollum with three baskets, one of three. Shved joined him with two house-brand innings.

The failures of Real Madrid followed one another. Abalde missed two triples in the same possession. Laso was screaming on the bench. Khimki was already in command clearly after five minutes (33-24).

Laso’s pupils were a real gibberish in attack. In an attempt to awaken his own, Laso resorted to Felipe Reyes, who is about to turn 41 years old.

The entrance of the moral leader of the team seemed to turn the game around. Laprovittola scored from two and Carroll scored a running triple (33-29).

But it was a mirage. Turnovers kept killing Real Madrid. Garuba tried without luck to stop an inspired McCollum.

Carroll lost the ball, but after responded to triple Shved with another basket from beyond seven meters. Causeur was also finally intoned from a long distance.

Real Madrid saved the furniture, but at rest the scoreboard showed a dangerous 45-38.

Laprovittola got off to a good start in the third quarter with two triples and a two-pointer. Added to a basket under the ring of Tavares, Madrid approached on the scoreboard (51-48).

The Argentine guard stained his performance with two consecutive losses, but Causeur and Carroll fixed it from the line of three.

The game then became a give and take. Territorio Carroll. The American went into action with two stratospheric triples. Real Madrid leveled the score at the end of the third quarter (62-62).

The white team did not throw in the towel. A combination between Alocén and the Cape Verdean pivot put the white team ahead (62-64).

But Shved, Mickey and McCollum did not seem willing to miss the opportunity to break the embarrassing streak in the highest continental competition.

Madrid reached the last two minutes ahead (74-75). Deck’s legs didn’t shake and scored on a true bogey inning, but Shved had the last word and scored to the last hoop.

With 17 seconds left on the clock, Real Madrid was behind (78-77), but had the ball. Unfortunately, in the last possession Causeur lost the ball and the Russians were victorious.

Laso’s team will be able to compensate on Thursday against Zenit, a direct rival for a spot in the top eight.

Incidents: match corresponding to the twenty-seventh day of the basketball Euroleague played in the Mytischi pavilion before half a thousand spectators.