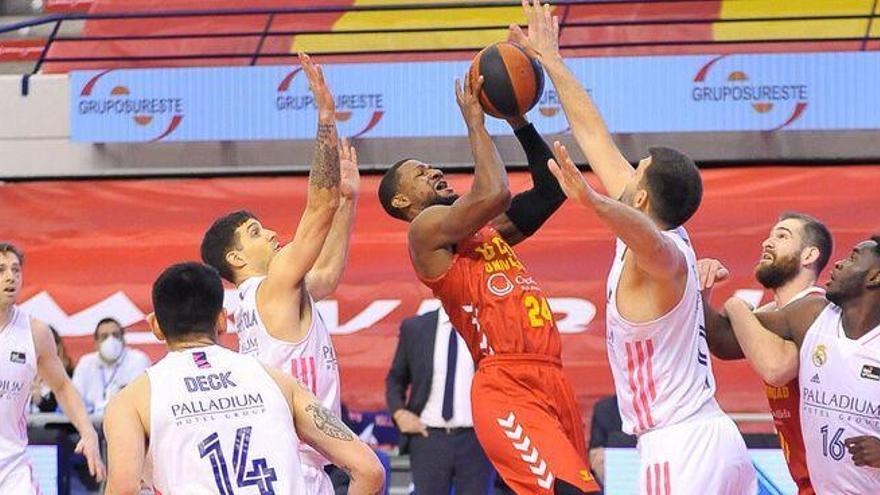 The Real Madrid, making a solid game in defense and without delicacies in attack, has settled with a clear win by 58-74 your visit to Murcia, with what remains firm in the leadership, now with 22 victories in 23 disputed parties, and chained its seventh consecutive triumph in the championship and the tenth against a rival that does not win to him for almost five years. The UCAM Basketball Club, for its part, chains seven setbacks in a row in the competition and relegation to the LEB Gold League is already a threat.

Two triples by Gabriel Deck and James Webb III were the first baskets of the match and from there a 0-7 run sent the team led by Pablo Laso (3-10) and forced Sito Alonso to ask for the first time-out with barely four minutes elapsed.

The maneuver served to stop the white attack but did not wake up the UCAM CB in the offensive aspect and the proof of this is that in those six minutes Madrid scored only two baskets, by Alex Tyus and Fabien Causeur, and the granas a triple converted by Emanuel Cate, the first of his career in the Endesa League. Thus, the first quarter ended with a minibasket scoreboard and ten rental points for the leader (6-16).

The Madrid stretched its advantage to 13 goals (12-25) with Felipe Reyes doing damage in the red zone and the youth squad Tristan Vukcevic on the track. However, the university team, based on defense and forcing turnovers from their opponent, got into the match with eight points in a row and without letting the opponent score any (20-25).

The break was reached with the open game and low figures (24-30), which in a way could suit UCAM, with less offensive potential than Madrid, no matter how much it faced the meeting with sensitive losses.

Cate, with nine points, led the local attack, while in Madrid the score was widely distributed with Walter Tavares, author of six, as the top scorer after two quarters.

After passing through the changing room the same trend was maintained in a match with constant interruptions and I play very stuck. Caio Pacheco, a young 22-year-old Brazilian international point guard who arrived this week at UCAM on loan from Argentine Weber Bahía, made his debut when the score was 30-37.

A 2 + 1 from Pacheco himself, who finished with six points and leaving good feelings, made it 40-42 in the 27th minute, but Jaycee Carroll, with two triples, came to the rescue of Madrid (40-48 just 60 seconds later) , although the white triumph was still in the air at the end of the third period (44-50).

Those of Laso, although they gave the feeling of not stepping on the gas, they weren’t willing to be surprised and a partial 0-5 start at the start of the last period gave them air (44-55).

Jordan Davis, with three baskets in a row, made the home team believe and they continued until there were five minutes to go (56-62), but until then, the 2-12 with which Madrid ended the clash also made him prevail with the maximum advantage achieved throughout it, a 58-74 that leaves no doubt of his superiority in the Palacio de los Deportes.

Incidents: Match corresponding to the twenty-fifth day of the Endesa Basketball League that was played behind closed doors at the Palacio de los Deportes in Murcia. EFE