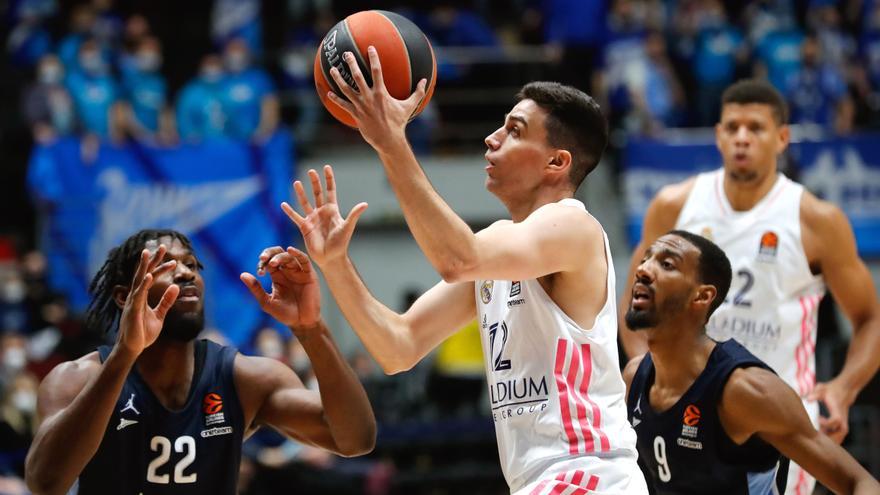 Never give up Real Madrid. After losing to the bottom, the white team today defeated a direct rival, the Zenit of Xavi Pascual (71-75), in a life or death match for qualification for the Euroleague playoffs.

Madrid learned their lesson from Tuesday against Khimki and came out very strong, but again went through a big bump in attack during the third quarter (29-14), in which the Russians turned the score around and made one fear the worst.

It was enough to start well and finish better. Tavares, a giant in the first half with 14 points, was charged with fouls, but returned in time to impose its law in both areas.

With this victory, Madrid takes a giant step forward in its aspirations to qualify for the top eight, as overtakes the Russian team with 17 victories, although this one has a pending party.

Pablo Laso’s team arrived very depleted by casualties and, at the same time, in great need after suffering a painful defeat on Tuesday against Khimki (88-87), who had seventeen consecutive defeats.

The technician did act of restraint and admitted that the game against the Russians was not acceptable, so today he introduced two changes in the starting five: Alocen replaced Laprovittola at the base position and Causeur gave the position to Taylor.

Zenit also could not count on the American either Rivers nor with the lithuanian Gudaitis.

Madrid came out plugged with a triple from Deck and two innings in the first minute and a half. After three minutes the whites already dominated the scoreboard. (6-12)

Alocen justified the confidence placed by Laso. He scored two baskets and led the team perfectly in static and fast transitions.

Meanwhile, Taylor chased Pangos like a shadow across the court. With (8-18) on the scoreboard after five minutes, Pascual was forced to call a time-out.

Compared to Tuesday, the first quarter was like night and day. (13-24) Tavares dominated the zone at will with ten points. And other good news. Thompkins came back.

Pangos tried to wake up his team at the beginning of the second quarter with two baskets, including a triple and a “alley-oop” which Black took advantage of. The Zenit dangerously reduced the distance. (22-29)

Garuba and Deck went into action, and Madrid endured the local arreón. Pascual tried to move the bench, but failed break the rhythm of Laso’s pupils.

Madrid went to the locker room with the game apparently under control despite a triple in the last second from Pangos, which finished with 14 points, the same as Tavares. (29-38)

The third quarter started with the same starting five that started the game, but the sensations were very different. Poythress dared to challenge Tavares, who appeared to come out cold.

In less than two minutes, the Russian team tied the score. (38-38) Pangos did not score, but Hollins and Thomas did from triple.

Start again. The Madrid returned to enter a dangerous bump in attack. Laso turned to Carroll as he did against Khimki, but to no avail.

Madrid could not score more than free throws. The worst thing is that Tavares received an incomprehensible personal fourth as soon as he jumped onto the field after a well-deserved rest.

Baron took the Pangos relay from line three. Two spectacular triples without Abalde being able to arrive on time.

The third quarter ended with Zenit already clearly ahead (52.58). Madrid was in trouble again.

Carroll was intoned in the last partial. His team needed him, but the advantage was barely dwindling. Laso could not let the Russians get away on the scoreboard and took out Tavares again.

If they wanted to win, Madrid needed to connect with the Cape Verdean, who had not scored since the break. Laprovittola replaced Alocén.

Deck scored on a baseline inning and Madrid tied (66-66), but Barón hammered again from the triple. The party was on the wire. Pangos, drowned out by Taylor, saw no hoop.

Laprovittola put his team ahead with two minutes to go. (69-70) Tavares put a monumental plug and then crushed the opposite ring.

With one minute to go, three points clear. Laso’s team’s pulse did not tremble and he won a soothing and crucial victory for his future in Europe. (71-75)

Now, Madrid will have to tie the males to receive at home the first two classified: Barcelona and CSKA Moscow.

Incidents: match corresponding to the twenty-eighth day of the basketball Euroleague played at the Sibur Arena in Saint Petersburg before more than three thousand spectators.