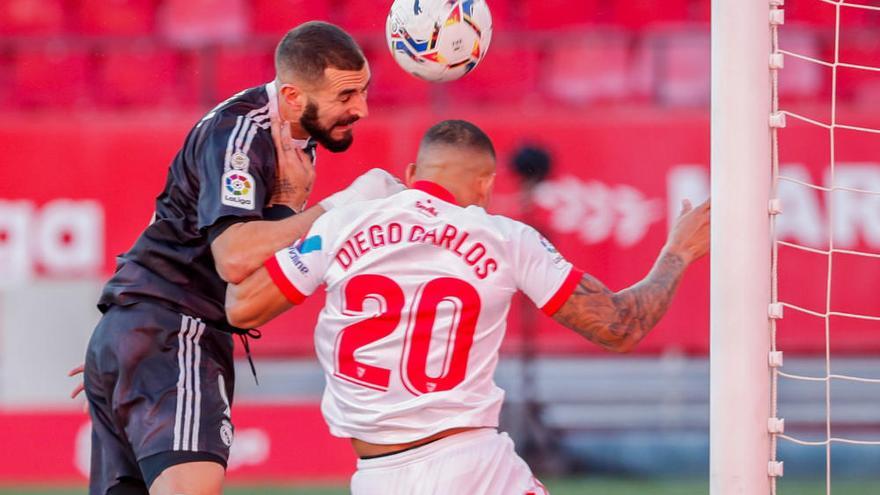 The real Madrid won 0-1 at Sevilla in a match in which the guy endured to resurface with an own goal from goalkeeper Bono, who rejected a shot from the Brazilian Vinicius without a goal, but it was enough to achieve the goal of victory and to “change the chip”, as requested by Zinedine Zidane, to settle his crisis for the moment and gain morale for him. decisive match of the Champions ante el ‘Gladbach’.

In a highly competitive crash, Madrid had to put on their overalls to change their bad dynamics of two defeats in a row (Alavés and Shakhtar) to gain morale for their decisive appointment against Borussia Monchengladbach, in which they play to go to the eighth of the Champions League, against an inferior Sevilla in the first half and whose reaction was not enough in the second.

In a duel of emergencies, of needs, in an empty Sánchez-Pizjuán for the sake of the pandemic and, therefore, without the classic atmosphere of all Seville-Real Madrid, both teams were urged to win and change the bad image of their defeats in the Champions League, against the Ukrainian Shakhtar (2-0) the meringues and against Chelsea (0-4) the Andalusians.

With losses in both teams (Ramos, Mariano, Jovic, Carvajal, Valverde and Hazard in those of Zidane; and Vaclík, Escudero and Acuña in Julen Lopetegui’s team), Real Madrid had a brilliant start and completely controlled the game, but with little prize.

The madridistas, very concentrated, with claws for being injured in their pride and with a very high pressure, they took full control from the start and enjoyed clear chances, although they lacked effectiveness to transfer their clear superiority to the scoreboard.

Madrid already warned at 55 seconds, in a crossed shot by Vinicius that touched the goal, which increased the nervousness of goal Bono, who reappeared after overcoming COVID-19 and was about to cause the 0-1 at 5 minutes in a failure with the foot that the incisor Vinicius fought, although they thwarted the danger between the Moroccan and Diego Carlos.

He continued very firm Zidane’s team, total dominator of the midfield and dangerous on the wings, but the German Toni Kroos did not hit a miracle in a shot that was narrowly deflected in 21 or Benzema with a thread to which Bono replied with a save in 38.

In the resumption the script changed. Sevilla reacted, went up and got a Real Madrid in trouble, which went down physically, tired by his last demanding commitments, although he held up well the onslaught of a much more vertical, bossy and protagonist group from Seville, although he did not succeed in his approaches.

The Dutchman Luuk de Jong from Chile tried it, passing Navas, in 52, but Courtois resolved without problems, and in some isolated action from Ocampos, until the wet powder that the meringues had previously had became 0- 1, Bono’s own goal, after the maneuver of the omnipresent Vinicius, in the 55th minute, by deflecting just enough a ball from the right of Mendy, which touched the goalkeeper to sneak into the back of the net.

From there, and with Lopetegui’s offensive changes to seek more depth with Óliver Torres, Gudelj, Suso, En-Nesyri and Idrissi, Sevilla took over the game, but lacked clarity to draw against a very solid Madrid, concentrated and hard-working, who neutralized all the desperate attempts of the Andalusians.

Those of Nervión had their options, with a shot from Suso, a free kick from Gudelj that narrowly missed, another from Cádiz, on his reappearance after his injury, and a Chilean from Ocampos that Courtois neutralized.

His attempts, however, were in vain against a very serious Real Madrid, who defended well when it was worst, in the second half, and who endured to change their dynamics with a valuable victory.

Incidents: Match of the twelfth day of LaLiga Santander, played behind closed doors at the Ramón Sánchez-Pizjuán.