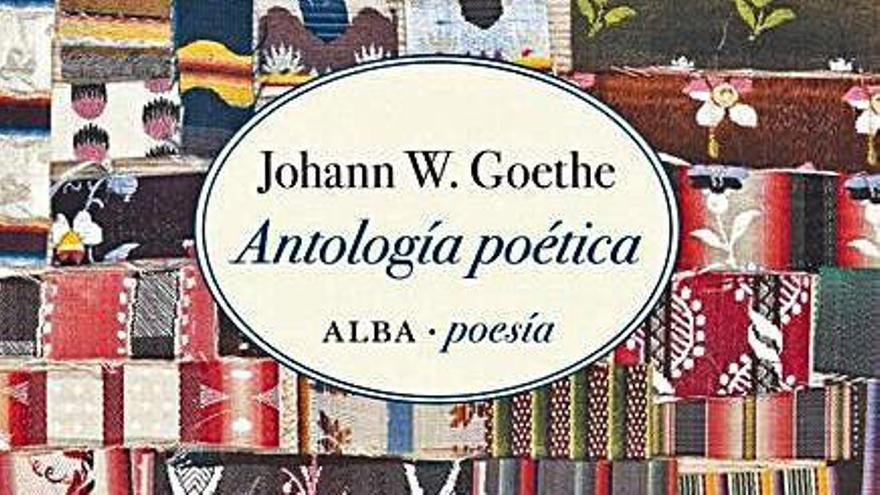 The Coen brothers filmed Fargo 25 years ago. A false realism that caught both moviegoers and the general public. Almost two centuries earlier, Johann Wolfgang von Goethe (Frankfurt, 1749 – Weimar, 1832) published Poetry and Truth (1811-1830, Alba Clásica Maior no, III; Alba Minus, number 61), an autobiography that took twenty years to complete, which has remained as an essential testament to one of the most brilliant moments of Central European culture. In the last part it includes the concept of the demonic and chaos, to enter the depths of romanticism. Ethan and Joel Coen have been considered as the homers of postmodernity, without going into exaggeration, they have skipped Goethe, a benchmark of German classicism that gives way to that Romanticism that will point the way to modernity.

Goethe’s Poetic Anthology (Alba Poesía, No. 11), with a translation by Xandru Fernández, is definitive in order to get closer to the forerunner of the Coen cinema and of many other mainstream contemporary cultures. Fernández in his double facet of anthologist and interpreter warns in the introduction that his work offers an image of Goethe’s poetry in which the poet who was, who is and who can become for a reader is recognized neither contemporary nor scholar.

If you want in its purity to enjoy the delights of love, / remove insolence and severity from your heart. / The first wants to chase Cupid away and the second to arrest him. / Opposing both smiles mischievous god. The number 83 of Venetian Epigrams written in 1790 in the city of love after his second trip to Italy maintains an incontestable topicality, since the poet meets a dirty and suffocating Venice that is a trap for tourists.

Fernández divides Goethe’s Poetic Anthology into five sections. Ballads, songs and other poems is the first, where the famous Mignon is collected, which stimulated the creativity of many composers of his time. Goethe puts in the mouth of the girl Mignon -Kennst du das Land, wo die Zitronen blühn?… (Do you know the country where the lemon trees bloom?…) -, a poem that appears in his novel The Years of Learning of Wilhelm Meister and that it is one of the most exciting poetic narratives in literature. Mignon, a young Italian woman with an androgynous appearance, is kidnapped by homeless men and taken to Germany, where she will be forced to sing and dance in a traveling variety company. From loneliness and melancholy, Mignon longs for her country and sings the fantasy of its landscapes. A poem to which Beethoven, Schubert and Schuman, among others, put music.

The Roman Elegies form the second part – How happy we were in those times; we are now again thanks to you. The aforementioned Venetian Epigrams make up the third part of the anthology, which leads to Diván de Oriente y Occidente, twelve books published between 1819 and 1827 inspired by Persian poetry such as Phenomenon, when on the way to Frankfurt he sees a white rainbow, without colored stripes and interprets it as a harbinger of rejuvenation.

The songs of Wilhem Meister’s Learning Years close the book, where the poet moves towards self-realization. Verses inspired by his second novel that had a definitive impact on European culture, where Goethe puts the eponymous hero at the escape from his decadent life as a bourgeois businessman.

Ambroise Thomas’s opera Mignon is based on Wilhelm Meister’s Learning Years, just as Wim Wenders’ film The Wrong Move is a free adaptation of his tale. The last verses of Poetic Anthology (Without regrets or efforts I have lived / but a deep pain I still feel. / With regret I grow old before my time; / make me be young again forever), leave evidence of the freshness of Goethe’s poetry , long before movies and series.