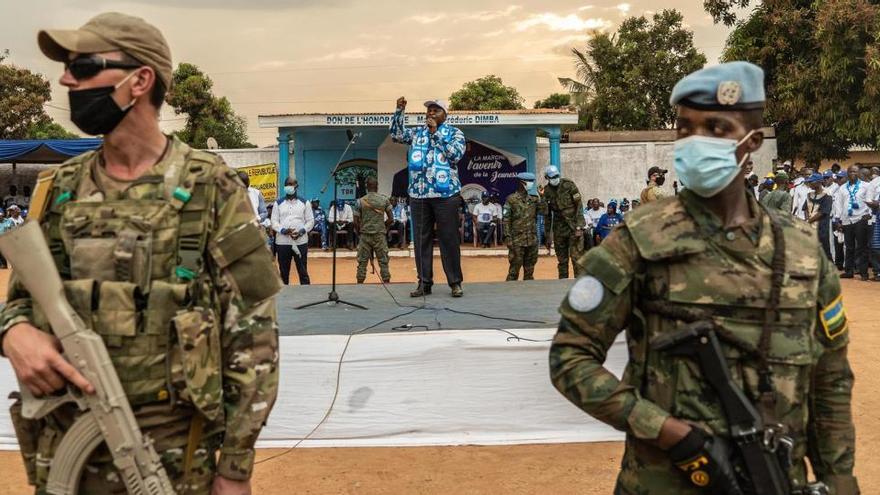 The Rebel armed groups have attacked and taken control of a city in the southeastern Central African Republic, Bangassou, near the border with the Democratic Republic of the Congo, which has forced thousands of civilians to flee to the neighboring country, while the country’s Public Prosecutor’s Office has opened an investigation against former President François Bozizé for “the developing rebellion” .

According to information from the NGO Doctors Without Borders (MSF), on Sunday, January 3, the coalition of rebel armed groups seized Bangassou and, after the attack, had to provide emergency care to twelve people.

In the last two weeks, and after the escalation of tensions in the African country linked to the electoral process, MSF has had to assist 110 people in Bossangoa, Bangui, Bangassou, Bambari and Batangafo.

MSF also regrets that the deterioration of security complicates the already extremely restricted access of thousands of Central Africans to essential medical care in “a country in chronic health crisis”, they expressed this Monday through their account of Twitter.

Thus, it has called on all armed actors to fulfill their obligations to protect civilians and humanitarian workers, as well as to respect medical structures, ambulances and patients.

On December 27, 2020 the elections took place in RCA although they were in doubt until the last moment by the offensive launched by a rebel coalition to force the president, Faustin-Archange Touadéra, to give his arm to twist and the appeals presented before the Constitutional Court by the opposition.

The president rejected all requests to postpone the elections and insisted on the need to keep the date set.

Tensions have drastically spiked as a result of the December 3 decision of the Constitutional Court to reject the candidacy of former President François Bozizé, who returned to the country at the end of 2019 to run again as a candidate for the Presidency, a position he left in 2014 before the uprising of the Séléka rebels, predominantly Muslim.

Immediately after the Constitutional decision, information emerged about meetings held by Bozizé with various armed groups, including former members of Séléka and the ‘anti balaka’ – a Christian-majority militia that emerged in response to the abuses of Séléka members- – which led the Central African authorities to accuse him of try to foment a coup.

Days after the alleged meetings between Bozizé and the rebels, the Coalition of Patriots for Change (CPC), which brings together six armed groups –including former Séléka and ‘anti balaka’ – came to light and charged hard against Touadéra for the electoral preparations and demanded that they be postponed.

This Monday, the country’s electoral commission announced the preliminary electoral results of the presidential elections, which will not be known in firm until January 19, which would give Touadéra a second presidential term with 53.9 percent of the votes, according to has reported the agency Bloomberg.

The electoral body has also provided data on the voting day, ensuring that there was a 76.3 percent turnout, although in two areas the right to vote could not be exercised due to the activity of the rebels.

The Prosecutor’s Office opens an investigation to Bozizé

For its part, the Central African Prosecutor’s Office has opened an investigation against former President François Bozizé for what it has described as “a developing rebellion” against the State.

In this sense, he accuses Bozizé of supporting “the rebellion created under the name of the Coalition of Patriots for Change (CPC)”, despite the fact that the former president has repeatedly denied his connection with the rebels.

The Attorney General, Laurent Lengandet, has also announced that several rebels have been arrested and they will be prosecuted for violating internal security, while they are also charged with criminal association, rebellion, murder, aggravated robbery and conspiracy.

According to Lengandet, “to date, eight of these insurgents have already been brought before the examining magistrate, who has regularly placed them under arrest.”

Also this Monday, the United Nations One-Dimensional Integrated Mission for Stabilization in the Central African Republic (MINUSCA) has asked the Central African authorities to bring to justice “those responsible and sponsors of the violence that has claimed the lives of civilians, humanitarian workers, security forces, national defense and peacekeepers. ”

Likewise, the UN, together with the European Union, the African Union (AU) and the Economic Community of Central African States (CEEAC), has issued a statement condemning the violations of the Political Peace and Reconciliation Agreement in the Central African Republic and They urge a cessation of hostilities.