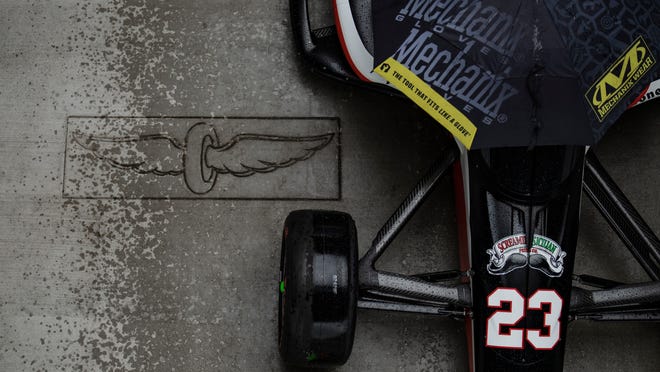 INDIANAPOLIS — During an Indianapolis 500 Day 1 of qualifying where 20 cars or more came in with a legitimate shot at making Sunday’s Fast 12, Chip Ganassi Racing placed all five of their Hondas into the second round.

And yet in a day full of storm watching, record-setting laps, odd penalties, rain and restarts, CGR’s achievement was hardly a blip on the radar. Saturday’s qualifying action, which started early (to get ahead of forecasted storms) and ended early (yellow-flagged for lightning at 4 p.m.), was pressure-packed with storylines from the top speeds to the driver who didn’t turn a single qualifying lap but still qualified for the race.

Let’s break it down.

The fastest speeds in 26 years

Saturday began with Ed Carpenter, Scott Dixon and Jimmie Johnson becoming the 8th, 13th and 14th-fastest drivers in Indy 500 practice history from their laps in the pre-qualifying warmup, and that record book-rewriting continued into the opening runs of qualifying. A pair of IndyCar’s youngest stars, Pato O’Ward and Rinus VeeKay, went off first and second, respectively, to kick off qualifying, and not only did they go untouched, but few have ever run faster.

More:Ed Carpenter on Indy 500 practice: “We did a little bit of everything”

Indy 500 qualifying 2022: Here are the top 12 at Indianapolis Motor Speedway

VeeKay, who last year became the youngest front-row starter in the race’s history, leapfrogged O’Ward (233.655 mph vs. 233.037 mph) after taking the track second and held onto the provisional top-spot for the remainder of the day. The Ed Carpenter Racing driver’s four-lap average ranks third-fastest among official qualifying runs in the race’s history, behind only Arie Luyendyk (236.986 mph) and Scott Brayton (233.718 mph) — both set in 1996.

O’Ward’s slots in 5th-best, additionally behind Tony Stewart’s 233.100 mph run from ’96. His teammate, Felix Rosenqvist, who was the fourth driver to roll off pitlane Saturday morning, logged a four-lap average of 232.775 mph, 7th all-time, with Alex Palou one-thousandth-of-a-second behind in 8th (232.774 mph). IndyCar veteran Tony Kanaan managed to throw down a run of 232.625 mph, good enough for 10th-best all-time.

After pacing the previous three days of practice, Takuma Sato delivered a frustrating initial run of 232.196 mph, slotting him 6th among the nine drivers that had gone off at that point. But his impact on the day’s action had only begun. Marco Andretti, beginning his warm up for his initial qualifying attempt, came upon Sato’s No. 51 in the middle of the backstretch on his cooldown lap, instead of running in the warmup lane as drivers are directed.

Though Marco was yet to start his run, he had to slam on the brakes in order to swerve and avoid the Dale Coyne Racing car. After Andretti stepped out, he said the maneuver had significantly impeded the lead-in to his run. Andretti Autosport went on to file a petition to IndyCar race control asking for Sato to be penalized and for Andretti to be given another attempt before the field’s first runs were completed. Ultimately, the series, opted to toss out Sato’s attempt, though Andretti was given no priority to turn a new qualifying run.

Coincidentally, the pair went back out in succession — 4th (Sato) and 5th (Andretti) — after the first round of qualifying runs were completed. Sato managed to slide into 12th and hold on to make Sunday’s Fast 12 field. Andretti re-do slotted him 23rd for the 500.

Missing out the first time around

After the initial round of qualifying runs, only 29 cars had managed to record four-lap runs to slot them into the field. Outside Sato’s penalty, those other three cars had missed out for a variety of reasons:

>>During Saturday’s early-morning practice, Stefan Wilson’s No. 25 Chevy crew had improperly set up his gearing, reversing 2nd and 3rd, meaning that when he attempted to shift from 3rd to 4th, his car dropped down to 2nd, over-revving his car well past the 12,000 rpm limit up to 16,000 rpms. Out of precaution, his team began changing out his engine following practice, and in doing so, missed his initial qualifying run of 17th in the order. His team was unable to get the car back out before the day was called, meaning he’ll start 33rd May 29.

>>Juan Pablo Montoya’s No. 6 Chevy failed its pre-qualifying technical inspection, meaning the Arrow McLaren SP driver was forced to give up his spot of rolling off ninth in line. The two-time winner was the first to roll off after initial runs were complete, and it initially slotted him 26th, but he eventually fell to 30th by the time others’ second runs were made.

>>Colton Herta rolled off the grid with the hopes of improving upon his 2nd-place start a year ago, but moments after, his engine began sputtering. His No. 26 Honda crew called him back into the pits. His car required an engine change, and he managed to get into the Fast Lane and made the seventh extra run of the day. His four laps set him 25th for the 500.

Trying to take a leap

Juncos Hollinger Racing’s Callum Ilott was the first driver that had previously set a time to make a second qualifying run Saturday afternoon, and the Indy 500 rookie managed to jump two spots from 22nd to 20th. Fellow rookie David Malukas followed, and for a moment, the Dale Coyne Racing driver thought he had worked his way into the Fast 12 in a jump from 17th to 12th.

But the next driver in line, Malukas’ teammate Sato, knocked Malukas down a peg to 13th, which is where the Indy Lights rookie finished up. After Andretti rolled off and jumped from 28th to 23rd, defending 500 winner Helio Castroneves tried to send a spark through his No. 06 program that started the day sitting 29th. The four-time winner made a minor improvement, jumping up to 26th but fell to 27th by the end of the day.

Following Herta’s run, Alexander Rossi became the first driver to take a major risk running in the Fast Lane. Having initially qualified 15th, Rossi had fallen to 17th by the time he rolled off pitlane, but in using the Fast Lane, his No. 27 squad opted to give up his position and risk falling down the grid in order to jump to the front of the line.

Ultimately, the risk didn’t pay off. Rossi slid down to 21st just before the storms arrived in Speedway.

With Sage Karam on-track moments after Rossi completed his run, lighting struck within an 8-mile radius of IMS, forcing a 30-minute hold on qualifying starting at 2:13 p.m. With additional rain that forced track workers to dry the surface, running wasn’t restarted until just after 3:50 p.m. Even though he started from the Fast Lane and agreed to surrender his previous time, Karam would have been given back his 26th spot on the grid if running had not restarted.

But because a small weather window emerged, the Dreyer and Reinbold Racing driver was able to succeed in sliding up the grid three spots to 23rd. Scott McLaughlin, next in line in the Fast Lane when Karam’s 2nd run was initially called off, had no such luck.

The Team Penske driver sat 13th after the first round of runs but had slid back further to 15th via Malukas and Sato’s second runs. To try and jump into Sunday’s Fast 12, his No. 3 crew elected to surrender his original run to get him on-track quicker. Instead of Karam’s 0.5 mph jump in four-lap average speed, McLaughlin’s fell nearly 1.5 mph, and he lost 11 spots on the grid and will start 26th.

While his teammate Josef Newgarden was on-track hoping that same bad luck wouldn’t befall him, race control detected another lightning strike in the area, and they threw a yellow flag at 4 p.m. that eventually turned into the end of the day.

Even without Stefan Wilson turning an official qualifying run, Saturday’s results were deemed official because he was at least given a chance to make a run — one his team was forced to pass on while swapping his engine. With Dalton Kellett’s completed run at 1:25 p.m., we were guaranteed to end Saturday with positions 13-33 set.

More: IndyCar drivers preparing for chaotic 500 qualifying: ‘The fans are the winners’

With a new twist this year, IndyCar will use both a Fast 12 and Fast 6, instead of the typical Fast 9, to finish slotting the grid. Sunday’s on-track action will begin with a 90-minute practice open for the 12 cars still alive for the pole. Starting at 4 p.m., those cars will roll off in reverse order of Saturday speeds. The top-6 four-lap runs from that pool will then run once more after a two-lap cooldown period behind a pace car. The fastest driver from that third and final run will start the 106th running of the Indy 500 on pole.