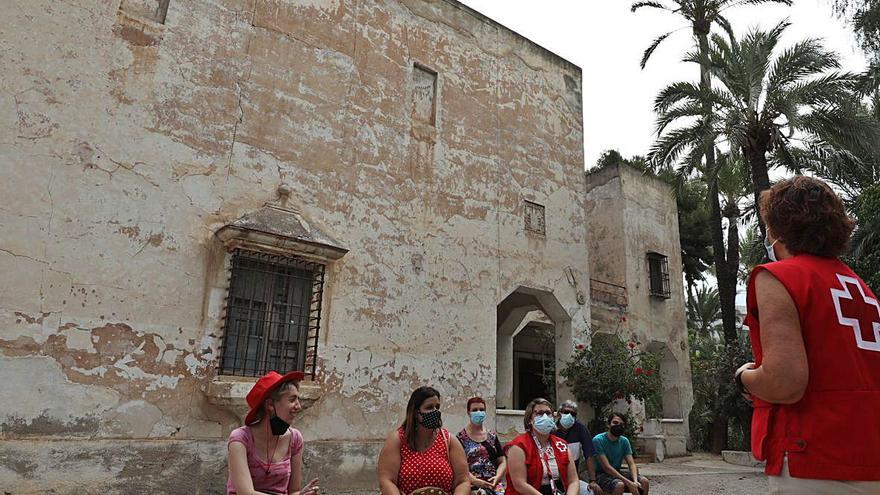 A few days ago, representatives of the humanitarian organization at the national, provincial and local level met with the government team to present the project in search of municipal collaboration. The aim is to value the environment for the next few years, so that the century-old house does not continue to deteriorate and achieve some function other than that of a warehouse as it has been up to now.

Antonio Ramón Guilabert, Red Cross delegate in Elche, points out that this project seeks to make the space a benchmark for humanitarian activity because conference rooms will be set up where Red Cross professionals who have been on the front line in some international conflicts in countries like Syria or Eritrea.

Similarly, the facilities would have an informative tint so that experts can talk about the environmental crisis and environmental studies can be carried out on the Vinalopó river. The approach to social exclusion derived from the coronavirus pandemic would also be another of the lines in which it could be deepened.

The neo-Arab style house has 300 square meters spread over two floors and the recovery project has started because an urgent restoration of the facade is necessary to end the problems of leaks.

In 1952 the organization acquired the building and the architect Serrano Peral reformed it and part of the house was preserved, such as the kitchen, toilet, living room or archive. To date, no other major investment has been made in the area. As for the architecture, the roof responds to the typical houses of the Camp d’Elx but the plaster shields, the bars on the windows and various ceramic touches make the difference, according to some experts.

One of the plans is to convert the space that served as the home of the First Lieutenant of the Red Cross into offices and archives, so they understand that collaboration with the municipal archive or with the Miguel Hernández University could be interesting to catalog old documents.

Thus, returning the house to its origin is a way of paying homage to its original owner, the Granada-born painter José María López Mezquita, who was born at the end of the 19th century and received the Gold medal at the National Exhibition of Fine Arts in 1901. Arts. According to some documentations, he traveled through Europe visiting and studying museums with the help of the Infanta Isabel de Borbón. He was a member of various academies, the most recognized being the Hispanic Society of America in 1926. He would amass a great fortune selling his works that would lead him to buy two studios in Spain, one of them in Elche. In the city barely a year passed before the civil war and at that time he met the researcher Pere Ibarra and painted some works inspired by the historic orchards of the city.

Guilabert notes that the painter did not have a recognizable connection with Elche and has found his works in the Thyssen museum. Investigating further it has been known that this painter went to New York because he was hired to continue the artistic line of Joaquín Sorolla when he died, according to the representative of the Red Cross. In addition, the Hispanic Society safeguards a collection of 38 Mosque paintings, including three about Elche. For this reason, the humanitarian institution wants to dedicate a space to the painter within the building as a museum and they are managing the temporary transfer of part of his work for an exhibition.

The idea is that in 2023 all these projects can see the light to take advantage of the 150th anniversary of the Red Cross in the province “and whatever it costs we are going to do it because that building is emblematic for the Red Cross nationwide”, highlights Guilabert .

This building was acquired by the humanitarian movement in the 1950s and now it is planned to also enhance the garden so that it has an attractiveness and outdoor activities can be carried out following the lines established by the Palm Grove Law. As they point out, the annual cost of maintaining the garden is 25,000 euros.