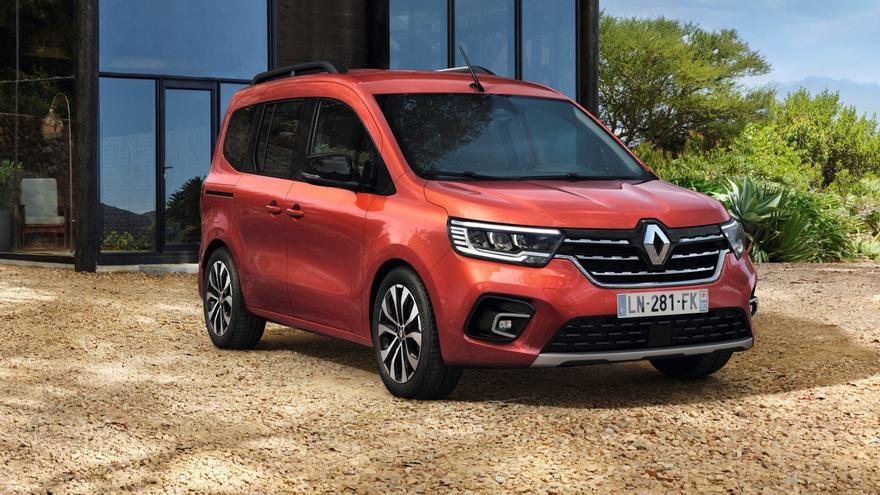 Renault launch the new Kangoo Combi, that is, the passenger version of the commercial vehicle that debuted in 1997, and that generation after generation has achieved extraordinary sales successes to become a benchmark in its segment.

The new Kangoo Combi responds to all families needs, with an incomparable versatility and modularity, thanks to which it is capable of providing a large space for five occupants or an outstanding load capacity. Also, with a new style exterior design, more comfort and more equipment, it offers a general quality worthy of a high-end private vehicle, together with cutting edge technologies.

If we were to define Kangoo Combi 2021 we would highlight these five characteristics:

The first thing that catches the attention of new Kangoo new KangooCombi is your sporty look, an unusual feature in this type of vehicle. The ribbed horizontal hood, a vertical front and ones very marked shoulders, give it great visual dynamism.

The front end sports Renault’s visual identity with the light signature in the shape of a C (C-Shape) and a handlebar grille with chrome beading and gloss black inserts. The rear also picks up the C-shaped light signature. The now wider tracks give it stability and robustness.

Sideways show a groundbreaking style, with marked shoulders, thus distinguishing itself within its category. These sculpted shoulders they break the cubic format typical of the van variants and bring you closer to the universe of the private vehicle. But there is also room for elegance. The new Kangoo Combi integrates the side windows and looks glossy black inserts, which bring harmony to the design and reinforce the appearance of a large continuous glass opening. New Kangoo Combi brings refinement down to the smallest detail, with numerous chrome or body-color painted parts (bumpers, door handles, sliding door rail guards) or high-gloss black mirror caps, adding to the elegance , as well as their 17-inch Vereste diamond aluminum wheels.

New Kangoo Combi is equipped with the led technology for the front and rear lights from the first trim level. The lighting Full LED allows to increase visibility 130 m in depth and 37 m in width. The fog lights also have LED technology and increase visibility in unfavorable traffic conditions (fog, rain …). They also incorporate the function «curve lights»To illuminate the inside of a curve, providing more safety and comfort and facilitating maneuvers at night.

The sophistication of the exterior moves a interior featuring an innovative brushed dark wood dashboard, a comfortable cabin and improved ergonomics in the driving position. New Kangoo goes to the higher range and offers more refined materials and more precise settings.

The adjustable steering wheel in height it is now too in deep, Meanwhile he seat driver now has the lumbar adjustment, which provides more comfort on long journeys. It should also be noted that they can now have a heating system.

Another element that affects driving ergonomics is the instrument panel, which is proposed in two different formats: the first with 4.2 inch digital color display and the second, available at the end of 2021, with digital color display customizable 7 inch. The latter allows customizing the digital display of the main speed and rev counter information. It has different displays depending on the mode that is selected, normal or eco.

One aspect in which a lot of work has also been done has been in the cabin soundproofing of the new Kangoo Combi, to offer the impression that it is going on board a premium model.

But if this model stands out for something, it is because of its unmatched versatility. It has a 2 / 3-1 / 3 folding bench and its folding front passenger seat, which are effortlessly manipulated to obtain a totally flat floor. Gain 15% additional space and ranks in the top 3 of commercial vehicles for its space. With its novel roof bars, New Kangoo distinguishes itself on the market by offering practical and aesthetic additional transport.

This system makes it possible to go from a longitudinal position to a transverse position without tools and without effort. It is enough to unhook them and without creating noise nuisances, they can carry a maximum load of 80 kg.

For even more practical use, the new Kangoo Combi is endowed with electric rear windows and the cabin has a rubber coating to withstand all kinds of situations (available as an option). The model is also ideal for family use and is equipped with the Isofix system in the two outer seats in the second row, as well as in the front passenger seat.

The engineers of this model have thought of all the details, including the comfort when accessing the cabin. To enter the front seats, it has a 90 ° door opening, while the rear bench is accessed through its 615 mm wide sliding side doors. The second row has the best habitability in the category, thanks to its three authentic adult seats (or child seats): 1.48 m shoulder width, 20 cm knee radius and 1.04 m indoor height.

New Kangoo Combi retains its rear bench, which can be folded on a flat floor, and, in addition, the front passenger seat can also be folded down to offer 2.7 m useful length on the floor.

In configuration 5 seats, the Kangoo Combi has a volume of trunk from 775 liters, which goes up to 3,500 liters with the bench folded down and the front passenger seat folded. Its rear tray can be placed along the backrest of the second row, thus allowing a load up to the ceiling, and it has a securing net that secures it for greater occupant safety. Loading length is 1.03m behind the bench, 1.88 m with the bench folded down and 2.70m with the front passenger seat folded.

In addition, this vehicle offers practical storage spaces accessible at the front with a capacity of 40 liters:

But despite its functionality, the Kangoo Combi couldn’t be further from an austere commercial vehicle, as its great technological endowment. It has a multitude of systems that allows its occupants to remain connected to the outside world during their journeys. The model integrates a wireless charger, as well as the new Renault EASY LINK multimedia system with smartphone replication and connected navigation in one 8 inch screen.

And of course, also enjoy the safety elements and driving aid more pointers on the market to offer the best protection to users.

All the engines from Kangoo Combi 2021 sonsumamente eficientes meet the requirements of the norma Euro 6D Full.

In gasoline is available with the motors:

The EDC dual-clutch automatic transmission, available soon, improves comfort and reactivity with a clear and fast response when changing any of the 7 ratios.

It should be noted that the maintenance of the motors is carried out at a interval of 30,000 km the every two years (the first of the two terms that is reached and according to the type of driver’s taxiing).

Finally, Renault has announced that in 2022, the range of the new Kangoo Combi will be expanded with a 100% electric version.