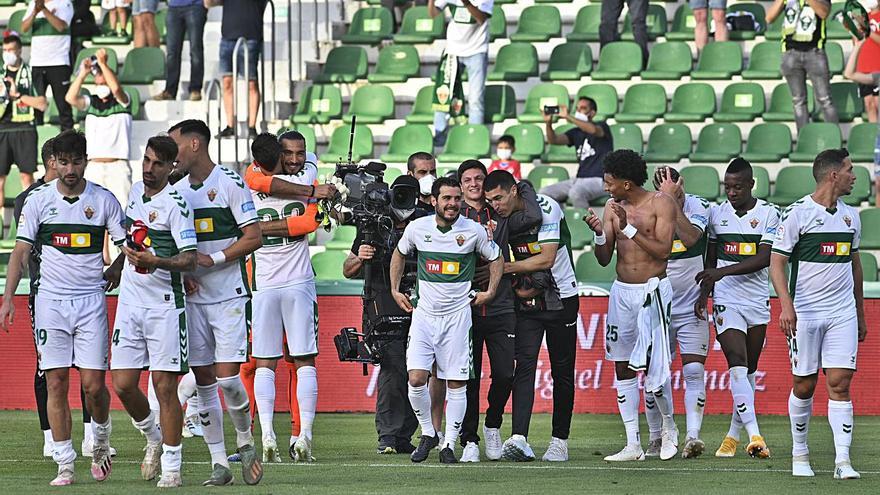 The first step is the continuity of Fran Escribá. The Valencian coach will have a lot of decision-making power for the configuration of the new team. The intention of the Elche entity is to carry out an important renovation, but not a total revolution with the change of most of the players, as has happened this season with the arrival of up to 17 signings. The objective is to maintain a base with the components of this campaign and to take a quality leap with eight or ten signings.

Most of the players in the current team have a contract in force, although some could be loaned out. Only seven players (Gazzaniga, Barragán, Dani Calvo, Mojica, Mfulu, Víctor and Nino) from this season’s squad end their relationship with the Elche club.

Two of them, Gazzaniga and Mojica, are on loan from Tottenham and Girona, respectively. The performance of the Argentine goalkeeper and the Colombian left-back have been good and, if Escribá continues as coach, as it seems, and decides that he wants to count on them; the club would try to keep them going. In the case of Gazzaniga it would not be difficult because he only has one year left on his contract with the English team. But with the Colombian it would depend on whether Girona ascends to First Division or not.

In goal, Edgar Badia has a contract until 2022. Despite his great performance, Escribá has opted for Gazzaniga in the final stretch of the League. With the Valencian coach on the bench it would be difficult to start, whether Gazzaniga stays or not. The Catalan goalkeeper has a good poster and, although his clause is eight million euros, if a good offer arrives, Bragarnik will surely consider selling it.

On the sides is where more changes are expected. Helibelton Palacios and Cifu signed until 2022. The intention is to bring a level right back and between the Colombian and Barragán one could stay. Cifu will almost certainly come out on loan.

On the left side, something similar happens. You have to bring one yes or yes and in the event that Mojica continues, the position would be covered.

For the central position, Gonzalo Verdú and Diego González also have ties until 2022 and it seems that they will continue, although the intention is to sign two central hierarchy and experience in the First Division. For this reason, Dani Calvo is quite difficult for him to renew.

In the defensive pivot, Mfulu ends contract and will not continue. Iván Marcone, with ties until 2023, after paying the purchase option of five million dollars to Boca Juniors, will continue, unless a good offer arrives from Argentina. Luismi, who signed for two seasons, has barely counted this season and also aims to go on loan or terminate his contract. If Marcone stays, the intention is to sign another defensive pivot.

The organizing position has been one of the main deficits this season. Raúl Guti has complied with note and is justifying the payment of five million to Zaragoza for his signing. Signed until 2025 and will once again be a cornerstone of the next campaign’s project. But the young Aragonese player has not had a change. Victor has barely played, his contract ends and he will not renew either. The club has in mind to sign a level midfielder to accompany Guti.

Rigoni if ​​he goes to Sao Paulo

For the bands, there are four players with a current contract: Josan, Fidel, Piatti, until 2022; and Tete Morente, who signed until 2024 after paying Malaga 500,000 euros for her freedom letter. Rigoni announced yesterday that Elche has sold it to Sao Paulo in Brazil. The Argentine had difficult to continue, because his performance has not been as expected.

In principle, reinforcing that position is not the main priority, although a player could arrive if a good market possibility arises. In that case, Tete Morente, who had a good start to the League, but who has not counted for Escribá in the last League games; he would be the main candidate to go out on loan. Fidel, Josan and Piatti, except for surprise, will continue.

For the attack, the French-green entity made official last week that it had exercised, with the payment of two million euros, the purchase option that it had with Torino on Lucas Boyé, which becomes the property of the Elche club. The Argentine will once again be one of the references up front next season. Guido Carrillo also has a contract and it is expected that injuries will allow him to perform as he has not been able to do this season. Pere Milla is another of those who will follow. Elche’s goal is to try to sign a good striker who can make a difference.

And then there is the question of Nino. Bragarnik said he will remain linked to the club if he decides to retire. The legend has not announced his decision yet, but he is getting closer to hanging up his boots. A meeting with the owner of the club is pending, because sportingly this year he has barely played and it seems difficult for him to be part of the next project. In any case, your case will be treated in a special way, as Nino deserves.