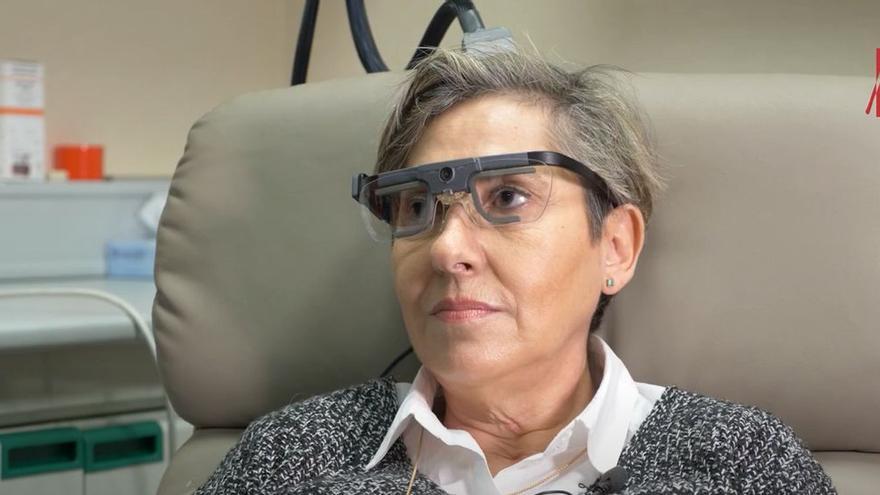 In December 2020, this same team of researchers succeeded in carrying out an experiment similar to the one for the first time. stimulate the visual cortex of primates. In that case, an implant with more than a thousand electrodes was used that allowed the animals to perceive shapes, movement and letters. However, the animals were not blind.

“This work goes a little further. We have implanted [los micro electrodos] in the brain of a completely blind person for more than 16 years ”, declares the UMH professor and member of the Center for Biomedical Research Network for Bioengineering, Biomaterials and Nanomedicine. The volunteer, a 57-year-old woman, has been able to perceive letters and identify the silhouette of some objects.

This is the first time such a brain implant has been performed in a blind person And, as Professor Eduardo Fernández explains, the results are very encouraging for the development of a visual neuroprosthesis that can help blind people or people with low residual vision to improve their mobility, and even in a more ambitious way to perceive the environment that surrounds them and orient themselves in it. However, the UMH researcher adds that, although the results of this and other studies are very promising, there are still many problems to be solved and therefore it is very important to advance little by little and not create false expectations, since at the moment this is just an ongoing investigation.

Over six months, the researchers conducted various experiments in which the volunteer had to try to recognize letters, the position of stimuli, the shape of different objects. These were repeated several times to observe the learning of the person’s visual cortex and observe possible changes.

The implanted device is a small three-dimensional array of 100 micro electrodes to communicate with brain cells in a bidirectional way: it allows both the recording of electrical signals and stimulation of the brain. It’s about a very small device, of only 4 millimeters of side, with electrodes of 1.5 millimeters in length. One of the conclusions of the study is that it does not affect the function of the cerebral cortex or that of the neurons that are close to the implant.

The UMH researcher explains that the results of this new study show that the implantation and explantation of this type of micro devices can be carried out safely in humans and that the electrical stimulation of these electrodes, which penetrate into the cerebral cortex, is capable of inducing safely and stably visual perceptions with a much higher resolution than what had been achieved to date. Furthermore, adds Fernández Jover, “the amount of electrical current necessary to induce visual perceptions with this type of microelectrodes is much less than that required with electrodes located on the surface of the brain, which translates into greater safety”.

The complete stimulation system includes a artificial retina that emulates the operation of the human vision system, located inside conventional glasses. The artificial retina captures the visual field in front of the person and transforms it into trains of electrical impulses optimized to stimulate the neurons of the visual cortex through these small micro electrodes. “Thanks to this, the implanted person has been able to recognize various complex stimulation patterns and accurately perceive shapes and letters,” explains the UMH professor. In addition, a learning process occurs over time, so that with proper training it is increasingly easier to recognize different patterns. To aid her in the learning process, the researchers created several video games, such as a variation on the classic Pac-Man (“Pac-Man”) or a game based on the popular television series The Simpsons.

In the context of this research, Professor Fernández Jover points out that the development of brain visual neuroprostheses it is a necessity for the future, as for many blind people there are no useful treatments or assistive devices. For example, patients with very advanced degenerative retinal diseases or people with severe glaucoma or pathologies that affect the optic nerves, cannot benefit from the modern retinal prostheses that are being developed in some centers. In these cases it is necessary to send information from the environment directly to the part of the brain that processes vision, and the results of this study, although preliminary, indicate that this may be possible and that even after many years of complete blindness, the human brain continues being able to process visual information.

Currently, the research team is recruiting new blind volunteers to participate in these experiments. In future studies, they hope to use a more sophisticated image coding system, capable of stimulating more electrodes simultaneously to reproduce more complex visual images.

In the experiments the Bidons Egara Retinitis Pigmentosa Research Chair of the UMH, the IMED Hospital Group, the CIBER Center for Research in Bioengineering, Biomaterials and Nanomedicine, the Netherlands Institute for Neuroscience (Netherlands) and the John A. Moran Eye Center, the University of Utah (USA).

The study has been funded by the Prometheus Program for Research Groups of excellence of the Generalitat Valenciana, by the Carlos III Health Institute, by the Ministry of Science and Innovation and by the European Commission, within the H2020 program.