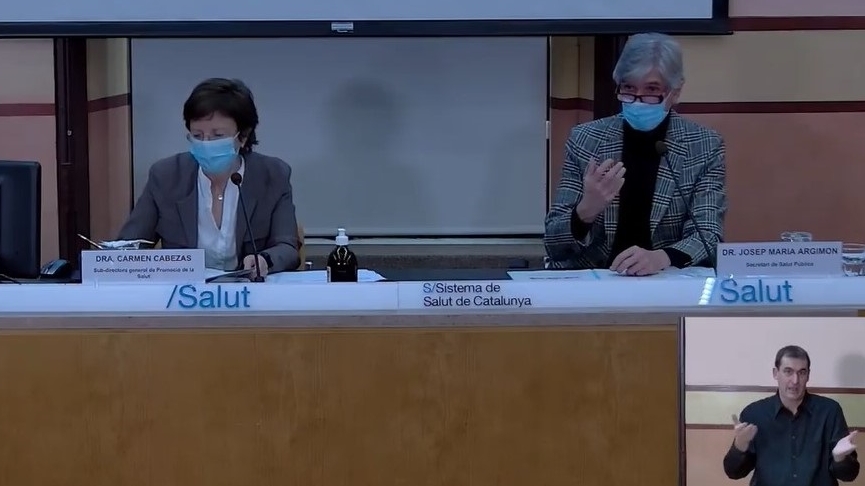 The residences are already safer. Catalonia has administered the second dose of the coronavirus vaccine to 60% of the users of nursing homes, and the first to 90%. The Generalitat hopes to match the percentage in the next two weeks. “These are very good data”, celebrated this Wednesday the general deputy director of Health Promotion, Carmen Cabezas. The data confirm that hospitalizations of residents have decreased by 20%, while they have risen among the non-vaccinated population sectors. The positivity rate in tests has also dropped, 38% in one week. However, the sector asks for prudence.

The residences begin to see the light at the end of the tunnel. The vaccination process is taking effect in one of the worst hit sectors throughout the pandemic. The Department of Health confirmed that the rate of hospital admissions is lower in residences than in other settings. Residents admitted have decreased by 20% in the last two weeks, while in the rest of the population, income has increased by 5%. “The curve is more stabilized in already vaccinated residential settings. It is very important ”, added Cabezas. The Generalitat already advanced last week that infections begin to decrease 12 days after the first dose. According to data from the Generalitat, the rate of positivity per 100,000 residents in residences has gone from 1,114 to 683 in one week, 38.7% lower. The decrease is more noticeable than in the general population, without vaccination, whose reduction is 16.6%. Residences with confirmed cases have also decreased. Of the 237 centers affected 10 days ago, it has gone to 146 this Wednesday, 38% less.

The transformation of the situation in nursing homes has two reasons, according to the Secretary General of Public Health, Josep Maria Argimon: “Vaccination and screening.” Residents are a priority population in the first phase of vaccination, and the department in November established a weekly screening of health professionals to limit the introduction of the virus from abroad. “In October we changed the workers’ protocol and a fortnightly screening was carried out; and in November it became weekly, ”Argimon recalled.

Professionals in nursing homes show 0.75% positivity, and residents reach 3.4%, notably better figures than those of all of Catalonia, which exceeds 6.7% of positives in diagnostic tests. “The combination of these two elements has managed to protect the residential sector”, defended the secretary.

The Catalan Association for Assistance Resources (ACRA) celebrates the trend in nursing homes, albeit with caution. “These data give us hope, but we want to see the evolution of the sector when we have data on the effect of the second dose”, analyzes its president Cinta Pascual. ACRA agrees on the importance of screening: “Now it works. Before, if there was an infected person, all the workers went home, and you could lose up to 60% of the staff ”, recalls the president. “I don’t know how we would have done it.” analyzes. “Now more people are recovering, it is the great change.” The association applauds the current coordination with administrative bodies, compared to the beginning of the pandemic, but continues to call for improvements. “Now we have more coordination, Health is more at our side, we have resources, material … but we need to implement the medical information system in all centers so as not to duplicate work. And the department does not visit those red residences with outbreaks on a daily basis, as it should, but I understand that Health is at its peak right now ”.

“There has been, especially at the beginning, a lot of disorganization, and the general feeling is of tiredness, both for residents and for workers and families,” highlights a director of a residence belonging to the Generalitat. Despite everything – in his case, it took almost 20 days to vaccinate all the workers with the first dose – he agrees that there are fewer infections and hospital admissions. “If it is because of the vaccine, we will see, we must be careful. But it is true that we are more prepared, more aware and we have more protection material. It would only be missing that we were like in April! ”, He indicates. That month, in this center there were 17 infections from 66 users, and since then if there have been positives it has only been among some workers. Like many nursing homes, it trusts the vaccine but asks for caution when faced with the desire to leave the elderly.

A total of 83,638 residents in nursing homes and health professionals in Catalonia have already received the two doses of the vaccines, which represents 1.1% of the Catalan population.

Argimon advanced that Catalonia, where the curfew, municipal confinement and nightly closing of bars and restaurants are still in force, will announce openings in some economic sectors today, although he did not specify which ones: “There must be small reopening, but they will be measures of continuity”. The new measures are explained by the improvement of the data. “We have been going down for three weeks, at a slow pace, to 2%, but in the last three days it has accelerated at a rate of between 5 and 7%. Now we have about 20,000 positives a week, and we hope to reach 16,000 soon ”. Argimon refused to take drastic, total closure measures, as occurs in oceanic countries. “New Zealand is a good example, but they are different cases: it has a population of 4.5 million people, and a much lower density. Europe, by culture, does not enter into this strategy, which is to close everything ”.

Health also announced that a first case of the South African strain was detected in Barcelona this Thursday, the first in the State without relation to African countries, according to the first analyzes. The department also specified that the British strain is already introduced into the community and represents between 3% and 12% of the total positives.

In Catalonia there are 1,045 geriatric residences, and the Generalitat exhaustively monitors their condition. Currently, there are 810 centers, 77.5% of the total, that are completely free of the virus, cataloged with the color green. There are 21 more centers than in the third week of January, which indicates that the residences have achieved a certain shield against the advance of the third wave of coronavirus. 154 centers, 14.7%, are classified as orange, that is, they have a case of covid 19 but it is well sectorized and isolated. And with the color red are 80 centers, 7.6% of the total, which have uncontrolled coronavirus cases. Although the residences that are in this situation are also much less than in January, when 137 centers suffered outbreaks. Currently, 11 residences are managed by the Generalitat.