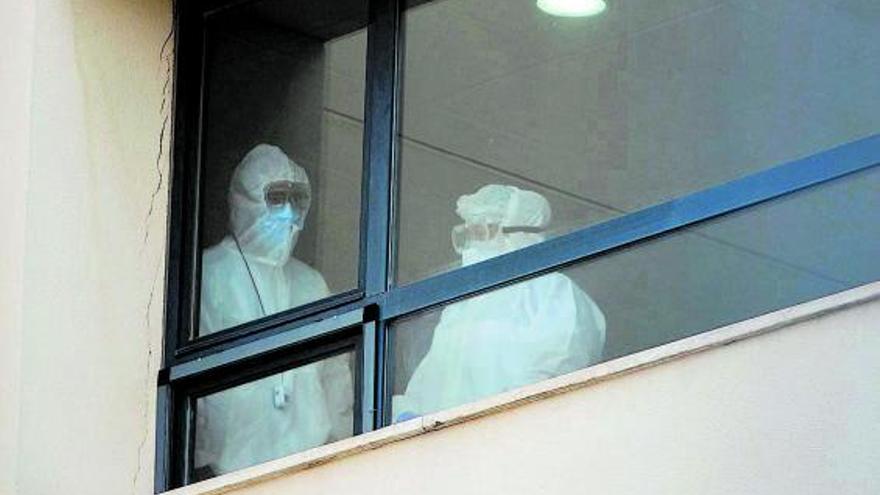 a impaired immune system that, even if they have the complete schedule, it makes the elderly respond worse to vaccines; a more transmissible variant and the reopening explain the return of the coronavirus to residences. Despite this, fatality has fallen to 9.2% after exceeding 21% in 2020.

Then there were no vaccines; Without them, the scenario lived now would have been similar, or worse, to that of the first wave, because at the virulence of Sars-CoV-2 The worsening of the sequelae left by isolation would be added to the elderly, the president of the Spanish Geriatrics and Gerontology Society (SEGG), José Augusto García Navarro, tells Efe.

The incidence in residences has increased because it has also increased outside; but most are asymptomatic cases or very mild, “discomfort” that has nothing to do with the serious symptoms that often ended in death, continues Julián Domínguez, spokesman for the Spanish Society of Preventive Medicine, Public Health and Hygiene (Sempsph).

If vaccines are so effective, Why are there deaths in residences when 99.5% of its users are fully vaccinated? No vaccine, neither the coronavirus vaccine nor any other, is one hundred percent effective because, explains Eva Martínez-Cáceres, vice president of the Spanish Society of Immunology (SEI), there are patients with immune systems that, like those of the elderly, respond worse – or even not at all – to these drugs.

A recent study with the participation of the Higher Council for Scientific Research, published by “Science Immunology”, reveals that age increases the frequency of having an altered immune response that prevents covid-19 and that 20% of those over 80 years of age who pass severe disease have autoantibodies that suppress the immune system response.

Factors to which we must add another: they are people with a multitude of associated pathologies who become more infected and develop a more serious disease: the elderly in residences, according to SEGG data, have different mean 7 active chronic diseases -In most cases in a very advanced state- and they consume an average of 11 drugs.

The latest statistics published weekly by the Imserso, from August 16 to 22, reveals that 941 positive cases have been detected through 20,657 tests, with a positivity of 5% (half that of the whole of Spain, which is 10.37 %). In this same period, 745 residents have died from all causes, of which 149 were older with covid. Eight of them in the Valencian Community.

Since the beginning of March, the fatality rate in residences is 9.9%, when the accumulated rate for 2020 exceeds 21%. In total, 30,155 have died, of them 10,492 in the first wave with compatible symptoms but no confirmed diagnosis. The deaths in these centers are counted as deaths with COVID, not COVID. If the incidence increases, so does that of people who have died with a positive diagnosis.

«How to determine if he has died from a viral disease or because this disease has produced a decompensation of one of his previous pathologies? It is impossible ”, affirms the geriatrician. “It causes a lot of decompensation, like the flu”, a virus that can be attributed to 3,900 deaths in the 2019-2020 season.

Be that as it may, the return of the virus to the residences worries, and a lot. With the lessons learned from the terror suffered there, How is it possible that it has sneaked in? “What is happening is not something crazy or absolutely unexpected,” says Domínguez, head of Preventive Medicine at the University Hospital of Ceuta.

And what is happening is the conjunction of a increased incidence fruit of the delta variant, more transmissible than the previous ones; non-sterilizing vaccines that do not prevent – although they do minimize – contagion, and the relaxation of measures.

The virus, says García Navarro, also general director of the Consorci de Salut i Social de Catalunya, has returned in three ways: visitors, workers and exits of the residents themselves abroad, in which come into contact with unvaccinated, mainly young people. “It was done very well when they were prioritized, but perhaps we were not aware that, by relaxing the measures, the virus could re-enter,” acknowledges Martínez-Cáceres, head of Immunology at the Germans Trias i Pujol University Hospital. “With that euphoria that they were already vaccinated,” he laments, “we did not think about looking at their vaccine response.”

The spokesperson for Social Policy of the PP in the Cortes, Elena Bastidas alerted that “something is wrong” in the residences for the elderly in the Valencian Community after the new Covid outbreaks and has asked the councilors Mónica Oltra and Ana Barceló “to act and stop passing the responsibility. In a statement, the popular deputy has indicated that August “has been a disastrous month” for residences.