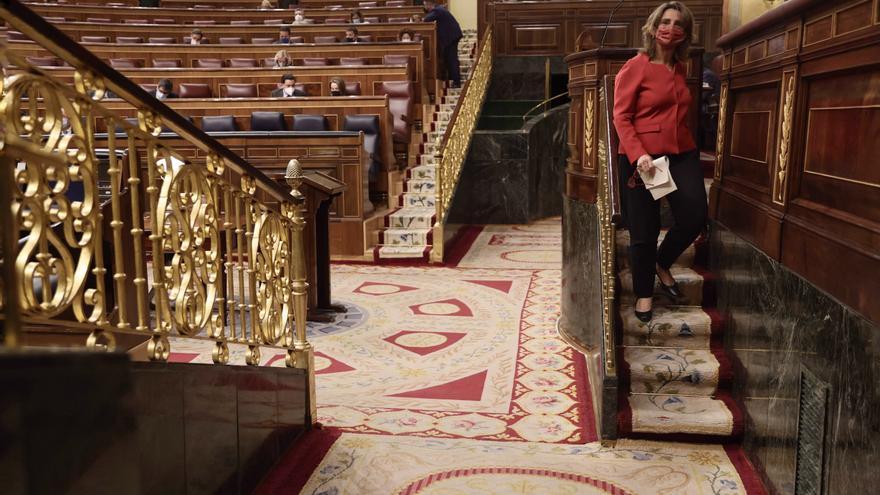 The government launched a shock plan last summer to cushion the impact on bills that pay homes and businesses of the strong price rises of the electricity and gas. For the electricity bill, the Executive applied drastic temporary reductions in taxes (which will be maintained until at least April) and in the regulated part of the bill (which has been softened since January), as published The Newspaper of Spain.

In the case of the gas bill, the Ministry for Ecological Transition established a cap on uploads that should be applied in the regulated gas tariff, called the Last Resort Tariff (TUR) and that the Government revises every three months fundamentally based on the evolution of the gas price in international markets.

As the gas price has been skyrocketing for months and touching all-time highs, exorbitant increases in the TUR were expected and the Executive established that only a maximum of 15% of the cost of the raw material will be passed on temporarily (two quarters) in the October and January revisions of the regulated rate, to which 1.5 million customers are welcomed, mainly households and SMEs. In October, the regulated gas rate It should have risen 26% and, thanks to the Executive’s measure, it did so by 4.6% on average. And in January, it increased by 5.48%, compared to the almost 84% that was forced by the increase in the price of gas in international markets.

The small gas consumers covered by the TUR were thus saved from the sharp rises that were going to be reflected in their bill in the middle of winter. At least for a while, because these increases will be applied to your deferred receipts. All the increase that has not been passed on since October or since January, will begin to be applied in installments month by month, in principle, from April (if the Government does not extend the measure beyond the two quarters currently planned).

The gas companies that offer the regulated rate (subsidiaries of Naturgy, Endesa, Iberdrola and EDP) they stop charging their clients during these six months millionaire amounts recognized by law, waiting to enter them little by little as of April. The gas sector had been warning in recent months of the need for the Government to specify when and how this deferred rise would be passed on.

The uncertainty about the formula that would be used for this deferred payment and the lack of specific legal guarantees in this regard meant that the companies’ auditors could demand provisions to cover these amounts, which would cause a broken millionaire in the accounts, or include caveats in the financial results of the companies, according to various sources in the gas sector. But The Government has found the formula to prevent companies from facing this difficult situation, to the satisfaction of the large gas companies.

The Government included at the end of last year in the royal decree that extended the anti-takeover shield for strategic companies and the public aid framework, also an article that modified the shock plan to avoid the rise in electricity and gas. A modification through which the Government gave total guarantees of collection by law to last resort marketers. All that debt becomes directly backed by the gas system, so the collection is taken for granted and dilutes the demands of the auditors of the large energy groups.

“The procedure for recovering the amounts owed may not be terminated until the marketers of last resort have recovered all of them., including, where appropriate, the corresponding interest. The invoicing of the last resort rate will be responsible for these payments, and failing that, these will be considered a mismatch between income and costs of the gas system”, establishes the new wording introduced by the Government to guarantee collection to companies.

Also Read  The incidence of coronavirus in the province continues to rise and stands at almost 3,350 cases per 100,000 inhabitants

The government also made a nod to the big industry directly affected by rising gas, allowing companies that are forced to reduce their production to modify or suspend the contracted gas flow, as in the worst moments of the economic slowdown caused by the pandemic. But energy and industrial companies have more grievances tied to gas prices.

The business associations that bring together the entire gas sector (the transport and distribution network groups and also the marketers) and the large industrial gas consumers have been pressuring the Government for months to get a reduction of the taxes that are included in the gas bill, similar to the one that is being applied to the electricity bill.

Both the employers of the Sedigás gas companies and the association of large GasIndustrial consumers are demanding a reduction in VAT that is applied to gas consumption from the current 21% to 10% (as is already the case with electricity and water). and also a reduction in the Special Tax on Hydrocarbons to the minimum allowed by the European Union (going from 0.65 euros for each gigajoule to 0.30).