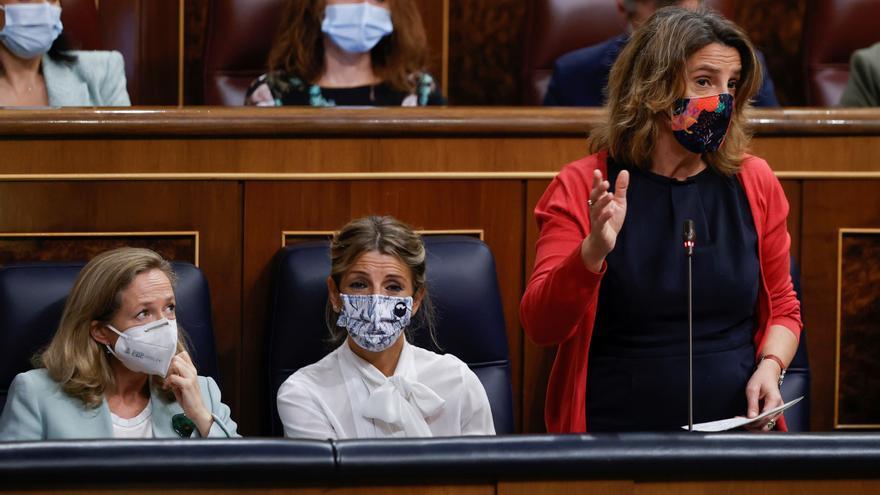 The Minister for Ecological Transition, Teresa Ribera, has assured that Spanish domestic consumers will see at the end of 2021 that they pay the same for electricity, or the same on average in the whole year, than what they paid in 2018.

Ribera, during the control session of the Government in Congress, thus responded to questions from the popular deputy Guillermo Mariscal, whose party the minister has accused of ignoring what is being experienced in the world, such as high prices in international markets, that there is a European regulatory framework for electricity and that there is a tense relationship between Algeria and Morocco which has interrupted the entry of Algerian gas through the latter country.

The also third vice president has taken the opportunity to remember the PP what was their energy policy and has accused them of making electricity more expensive by trying to prohibit the closure of the power plants more expensive, those of coal, and putting what was known as the sun tax, an obstacle to the development of renewable self-consumption.

On the day after the last renewables auction was held, the minister reminded the popular deputy that, when they were in government, they created renewable energy auctions that operated with ground prices, which prevented the consumer from reaching the end best prices.

However, with the current model, which debuted in January this year and in which participants bid by price, An average price was achieved in that first auction in January, in which 3,000 megawatts (MW) were awarded, of 25 euros / megawatt hour (MWh), and in yesterday’s, “in the most complicated circumstances” (with high prices in the wholesale market), according to Ribera, it was 30 euros.

In this type of auction The successful bidders are granted an economic regime that allows them to receive income through the sale of energy in the market, with the particularity that for a specific volume of energy and within a defined period, the price of the sale of energy is calculated from the result of each auction.

Ribera has also referred to the electrointensive industry and has stated that “there is not enough coverage” for the fixed costs that this industry has.

However, he has ensured that the Government continues to work to help reduce these costs through guarantees and the Spanish Guarantee Reserve Fund to sign medium and long-term energy purchase contracts, but also seeking consensus between energy agents and industrialists.

Price weighs on the industry

For her part, the Second Vice President of the Government and Minister of Labor and Social Economy, Yolanda Díaz, acknowledged this Wednesday that the price of electricity in industry is a “burden” for the Spanish economy and companies.

“On a worrying issue,” Diaz responded to a question posed by PP deputy Teodoro García Egea in the session of control to the Government in the Plenary of Congress.

In his question, García Egea has also referred to the evolution of unemployment data, denouncing that since PSOE and Podemos came to the Government There are 3% more unemployed, 3.5% more women unemployed and 1.8% more unemployed under 25 years.

In addition, the PP deputy has indicated that 8% fewer contracts were formalized in September and 9% fewer permanent contracts. “We already know their employment strategy: the self-employed are unemployed, the unemployed are forgotten and the convicted, to the Ministry of Equality“, has affirmed García Egea.

The minister, for her part, stressed that “she does not share the catastrophic vision” that the PP has and has ensured that the total number of unemployed, 3.2 million, is lower than the 6.2 million that the PP Government had, which also brought the youth unemployment rate to 56%.

“Fortunately we have 10,000 fewer young people unemployed than when we came to the government”, The minister pointed out, adding that in the last seven months unemployment has been reduced by 752,000 people and that enrollment in Social Security is in record numbers.

“Never in a government of the PP hubor a record number of affiliations to Social Security, 19.5 million. Look for you, and you will see how the PP governing, without suffering the crisis and the pandemic, they did not reach that figure, “he stressed.