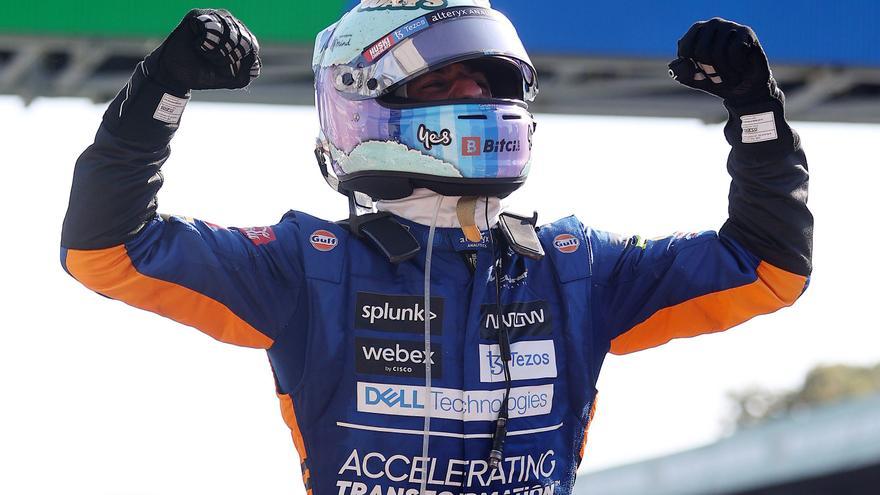 Australian Daniel Ricciardo (McLaren) surprised at Monza by imposing a great pace from the start of the Italian Grand Prix, in which he overtook the Dutchman Max Verstappen (Red Bull), who later abandoned when he collided with the British Lewis Hamilton (Mercedes) on lap 26, and won the race on a podium in which he was accompanied by his teammate Lando Norris and the Finnish Valtteri Bottas (Mercedes).

Race marked from lap 26 in which the first two classified in the pilots world, Verstappen, leading by five points, and Hamilton had an accident in the first chicane that knocked them out of the race on lap 26 of the race, causing the safety car to exit.

It is a historical accident. An accident that will remain etched in our retina forever.

In a start that was going to mark the race, Hamilton surprised when he came out with the hard tire that, a priori, gives less grip at the beginning, but did it more when the traffic lights went out. Blazing exit, next to that of a Ricciardo who managed to take the lead with his McLaren, and attacked Verstappen.

They arrived in parallel to the second chicane and the Dutchman did not leave space for the British when they were wheel to wheel, but the stewards decided that he did not deserve any type of sanction. Hamilton fell to fourth place again and the two McLarens held off the title contenders until lap 26, when everything changed.

Also Read  What happened to the cross on which Jesus died (and was it really found?)

A start in which the local driver, Antonio Giovinazzi, was about to cause the safety car to leave. At the same point in the fight between Hamilton and Verstapen, the Alfa Romeo driver went long, returned uncertainly to the track and touched the right front wheel of a Carlos Sainz who could not do anything to avoid the touch, although his Ferrari could continue without problem.

Accident between Verstappen and Hamilton

Calm tense in the head, with Hamilton trying to overtake Norris, but to no avail until the pit stops began. The first was Ricciardo, leader, biting into the threat of Red Bull, which on the following lap, when Verstappen did the same, turned against them. 11 seconds to switch to hard tires for the Australian’s 2.4.

Norris took advantage of it to stop and start ahead, like Hamilton, although his stop was slow too (4.2 seconds) and at the pit exit he changed the race completely.

The Mercedes came out paired with Verstappen and, aware that in his first fight there was no penalty for ‘MadMax’ by leaving him without space, he did the same, but the Dutchman did not skip the curve, he tried to get the car in spite of everythingBut he jumped when he ate a banana and jumped over Hamilton’s car.

The two out of the race, adding spice to their fight for the title and with the touch between them at Silverstone in the memory. Of course, the most important thing, the two came out on their own feet thanks to the halo, cockpit protection system, which prevented Verstappen’s car from falling on Hamilton’s head.

The safety car on the track and the rest of the drivers took the opportunity to make their stop. Ricciardo remained in front after the restart, but Mexico’s Sergio Pérez and Finn Valtteri Bottas appeared in the equation. Of course, it turned out well for the McLaren team because with 11 laps remaining, they began a fight for the last place on the podium that made them lose a lot of time.

McLaren calmly lived the last laps. Nobody disturbed them from behind and they signed a historic double for the British team completed with an extra point for the winner, Daniel Ricciardo, who set the fastest lap on the last lap of the race. McLaren had not won a race since Brazil 2012 with Button.

Take out the BOOT Ricciardo that I want to celebrate 🥾 🇦🇺# ItalyDAZNF1 🇮🇹 pic.twitter.com/uCIM3c4WoT

Behind, the two Ferraris, without rhythm to fight for the front positions, lurking waiting for the error and taking advantage of Pérez’s five-second penalty for overtaking Lando Norris off-track, which made them close their home race with the Monegasque Charles Leclerc 4th and the Spaniard Carlos Sainz 5th.

53 laps in which Fernando Alonso managed to gain two positions with respect to his start, but which can ascend another one, up to seventh place, due to an investigation pending the Canadian Lance Stroll (Aston Martin) for exceeding the allowed speed with double flag yellow. The Asturian’s partner, the Frenchman Esteban Ocon, finished tenth closing the points.