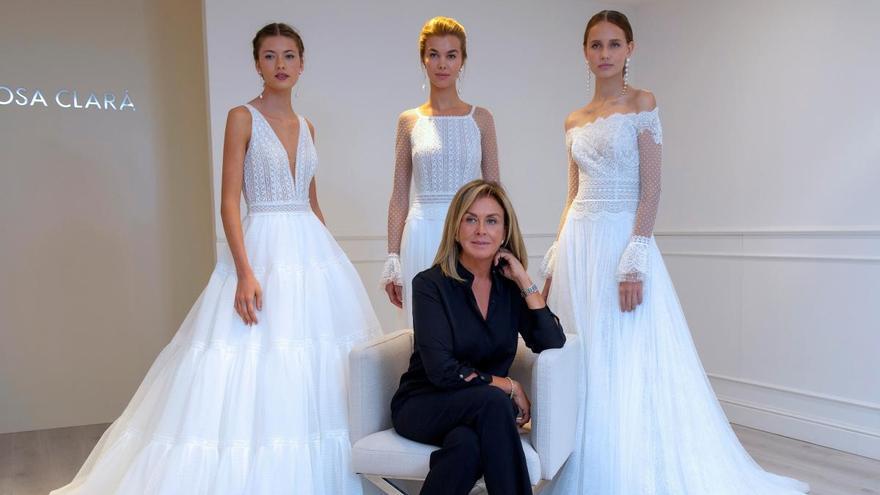 The firm of fashion bridal Rosa Clará, who has dressed women like Paula Echevarría, Paulina Rubio, Antonela Roccuzzo -wife of Leo Messi- or Marie Chevallier, in her relationship with Louis Ducruet, son of Estefanía de Monaco, celebrates her 25th anniversary at the time “most complicated” of its existence.

When Rosa Clará opened his first store his intention was to dress brides “in a different way”He says in an interview with Efe, in addition to launching his own collection, because – he says – what the brides asked of him was something “different” from what was on the market at that time.

And it has succeeded. In 2019, it opened new stores in two key business points, Mexico City and London, which were added to the existing ones in Barcelona, ​​Madrid, Paris and Miami (United States). Currently, the firm is present in more than 86 countries on five continents, with 140 exclusive stores and more than 4,000 points of sale around the world.

“I didn’t think we were going to get that big.”He says 25 years later, although he was very clear from the beginning that his business strategy was to build an international brand. Now he would like to fulfill the “biggest dream” of his life, which is to open his own store in the main capitals of the world.

With his gaze fixed on the rear-view mirror, he makes a “positive” balance of the time that has elapsed, in which he even had the opportunity to write a book, “Wedding Secrets”, but admits that he has never lived a time “so complicated” like this one, in which he wants to send a message of hope to brides who have had to postpone their wedding.

Ahead of her time, she proposes an alternative to the brides who pass through her workshop so as not to cancel or delay the link: “The secret is in the quick tests.” “In the same way that a photographer or florist is hired, we will end up hiring health personnel” for the events.

The intention is that Before entering the church or the court, the guests take a COVID-19 test. “This way, security will be guaranteed quickly. We are already in communication with a reliable company to propose this option.”

With an established style, in 2002, the firm began a new chapter with the first collaboration with an international designer: haute couture icon Christian Lacroix. This alliance, followed by others with prestigious designers such as Karl Lagerfeld, Zuhair Murad and Jesús del Pozo, meant the definitive leap for the firm.

“These collaborations have been very important for the company”, a union that gave prestige to “timeless” collections that resist the passage of time, “with simple lines, but with great complexity in the structure”, always made with exquisite fabrics and materials to live a “very special” day .

She will always be “grateful” to popular women who, being able to choose any other creator, opted for her designs on their wedding day, as happened last year with Mery Perelló, wife of tennis player Rafael Nadal, assignments that have entailed Clará ” an illusion and a joy “.

Reveal that over time the ones who have changed are the girlfriends. “They arrive at an age where they know what they want, with a lot of information that comes from the online world”.

With the intention of continuing with an upward trajectory and with “a thousand projects” to do, Rosa Clará, who assures that “in times of crisis the sense is sharpened”, prepares the “future” of this family business incorporating her son, Daniel Clará, for when he has to give up the witness.

“I enter with great humility”, says Daniel Clará. An incorporation that occurs after a long period of academic training and in the company, in which he has been working in different departments – he has even lived in China for two years, “to open a market there” – and in which he now gives your first steps in the creative area.

“Passing the hard part, I am very involved in the company, but the time has come to share spaces for when that day arrives,” concludes Rosa Clará, who considers it to be the “finishing touch” to an entire career.