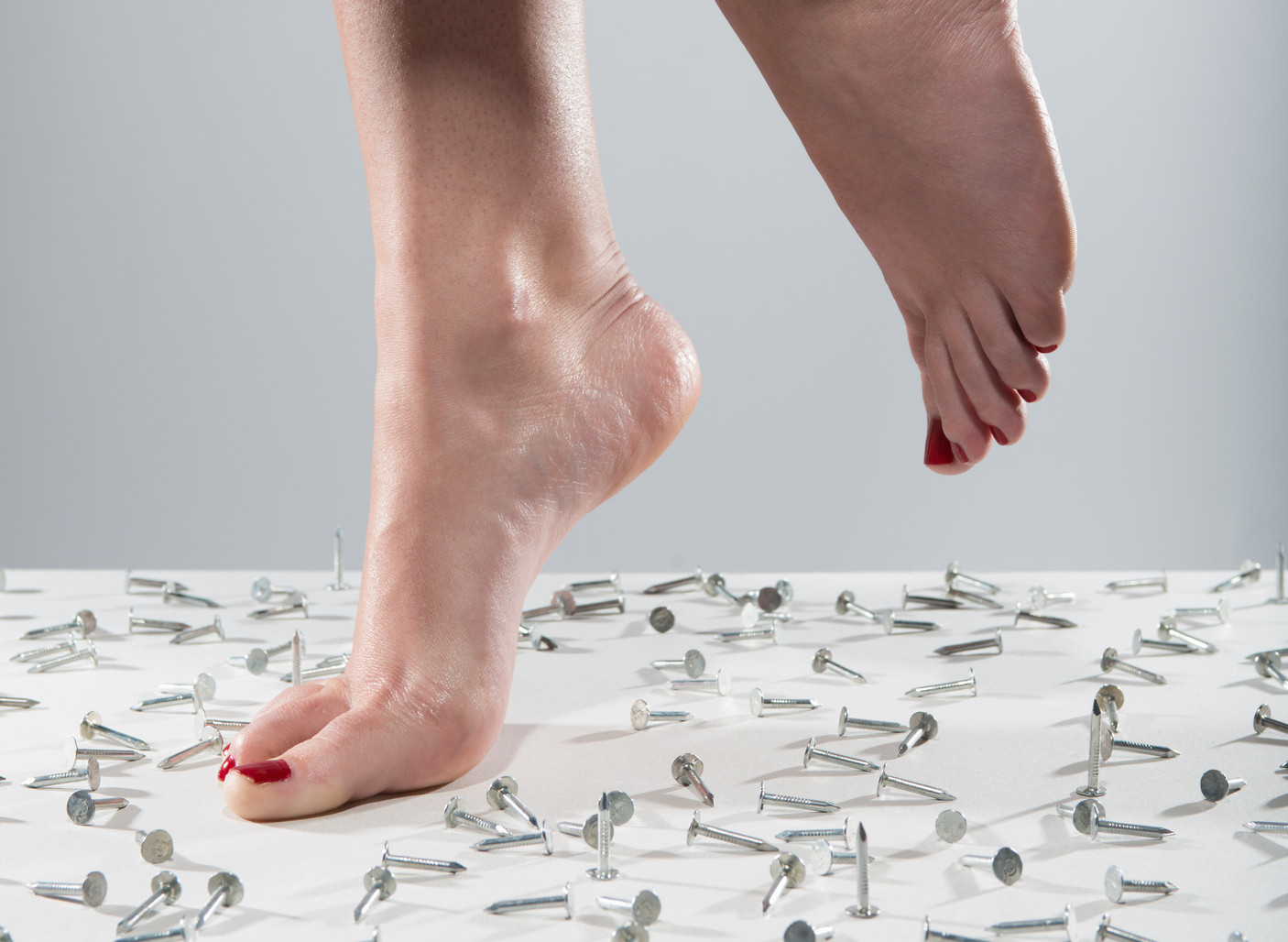 Nobody would think of standing at a wedding in beach flip flops. Nor go running in heels or go swimming in a pool with ski boots. However, it is more than common to see people training in the gym with running shoes. Of course, logic would say that being sports they should be valid to do any type of sport, but the reality is that it is not. We should not wear shoes running to do CrossFit. Not to sweat your shirt in a HITT training or to get on a boxing ring to punch. “Each sport requires specific movements and the shoes are designed to facilitate them in the most efficient way possible”, explains Luis Vaquero, coach by Reebok. And not only will we be able to do the exercises better with the Sports shoes adequate, but we will avoid problems.

Running shoes are designed with the two essential movements of the sport in mind: landing and taking off of the foot. “They are limited to protecting the impact of landing and ensuring that the minimum possible kinetic energy is lost during takeoff”, clarifies the coach. Depending on the design, they will promote speed more by leaving the joints more free or protect them at the cost of slowing down. But beyond that, they don’t have much more mystery. But nevertheless, in other disciplines the movements of the feet are very different and much more varied. Take note, this is what you should take into account to buy the shoes that best suit each sport.

Before we go into home training, a piece of advice that applies to everyone: go buy them at the end of the day, after having spent time upright. So the foot will be dilated and there will be no surprises with the size. “Each manufacturer works with lasts. Some are narrower and others are more generous, ”says Vaquero. If you are one of those who always buy the same brand, you can start looking for them online. Otherwise, always check that there is a space equivalent to one thumb between the big toe and the end of the shoe, and that the ankle is well-seated at the rear. It is the way to ensure that it is the right size.

To do CrossFit, look at the sides

The rooms for this type of exercise are the closest thing to an indoor military training ground that one can imagine. Huge wooden boxes to jump on, thick and heavy ropes that serve to exercise the arms by moving them as if they were tentacles, wheels type monster truck (those XXL trucks) that must weigh tons … They are temples of sweat in which you have to move dodging, moving and carrying objects; while they run burpees, squats, jumps and other exercises. In short, a sport for superhumans that has nothing to do with running.

“For this type of exercise and other similar ones such as cross training or functional training you have to look for a shoe designed to suffer in 360º“, says Vaquero, who adds that for this reason it is necessary that they have two qualities:” A upper —The fabric above— with high resistance to erosion generated by rubbing in exercises such as rope climb (climbing a rope) and a stable sole with a specific density to cushion well the jumps and the load of weight ”. Nobody wants to be in the middle of a WOD (short for Work of the Day, “Workout of the day,” one of those gym slang words) and end up with open-top sneakers or smashed heels.

Without reaching the exaggerated drawing of a trail (that sport that consists of running on mountain trails and other steep roads), those of CrossFit they are not flat either. In addition to cushioning jumps, they must ensure good traction to avoid slipping and favor an almost simian grip when transcending the rope. Some brands – such as Reebok or Nike – extend the rough pattern of the sole to the sides of the shoe, precisely to improve grip when climbing.

Science shows that these design changes are necessary. A study from Saint Mary University (London) concluded that specific shoes for weightlifting (the more serious and Olympic version of CrossFit) favor knee flexion and allow you to maintain a better posture when doing squats than running shoes. Y not to mention trying barefoot. Other investigation found that it produces more hip rotation that results in an imbalance when exercising.

Flexibility and stability for HIIT … or dance

Although most people make the same mistake (“85% of the people who go to HIIT wear shoes of running“, says the trainer), you should know that they are also not valid for high intensity interval training.”In this type of routine, multidirectional movements are madeIt’s not just landing and taking off ”, continues the expert. Consequence of wearing the wrong shoes: “After several sessions, the hamstrings may complain of being overworked to make up for all the shortcomings in the shoe. In short: you don’t train efficiently because your footwear is less in each session ”, he clarifies.

The right shoe for the frenetic rhythms of HIIT classes should therefore support movement. What you should look for is optimal support and a very flexible sole that allows you to bend your foot without slipping. The workouts in which the fitness with dancing —such as Sh’bam or Zumba—, in which all kinds of wiggles are required at the feet and ankles (twists, jumps, twists …), they require shoes with similar conditions. As in high-intensity workouts, “it is important that they hold on well, allow movement and guarantee good adherence to the ground to avoid slipping,” says Vaquero. Although they have some more specific characteristics.

Sports shoes for these dance exercises tend to be soft and cushioned, so that it fits the foot like a glove. When you go shopping, take a good look at the sole: it is normal that they have a circle to favor turns. Like those of spinningThey usually have a velcro closure for a custom fit. Do you have hypermobility in your ankle? Look for slightly low-top models that protect you from excessive twisting.

Boots (or, failing that, light footwear, without toes or heels) is precisely the type of footwear that recommends the Boxing Federation for fans who want to get on a wheel to practice this sport. Yes, like the ones Rocky would wear: with breathable, lightweight and highly adaptable suede upper fabric. The heel must be reinforced to give solidity to the point of support, but at the same time allow the speed of movements without being stuck to the ground. Although if what you practice is aerobic boxing, some like those of cross training they will be sufficient (that is, good grip and ease of movement).

Bonus for gyms with padel court

If you are one of those lucky ones who goes to a gym with a paddle tennis racket slung over your shoulder, you should know that this running it is not worth it either. Basically because they will make you stick to the ground of the track and not give one. The same will happen with the sports of streetwear (those that one wears to walk comfortably on a day-to-day basis). In this case, the final choice depends on the type of track. “To play on artificial grass the best is a sole with studs: it offers the best relationship between grip and a controlled glide. For tracks with a lot of sand, the herringbone pattern offers maximum grip. Finally, there are multipurpose soles, for artificial grass and hard court, with a balance between grip and gliding ”, concludes Pablo Salvador, K-Swiss marketing manager.

But be it paddle tennis, boxing, CrossFit, Zumba or whatever sport it is, all shoes have an expiration date. Wear when doing exercise it is unavoidable. It also happens to those of running, whose death date is usually marked exceeding 800 kilometers or 1,000 kilometers due to the impact that the sole and midsole receive. In the modalities indoor These two parts of the shoe do not usually suffer as much. So, How do you know when to change them? The first thing to do is look at the traction. “If you notice that it is starting to not grip or there are holes in the rubber, your shoes are definitely asking for retirement,” says Vaquero. Attentive also to the upper zone. “When it has too many war marks (abrasions, scratches or holes in the fabric), when we notice that it does not hold the foot well”, adds this expert.

To delay the time of change as much as possible, extreme hygiene. Nothing to leave them sweaty in the gym bag waiting for them to macerate. “When you get home, it is always advisable to empty your backpack so that it can be ventilated and leave your shoes on the window, on the balcony or in a room like the washing machine. Breathable fabrics are useless if we leave them sweaty all night in the gym bag, ”says Vaquero. And finally, remember that the inner sole is usually removable. Go ahead and let it air out of the shoe. You will greatly reduce the chances that the permasmell seize your precious slippers.