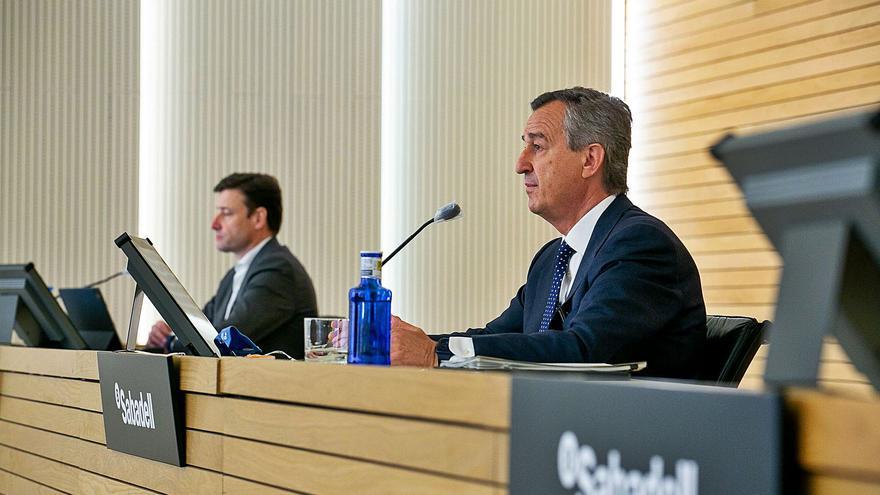 This was stated by the manager in his first public appearance to present the quarterly results of the entity, which are settled with a profit of 73 million euros. A figure that, although it represents a decrease of 22% over the same period last year -which still did not capture the effects of the pandemic-, is above market forecasts, as evidenced by the rise of around 9% which experienced its listing on the stock market yesterday.

In any case, both González-Bueno and the new financial director of the entity, Leopoldo Alvear, who accompanied him in the presentation, made it clear that they are not satisfied with this figure and that they expect a considerable improvement in earnings in the coming quarters. In fact, the chief executive of Sabadell pointed out that one of the bank’s new guidelines is to shift the business objectives from achieving volume to profitability. Results that, in addition, will require each of the three units into which the bank’s structure in Spain has been divided: that of individuals, where it sees “room for improvement, especially in costs”; that of companies, where the objective is to reinforce the leadership it holds; and corporate banking, which he considered a “solid and profitable business.”

Bankers’ salaries, the most regulated

Asked about the criticisms of the vice president Nadia Calviño to the bankers’ salaries, the CEO of Sabadell did not want to assess whether they are excessive, but he did defend that “there is nothing more regulated in Europe and Spain.”

The savings that the bank will achieve with its last ERE

The 1,800 agreed departures that Sabadell has already executed in the first quarter and other measures adopted in its efficiency plan will allow the entity to save 141 million euros per year, according to its managers.

Asked if his words implied a new cut of offices and personnel, González-Bueno did not want to specify or rule out anything, but stressed that the financial sector as a whole has a problem of “structural costs”, due to the changes in habits that have occurred – the bank already carries out 94% of its main operations digitally – and also due to the pressure that It exists on margins and prices. “The business needs to act on the cost side,” he stressed at the insistence of journalists to clarify their plans.

However, those responsible for Sabadell pointed out that adjustments will not be the only factor that will make profit grow in the coming quarters, and they alluded to what they called “tail winds.” On the one hand, the increase in the volume of credit, especially mortgages, during the first quarter of the year, which will allow higher income in the coming months. Also to the maturity of some debt portfolios that were especially expensive and, on the other hand, to the savings that the exits of workers already executed will suppose. Circumstances to which the improvement of the economic situation will have to be added.

On the other hand, the new strongman of Sabadell also highlighted the entry into profit of the group’s British subsidiary, the TSB, after three years of losses and justified in this change in trend the council’s decision to abort its possible sale and maintain it in portfolio. Similarly, he supported the decision of the board of directors to reject possible mergers and to continue alone: ​​“The results before provisions are very good, the best in the market. There is a basis to build an enviable franchise, “said the manager.

The bank increases its business volume in the Community by 18%

The Banco Sabadell closed the first quarter of the year with a business volume in the Valencian Community of more than 42,500 million euros, which represents an increase of 18% over the same period last year, according to the information provided by the entity. Among the businesses that performed best at the start of the year, Sabadell highlights the 13.8% increase in the volume of mortgages granted, with 1,374 operations and an amount of 140 million euros. In addition, the entity improved the contracting of insurance, a segment in which it already has 248,210 clients in autonomy, which generated premiums of 46.8 million.