The Sahara Euskadi Movement has carried out rallies this Saturday in the three capitals of the CAV and in some thirty towns to denounce the breakdown by Morocco of the ceasefire agreement in Guerguerat, enclave that connects the Occidental Sahara with Mauritania, and in solidarity with the Saharawi people and the Polisario Front.

In the case of Bilbao, the mobilization took place from 12 noon in front of the Arriaga Theater, where after a banner reading ‘Sahara Askatu’, the participants shouted ‘Guilty Morocco, responsible Spain’.

The mobilizations have been joined, among others, by the unions ELA, LAB, CCOO, UGT, Steilas, ESK, CNT and EHNE that they have also wanted to demand that the Spanish Government assume its responsibility regarding the “last non-autonomous territory of the African continent pending decolonization.”

Likewise, in several of the mobilizations carried out it has been possible to see representatives of eh Bildu and the coalition Together We Can -IU.

The Sahara Euskadi Movement has demanded mediation “with initiative” by the Spanish Government in the conflict and has criticized that the Executive “is subordinate” to the wishes of Morocco.

Hundreds of people have participated in the demonstration called in Donostia-San Sebastian by this platform, made up of 35 Basque associations in support of the Sahrawi people, with the support of the Polisario Front delegation in Euskadi, which has toured the streets of the Gipuzkoan capital this afternoon. 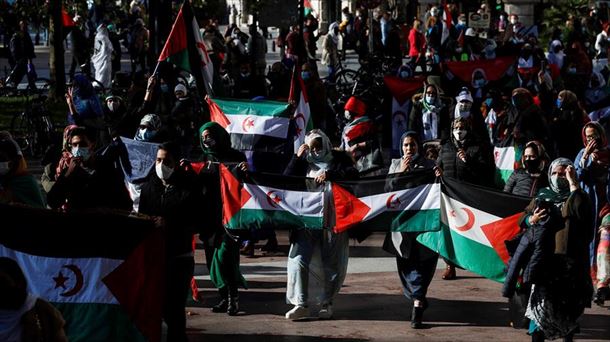 After several recommendations made by the organization from the kiosk on the Boulevard to maintain distances, carry the banners between less than six people, use the mask and ignore the provocations that, apparently, occurred in the mobilization carried out this week in the capital of Donostia, the march started after 12:00 hours after a banner with the legend “Colonialist Morocco. Out of Sahara.”

The protest, which has had a wide participation of Sahrawi women dressed in their colorful outfits and wrapped in Sahrawi flags, has gone amid shouts as “Spain attends, Sahara is not for sale”, “Polisario will win” “Guilty Morocco, responsible Spain” that have been chanted in Arabic, Spanish and Basque.

“They have invaded a territory that was theoretically guarded”

The president of the Association of Friends of Western Sahara of San Sebastián, Jose Angel Zuazua, has indicated that the objective of the protests is to vindicate the right of the Saharawi people to “maintain peace and self-determination, which is what they established at the time.”

“It is regrettable that Morocco has broken the ceasefire” which has prevailed since 1991, Zuazua pointed out in reference to the displacement of troops, on November 13, to the demilitarized zone of Guerguerat with the aim of reopening the passage blocked by Sahrawi civilians since October 21.

Regarding this violation of the 1991 Peace Agreement, Zuazua has indicated that what “most bothers from the political point of view is that the Government of Spain is subject to the decisions of Morocco.”

At this time, the forces of the Alawite kingdom “have invaded a territory that was theoretically guarded” by the United Nations Mission for the Referendum in Western Sahara (MINURSO) and “Morocco is using it for the plundering of Sahrawi assets”, has pointed out.

Zuazua has indicated that the call responds to the call to the San Sebastian citizens to reject this situation and has recalled that “for many” years the city “tunes” with this cause, “welcomes Sahrawi children and is twinned with Daira de Bojador.