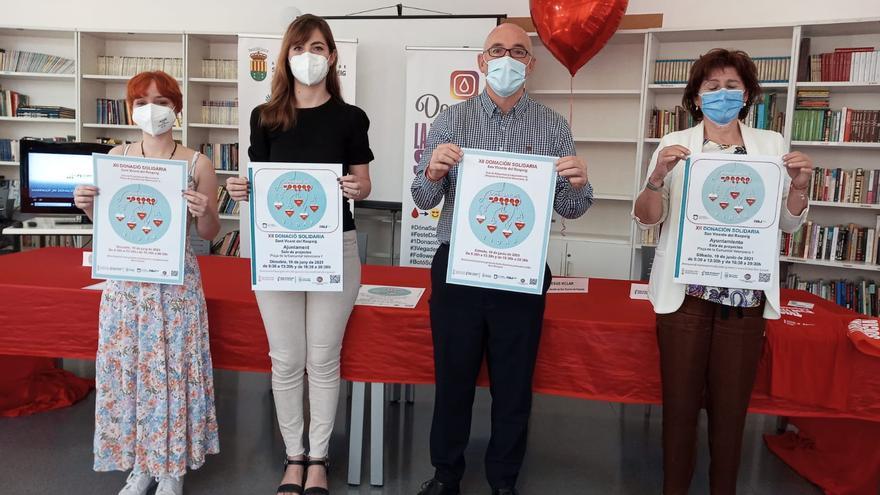 This blood donation campaign has the collaboration of the Youth Council as the main promoter. And its councilor, Lucía Rubio, has called on all young people in the town to participate. The mayor, Jesús Villar, has expressed the importance of donating. “To collaborate by donating blood is to achieve the greatest possible solidarity, because you do not know who will receive it, but you can save a life, which is why from the San Vicente del Raspeig city council we are totally committed”.

For its part, Head of Promotion of the Transfusion Center in Alicante, Paca Ferrer, appreciates “the positive response from both the consistory and the public.” He declares that “thanks to San Vicente del Raspeig there is blood in the hospitals. And above all, at the disposal of all young people, from which a new solidarity interest is born, since blood connects us all, present past and future “.

The youths They have been participants in different activities to promote this initiative. The Councilor for Youth and Health and Consumption, has explained that the union between youth and blood donation is essential. “We began to combine these two terms through different activities, including the design of the campaign image through youth participation and its subsequent voting on social networks,” says Lucía Rubio.

During the weeks leading up to Saturday 19, the Youth Council has launched a contest in which San Vicente’s youth could be the image of the XII Solidarity Blood Donation campaign.

A power strip as a metaphor

Claudia Saez, student of the EASDA, has been the winner of this contest. He explains that he was looking for a design that would attract attention because “with a single donation, you reach a lot of people.” “I designed a power strip, a technological symbol with which young people feel identified. Many devices can be charged from a single connection. The same thing happens with blood donations; several lives can be saved from one person, ”says Claudia Sáez.

Likewise, the XII Solidarity Blood Donation will have young people as voluntary promoters of the event, who will encourage the population that passes there to donate blood. And with a video present on social networks, he aims to raise awareness about what it means to be able to help through blood donations. Three videos that follow a common thread, and in which young amateur actors and actresses have participated.

In turn, the blood donation day will be enlivened with the art of live painting from Lidia Guerrero and the music of sitar Xavi Ganjam. In addition to having the Legion 501, dressed in their costumes Star Wars, with which it will be possible to take pictures with her.

Three lives with every bag

The Alicante Transfusion Center aims to exceed 150 donations. They highlight that since 2019 the donations made have doubled, surpassing only 2,000 in San Vicente in three months. Only in Alicante an average of 250 units of blood is received every day.