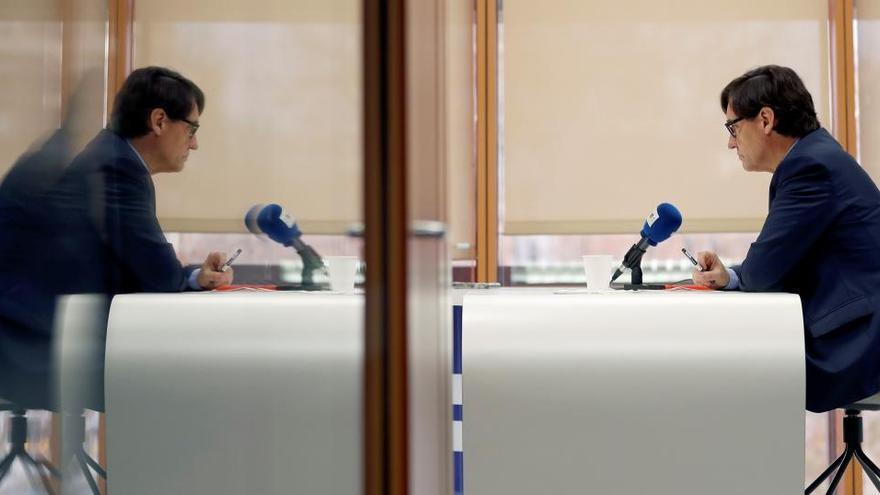 Almost a year after taking the reins of the Ministry of Health, Salvador Illa acknowledges that mistakes have been made by everyone And, despite the complicated moments that this “terrible” pandemic has brought him, too, I would accept the order again. “I don’t regret it,” he says.

“I’ve done the best that I can“He acknowledges in an interview with Efe in which he takes stock of these almost twelve months of pandemic and comments on the projects he has planned for the department he has directed since January 13, just the nightmare of the covid-19” leave space “.

In what is not going to “lose a minute” is in battling with any autonomous community, even if there is one that tries. “My belligerence is focused solely against the virus. The rest, not a minute “, ditch.

Illa believes that the coronavirus “surprised everyone”, and that made it necessary to adopt measures based on the information that was being received, provisions that at that time were believed to be “correct and adequate”; reviewing now decisions that were made in the first wave with current data – he believes – “is not very honest.”

“I have to admit that everyone was late, also Spain“, admits the minister to point out, however, that even” going late and making mistakes, we were also the first to react“, decreeing the first state of alarm and the confinement of the population just two days after the WHO declared the pandemic.

Island considers “required” to make an independent assessment, “of course, of the action of the Ministry, the Government, the communities and the health systems”, but it must be “constructive” and carried out by experts from different disciplines.

To this end, a working group was set up in the Interterritorial Council of the National Health System, focused on developing the framework in which this evaluation will take place, which it wants “as soon as possible.” “There are those who have been interested from day one, more than in fighting the virus, in fighting the Government; there they are. We want to make a constructive, serene, leisurely evaluation that gives us guidelines for action looking to the future, “he adds.

Your most difficult moments

Illa recalls two of the most difficult moments she has faced: the first, she says without hesitation, is the peak at the end of March and the beginning of April, when the daily deaths numbered in the hundreds to almost a thousand. Another “not easy” moment was that of restricting attendance at funerals: “If it is already very painful to lose a loved one, not being able to say goodbye to him, not being able to accompany him, multiplies that pain,” he laments.

And, internally, the day of May in which the then Secretary General of Health, Faustino Blanco, who from the first day asked him to be relieved, had to be seen in the emergency room for a heart problem “due to the pressure suffered all these months.” “I was asking him to continue, so when this happened, I felt a little responsible.” Fortunately, remember, “everything went well.”

Despite all the troubles, this year the minister remains with the behavior of the public, which “has been exemplary”, as has also been the response of health professionals.

The pandemic has brought out “the best of ourselves, and sometimes also the worst. We all have images in our minds of examples of solidarity “, such as the automobile sector devoted to the manufacture of respirators or the textile manufacturing of masks.” There have been things that give goose bumps, because there have been very spontaneous reactions at a time of much harshness, in which everyone has understood that it was necessary to rediscover this community dimension and that we do not live in isolation, “he concludes.

Illa received “as an honor” the offer of the President of the Government, Pedro Sánchez, to replace María Luisa Carcedo in Health, a position that he would assume again even knowing the one that was to come just a few days after being appointed. “I do not regret having accepted the offer of the president; I felt it at that moment as an honor and I have done things the best I could. Of course, If we had known that this was going to happen, the approaches would have been very different, but I do not regret having accepted the position and for me it is an honor, “he reiterates.

The director of the Center for the Coordination of Health Alerts and Emergencies, Fernando Simón, has never asked him to throw in the towel despite the criticism, and he emphasizes that “from minute zero” he has performed his tasks “in a very exemplary way” and making decisions that “are very difficult to make.” “Is a worker tireless and very honest“, emphasizes the minister, who remembers that it was not he who appointed him and that everyone knows who did it.

For Illa, Simón “and the Fernando Simóns that exist in our country in the field of public health and in many other areas are exemplary and vocational public servants,” and he considers that the requests to remove him from office “have been a minority and not very representative. ”

After the first and then a second, the third wave began to emerge a few days ago with a progressive increase in incidence, after the communities relaxed the measures at the beginning of December, although he is convinced that all have acted “quickly” and the results will be seen soon.

However, he emphasizes the importance of minimizing mobility and social contacts during these Christmas holidays. “We do not get tired of repeating that Christmas, at home; we do not move and we are with the closest family”, abounds before evaluating the work of the autonomies to stop the increase in cases, since they are acting “correctly”.

believes that Spain is ready to face “what has to come”But, he points out, what must be done above all, and where “you have to put the accent and effort”, is to prevent infections from increasing considerably.

The relationship with Madrid is “good”

The minister assures that the relationship with the Community of Madrid, which from almost the beginning has been one of the most combative with the Ministry’s decisions, “is good.” “In any case,” he warns, he will not “waste a minute in belligerence with any autonomous community.”

Regarding the request made by the Executive of Isabel Díaz Ayuso, to make rapid antigen tests in pharmaciesIlla reiterates that “these things have to be done well”. “It can be studied, of courseí “, and in fact the Ministry is analyzing the Madrid proposal, but still” there are a whole series of details that have been clarified and we are going to see how we can solve them. “Even so, it insists that” things are safe, calmly and without rushing. ”

To try to mitigate the effects of pandemic fatigue in health personnel and the rest of the public, remember that “we already have a horizon”, which are vaccines, which will begin to be administered in Spain next Sunday. “Is a five or six month horizon“encourages the minister, who considers it the beginning of the end, when there is already a sufficient immunized population to be able to begin to relax measures” in an important way. ”

According to the information you have about the new strains of coronavirus detected in the UK and South Africa, they don’t seem to invalidate the vaccine nor that there is “incontestable evidence” that they are much more lethal or that they are more transmissible.

At the moment, there is no evidence that there are cases in Spain with these variants, but Health has commissioned this week the Carlos III Health Institute and the General Directorate of Public Health to update the strain sequencing program “to be vigilant.”

Primary Care is being one of the healthcare services most affected by the pandemic, so the budgets contemplate one billion euros for its reinforcement, and Illa’s intention is, in addition, to continue with the plan approved during the management of her predecessor in office, María Luisa Carcedo. “Is a strategic framework agreed with the communities and those involved very operational, with a series of objectives and challenges and milestones; It seems to me that it is the starting point to invest this money, take this strategic framework, “he asserts.

In fact, Carcedo has been the rapporteur for the recently approved euthanasia law in Congress, with which Illa felt that the “outcry” that existed in Spanish society was being answered. “It is not forcing anyone to do anything, it is giving a right“to those people who suffer an” incurable chronic disease or have an unbearable and chronic suffering, so that they can, if they consider it so and with the due guarantees of public health, put an end to this unbreakable suffering that they have. ”

After this milestone, another of the challenges of Health is toughen the anti-smoking law as soon as possible, since around 68,000 deaths a year are associated with this substance. “We are going to do it as soon as possible to the extent that the covid leaves us space, which will leave us very soon, I hope,” he concludes.