Currently in the West, Samsung enjoys a privileged position in the foldable mobile segment. Among some users, “folding mobile” is practically synonymous with Samsung Fold -or Flip- and, although in China they have more competition with models like the Oppo Find N, in our territory and in the United States they have a comfortable position.

However, year after year they launch new generations of folding ones that have replaced the Galaxy Note (I remind you that the Note 20 Ultra was the last one we saw and its concept is very present in the Galaxy S22 Ultra) and now they have just presented both the Galaxy Z Fold 4 and the Galaxy Z Flip 4.

We have already told you about the folding shell type in some impressions that, if you like this design, I recommend that you do not stop reading, but now we are going with everything you need to know and some impressions of the Samsung Galaxy Z Fold 4.

A design that sounds familiar to us, but that is more refined (although the S-Pen is left out)

In the table you have the characteristics and everything you need to know about the Galaxy Fold 4but taking advantage of the fact that I had it in my hands a few days ago, I think I will tell you what the mobile has seemed to me in these first impressions.

The first thing I have to tell you is that it shows that Samsung has tried to reduce the weight of the device. If you are one of those who is going to make the leap from a previous Fold to the new one, you will immediately notice that reduction.

The Fold 4 is still a pretty chubby mobile when it is folded, this is totally logical and a condition of the folding ones, but at least it feels less “hulk” in the pocket or when we have it in our hands.

With one hand it still seems like a very comfortable folding due to the dimensions of the “external” screen (although it is true that it also has its negative part that I will comment on later) and, in essence, we have a design practically traced to that of the previous generation.

It has a few millimeters less here and there, the screen frames are also more contained and it has lost weight, but the concept, the way of using it and even aesthetically, has not changed much.

This is not something negative, not at all, since there are users who love this concept and, precisely, it is the most special mobile that we have on the market right now.

And, beware, although Samsung has told us that they have continued to improve the resistance of the Fold 4 (apart from maintaining IPX8 protection, they have introduced a more resistant inner screen against scratches), you will surely want to get the cover. And yes, the new one seems to be recommended. At least… more than last year.

The one from last year adapted well to the back, made the mobile somewhat wider due to the extra space to put the S-Pen and had a front part that hung in a way that was not only unsightly, but also uncomfortable. 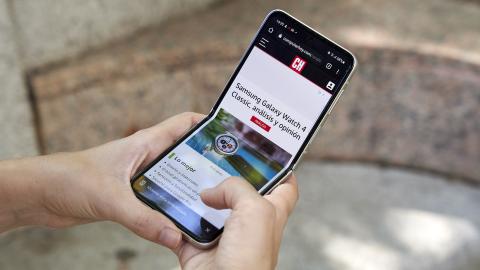 Samsung shares the sales figures of its foldables in 2021, it is far from being a momentary fad and there is a clear winner

The new case is double, so it fits perfectly on both the front and the back and, in addition to better protection, the hole for the S-Pen is now on the back.

This… well, it’s still a little disappointing because I was hoping that it would be magnetized in some way so that I don’t have to buy the cover if you want the S-Pen, but hey, it’s still a workaround (Note, how I miss you less…).

The concept of mobile that becomes tablet continues to improve

But hey, let’s go to the other strong point of this terminal, the screens. Outside we have a screen that maintains that elongated format of the Fold family, but that has been somewhat more comfortable for me to control with one hand.

And it is that, the left part is somewhat narrower, so we reduce the size significantly and it is easier to cover more of the screen with the thumb.

For me, it is still a secondary screen due to its format and HD+ resolutionsince the mobile constantly invites me to open it to enjoy the internal screen, but as I always say in these cases, it is totally up to taste.

One thing I’ve seen is that we can’t watch YouTube videos in 16:9 format in full screen. It may be because of the version of the software or the app, but either way, I understand the decision because, if we enlarge, we would lose a lot of image information.

What I love, and with this I move on to the interior screen, is how well continuous mode works on the Fold. If you are viewing an app on the external screen and you open the device, there is no waiting, there are no loads and, at the moment, you are seeing the same thing, but bigger.

If the app you were using is optimized for the inside screen of the Fold (which isn’t the case with all apps, but Samsung is still working on it), a rich view is created so we have more control.

In addition, the company has continued to evolve the way we run multiple apps at once, we have a dock at the bottom and that makes it very easy to switch from one app to another or put several in a multi-window.

But if you are wondering something, surely, it is if the wrinkle and the camera under the screen are as noticeable as in the Fold 3. The answer is no, so they have improved, but I have not seen a brutal improvement either.

It is true that we must wait for the analysis of the Samsung Galaxy Fold 4 to have it for more days and in more situations, but the camera under the screen is still visible to the naked eye and the fold… well, too. From the front it is true that it is more hidden, but as soon as you look at the screen from certain angles, it is evident.

But hey, as I said at the beginning, despite this it is still a practically unique mobile in the market and the software is what marks the experience with this device.

I can’t tell you too much about the interior because in an hour with the device, what we can get an idea of ​​is the screen and the design, but I’ll tell you in advance that the software of these Fold seems very, very fine to me.

But hey, let’s go to components and here Samsung has not left anything in the pipeline. We have the Snapdragon 8+ Gen 1a chip that is somewhat more powerful than the SD8 Gen 1, but that, above all, is more efficient.

Qualcomm teamed up with Samsung to manufacture the previous generation and we all know the result: an ultra-powerful SoC, but with overheating problems. That in a folding is a death sentence, since the battery flies with that SoC and, if we add these screens and the little space for large batteries… it could be a disaster.

And there are no changes in the battery, since we have the same 4,400 mAh of the previous generation, which, honestly, considering that the mobile is smaller and lighter, I appreciate Samsung’s effort, and what can be disappointing is the load .

They are still anchored at 25 W and you have to buy the optimal charger separately. But well, we will talk about all this in depth in a few days when we have been able to test the mobile as it should.

A camera that evolves to the rhythm of the Galaxy S

And what I also want to get my hands on is the cameras. And it is that, in this generation they are the same ones that we saw in their day in the Galaxy S22 +.

This means that we have an angular -the main camera- of 50 megapixels with f/1.8 aperture, optical stabilization and Dual Pixel system. The wide angle has a 12 megapixel sensor with f/2.2 aperture and we have a 10 megapixel tele with a 3x optical.

We also have a digital zoom of up to 30 times that we will see how it works (the digital of the S22 Ultra is spectacular) and the results are promising.

Now, it remains to be seen how the camera is under the screen. It still has 4 megapixels and these are quite large. As I say, it is visually noticeable, especially with white backgrounds, but the important thing is how they take the photographs and Samsung says that it has improved, but it will be time to try it in person.

Launch and price of the Samsung Galaxy Z Fold 4

As I say, in a few days we will tell you what we thought of both the Flip 4 and the Fold 4, but until then, the contact I have had with these two terminals has left a good taste in my mouth.

The Fold is the one that evolves the most, especially in designsomething that was needed so that, in addition to having a premium price and the flexible screen as the main claim, it felt more current, with those thinner edges or that weight that makes it a little more manageable.

If you’re interested, you can pre-order the Fold 4 starting today, but you’ll receive it on August 26. If you don’t want to book, but would like to have it for launch, stay tuned to the web because in a week we will publish the review.

As soon as we have official information on prices, we will update these impressions.

Also Read  What we know about Lapsus$, the group of cybercriminals behind the hacks of Nvidia, Samsung and MercadoLibre