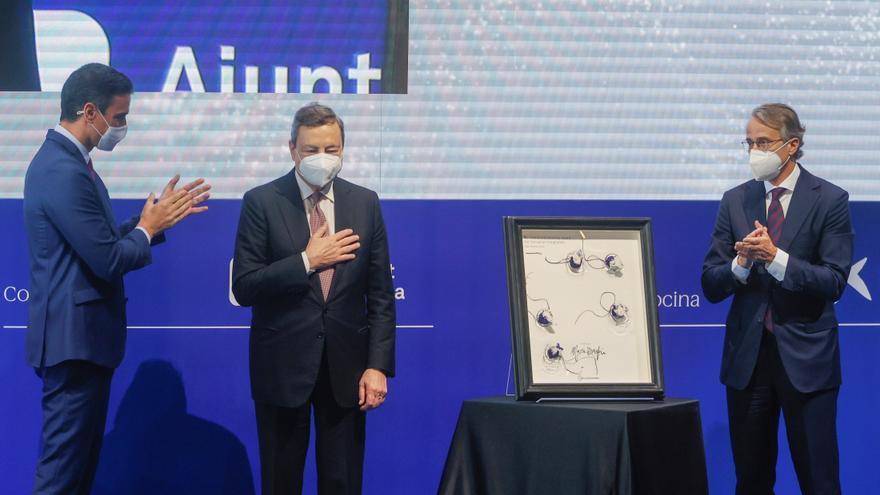 The President of the Government, Pedro Sánchez, and the Italian Prime Minister, Mario Draghi, have advocated this Friday for an alliance between your two countries within the EU to achieve a “fair and sustainable” recovery after the crisis caused by the coronavirus pandemic.

Sánchez and Draghi have presided over the inauguration of the 18 Dialogue Forum between Spain and Italy, an event that will last until Saturday and which hosts the headquarters of Foment del Treball.

This Catalan employers’ association has awarded the Italian Prime Minister the commemorative medal of its 250th anniversary in recognition of his “rigorous work and commitment to public service.”

A distinction that Sánchez and the president of Foment have given him, Josep Sánchez Llibre.

But it was not the only one received by Draghi in Barcelona, ​​since hours before he had attended the closing of the XXXVI meeting of the Cercle d’Economy in which, also with the presence of Sánchez, this business ‘lobby’ presented him with his first award to the European construction.

The two heads of government have subsequently held a meeting at the Albéniz Palace, where they have been received by the mayor of Barcelona, Ada Colau, in which they have commented on various bilateral and European issues.

Specifically, according to Moncloa, they have addressed issues such as EU migration policy, vaccination plans, the covid digital certificate and the priority issues of the G20, which this year is chaired by Italy.

Both of them have referred to some of them in their opening speeches at the Dialogue Forum, in which they agreed with the same words on the potential for joint work that Spain and Italy have: “Together we are stronger“.

Also Read  "Surgeon of the stars" deceived half the world with a false license; they arrest him in Mexico with cocaine and marijuana

Sánchez has called “raise the Spanish-Italian power to its maximum expression“to become the” heart “of the European project and impregnate its debates with a Mediterranean identity.

He highlighted that Italy and Spain are the third and fourth economies, respectively, of the EU and together they account for 25 per cent of the eurozone’s GDP.

“It is the weight of two countries when we go hand in hand, a force always at the service of the European Union”, he pointed out.

As proof of the influence of joint work in Europe, he cited European funds for recovery from the crisis caused by the coronavirus pandemic and that he has stressed that they would not have seen the light of day had it not been for the task of Spain and Italy.

These funds, with the correct execution of which he believes that “Europe is at stake in its future”, considers that they can promote a great transformation of all EU partners by promoting a social vision that leaves no one behind.

In the same line, Draghi has defended taking advantage of the opportunity represented by the Next Generation funds, “a unique occasion” to solve the deficiencies and that “they are not only numbers, objectives and deadlines” but symbolize that the EU has “a shared idea of ​​the future”.

For the Italian Prime Minister, the economic recovery must not only be fast, but also fair and sustainable, and stressed that European funds open the door to building more sustainable, innovative and digital societies.

Sánchez has invoked optimism before the advance of the vaccination against the coronavirus and the opening of a stage of “illusion, hope and confidence.”

A stage in which he has affirmed that Spain and Italy share objectives and before which he has proposed joint collaboration on projects such as hydrogen development, digital transformation and industrial development.

If Spain and Italy manage their recovery plans efficiently and equitably, Sánchez is convinced that the two countries will have even more prominence than they currently enjoy.

In the previous act of the Cercle, Draghi had also advocated an “equitable and sustainable” economic recovery. that does not neglect social cohesion.

The agenda of the 18th Spain-Italy Dialogue Forum includes the participation over two days of other members of the two governments as the second vice president and head of Economic Affairs, Nadia Calviño, and that of Foreign Affairs, Arancha González Laya.

Also from the head of Italian diplomacy, Luigi di Maio, and the minister of Technological Innovation of this country, Vittorio Colao; the President of the European Parliament, David Sassoli; the High Representative for Foreign and Security Policy of the EU, Josep Borrell; and the European Commissioner for Economic Affairs, Paolo Gentiloni.