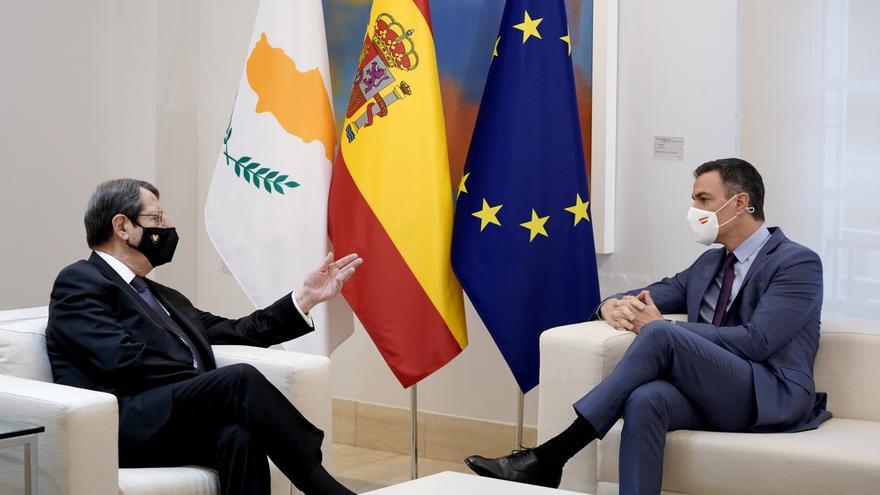 The Head of Government, Pedro Sánchez, and the President of Cyprus, Nicos Anastasiades, They have demanded this Thursday that the European Union advance in the new Asylum and Migration Pact community to guarantee efficient management of migratory flows.

Sánchez and Anastasiades have met at the Palacio de la Moncloa to analyze the bilateral relations, various issues on the European agenda and how to deal with global challenges such as the coronavirus pandemic.

The Government has reported that two protagonists of the meeting They have shown their sympathy on migration management.

What mediterranean countries first entry, they have highlighted the importance of progress in the negotiations to adopt a new Asylum and Migration Pact.

A pact that they defend that allows the EU to guarantee efficient management of migratory flows based on shared responsibility and effective solidarity.

In this sense, Spain, Cyprus, Italy, Greece and Malta, released a joint document last year in which they set out their position on the matter.

Sánchez also highlighted at the meeting the interest of Spanish companies in investing in Cyprus and, especially, in sectors such as tourism, renewable energies and hydrocarbons.

Some investments that are framed in business relationships It is considered that they still have potential and that in 2020 they reflected exports from Spain to Cyprus worth more than 258 million euros and imports for more than 133 million.

The Head of Government and the Cypriot President have agreed to ensure that it is a strategic priority of the EU to achieve a peaceful, stable, safe and prosperous Mediterranean region and have supported the sovereignty and territorial integrity of the countries and the sovereign rights of each state and of its maritime zones in accordance with the International right.

Also Read  The aftermath after ICU

In this regard, they have reaffirmed their strong support for a comprehensive and viable solution to the Cyprus question, based on a bicommunal and bizonal federation with political equality as established by the UN resolutions and in line with the principles of the EU.

The importance of European funds to face the consequences of the coronavirus pandemic is another matter that Spain and Cyprus highlight in a joint statement made public on the occasion of the meeting between Sánchez and Anastasiades.

It also alludes to the importance of share knowledge, skills, good practices and technology about the pandemic.

Pedro Sánchez, before the meeting with Anastasiades. JOSÉ LUIS ROCA.

During Anastasiades’ visit to Spain, three memorandums of understanding in matters of health, political consultations and diplomatic training.

In the field of health, the exchange of information on issues of pharmaceutical products and multiple transplantation procedures is agreed, as well as on the promotion of organ donations, an area in which Spain is a world leader.

The agreement on political consultations between the respective ministries of Foreign Affairs seeks to promote bilateral relations and exchange points of view on regional and international issues of common interest.

The third memorandum promotes cooperation between the Spanish Diplomatic School and the Cypriot Diplomatic Academy.

Sánchez and Anastasiades have reviewed during their meeting some of the issues that will be discussed next week in Brussels at the last meeting of 2021 of the European council, including the possibility of agreeing on joint actions to deal with the rise in energy prices.

Also Read  Montero defends decentralization: “It seeks to bring institutions closer to citizens. It does not go against anyone ”| Spain