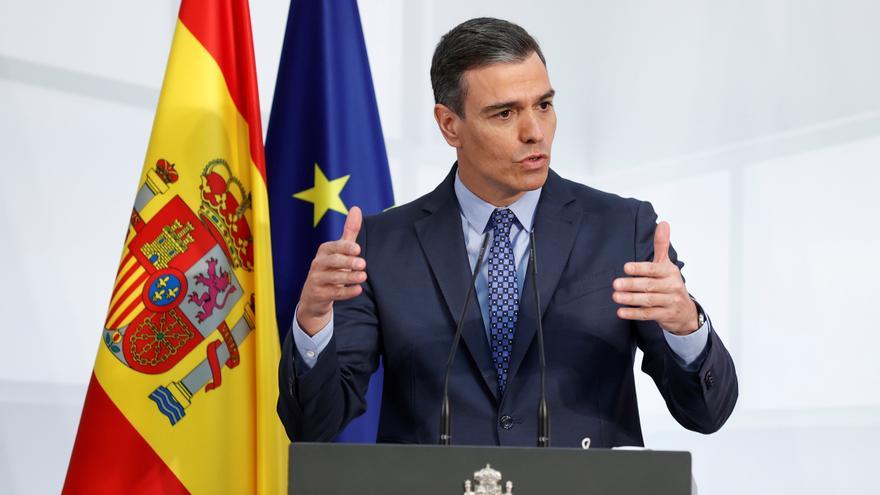 Era February 19, 2020, the Cabinet of the Presidency of the Government had just taken office and it was decided how to bring from China, from the “remote” province of Wuhan, the Spanish trapped there by the coronavirus. “No one could imagine then what came next“. I remembered this Wednesday Pedro Sanchez, in another twin act, at the landing of his new team in Moncloa. On the way, a terrible pandemic that has killed more than 80,000 people in Spain, infected to more than 4.3 million, the GDP collapsed by 10.8% in 2020, the unemployment rate raised to 15.5%, frightened and paralyzed the world, the economies contracted, tourist activity brought down. But the president believes that the worst is over. That now there are grounds for optimism, given the rate of vaccination – 55.7% of the population is already immunized – and the economic rebound, which make you calculate that GDP will grow 6.5% in 2021 and 7% next year, push aided by the hostage of the European funds, whose first tranche of 9,000 million will arrive, in principle, imminently.

That is the climate that the president wants to paint this Thursday from Moncloa, in his appearance at the end of the political course, before the summer break, which will officially start on Tuesday, after the Council of Ministers and his office with the King in Marivent. Sanchez will do balance of the last months —In fact, it will present the 2021 accountability report pompously called ‘Fulfilling‘- and he will seek to project himself into the future, in that “new stage” that he wanted to symbolically open with a profound remodeling of his Government. The socialist leader is determined to focus on management, to launch positive messages, to try to flee from the opposition’s snares, to maintain the policy of outstretched hands with Catalonia, while ensuring that dialogue with the Government does not monopolize the public debate . He does not want anything or anyone to distract him from that goal, aware that he is entering the second half of his term with electoral erosion in tow and with his eyes already set on the polls of 2023.

Just a year ago, at its summer press conference, the confinement had just been lifted and a second wave of covid was beginning to appear – now Spain rides on the fifth epidemic wave – there was no vaccine and the recovery was sensed far away. But the headlines all went to the same point: the defense that Sánchez made of the Crown and its current owner, Felipe VI: the day before, the Zarzuela had announced that Juan Carlos I had left Spain, but did not clarify, nor did the President, where had he left, although two weeks later the same institution, after enormous social pressure, confirmed that he was in the United Arab Emirates. In December, in his appearance at the end of the year, he again came out in defense of the Royal House and announced that they would leave “knowing“How would the roadmap for” renewal “of the Head of State materialize” in terms of transparency and exemplarity. “The Government was not thinking of an organic law of the Crown, but rather more specific measures. It has advanced since then, not a step, nor is it known whether the emeritus king will return to Spain at some point, or what are the conditions that Moncloa and Zarzuela deem necessary.

It is one more of the old unknowns that these months of pandemic course have left, that Sánchez closes with a new Executive not only in the window – the seven incoming ministers, with the replacement of the hard core of power and the fall of Carmen Calvo, José Luis Ábalos and his Cabinet director, Iván Redondo—, but also in the chassis, in the Moncloa engine, with Óscar López, Llanos Castellanos, Fran Martín and Francesc Vallès as new key pieces of support for the government machinery. The president has hardly given explanations of some dismissals that he has covered with mere “changes” necessary to “recharge the batteries”, to rejuvenate his alignment and to face a “new stage” marked by the recovery, the management of the funds and the end of the covid. Redesign to be completed in October with the 40th Federal Congress of the PSOE, from which new governing bodies will emerge. “There are months that are worth years”, He explained to journalists a week ago in New York, on the first stop of his US tour, very focused precisely on the economy. In other words, his government, in an “unprecedented” emergency, had been scorched, and he was urged to renew it to continue “advancing” while the opposition “screams.” A PP, by the way, with which Sánchez does not have for institutional renewal, still pending a year later. And aggravated, because more bodies – such as the Court of Auditors – have been added to the blockade list.

On his trip to New York, Los Angeles and San Francisco, the president put the accent, before potential investors, on the reforms that his Executive intends to implement and that are committed to Brussels (such as pensions, taxation or the modification of the labor market), and also in political “stability”, despite parliamentary precariousness. Hence, the Government has already taken out of the oven the new spending ceiling (196,142 million euros, similar to 2021) and is preparing to draft the Budgets, once again expansive, which it will seek to agree, as a priority, with the partners of investiture, with which he already took out the current accounts. Sánchez also plans to approve the 2023 PGE, since his intention is not to shorten the legislature. On the contrary, it foresees stretch it as much as possible, to give citizens time to appreciate the fruits of the economic revival at the ballot box (municipal, regional, and then general). He said he was not worried about the polls that already put the PP ahead, and in his environment they remember that the distances would be getting shorter and that the wear and tear suffered by the pardons, added to the shock caused by the ministerial restructuring, is slowing the decline.

The tax reform will not be ready by 2022, because the president believes that we must prioritize recovery, but it has accepted, as a concession to United We Can, that in September the rise in the minimum wage be studied if the evolution of the labor market continues to be good. It was announced this Tuesday, surprisingly, by the first vice president, Nadia Calviño, the one who had most opposed the rise at this time. The commitment of the coalition, and that the PSOE ratifies in its framework presentation, is that the SMI reaches 60% of the average salary by 2023.

Waiting for the Court of Auditors

Next Monday the Generalitat-State bilateral commission meets for the first time since 2018, and the second meeting of the dialogue table is scheduled for mid-September. Another old folder that will have no solution in the short term due to the clash with the independence movement. The Government seeks a transversal solution, a better fit for Catalonia in Spain, but it will not give in with the self-determination and amnesty demanded by the Government. Sánchez considers that the pardons page has passed, he hopes that they will serve to establish a “new stage“Based on the dialogue within the Constitution and the law, it offers its reunion agenda. But there is no roadmap drawn up yet. Catalonia, in any case, will be” one more chapter “, not a” single dish “, as they say in Moncloa. One of the many proofs of the turn taken by the Executive is the calm and prudence with which it is guiding itself in the matter of the Generalitat’s endorsement of its former high-ranking officials indicted by the Court of Accounts. The president himself has reiterated that if there are suspicious points of that decree law, they will be appealed to the Constitutional Court, but it has not advanced further, and now it has no choice but to make a pronouncement, because the supervisory body has required the State Attorney to issue a report.

The replacement of the Catalan Miquel Iceta by the Castilian-Manchega Isabel Rodríguez is oriented to the same objective: not to locate all the lights in Catalonia. For now, the Government celebrates the deflammation and the return of the Generalitat to multilateral bodies such as the Council for Fiscal and Financial Policy (it happened this Wednesday). The ‘president’, Pere Aragonès, will not be, however, in the great political appointment that closes this July: the Conference of Presidents that the King will inaugurate this Friday, the 30th, in Salamanca.

“It is it is the place of transformations“Sánchez said this Wednesday to the new high-ranking officials of Moncloa. He urged them to feel” fortunate “for being” in command of the ship “and” starring in this moment of profound change for the good “of Spain. The president does not see shadows on the horizon, despite the uncertainties, risks and the clash with the opposition. In his team they insist that all the figures, those handled by the Executive and by the analysis houses, are “optimistic“, not the result of a” reverie “, although now” it will be necessary to see how those numbers go down to the street “, how citizens feel them. Your collaborators see you”quiet“and” strong “, released after the change of government, of which he feels fully satisfied, a security that he tried to convey to the Spanish press that accompanied him on his tour of the United States and to which he approached, also as a sign of the new times that are blowing in Moncloa, at least for now.