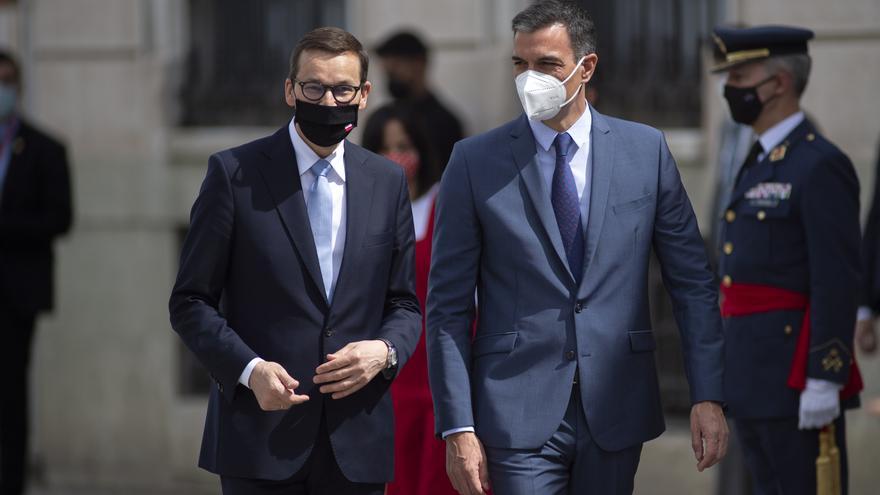 The head of the Government, Pedro Sanchez, has received this Monday in the Madrid town of Alcalá de Henares his Polish counterpart, Mateusz Morawiecki, to head the XIII bilateral summit, which seeks particularly strengthen the relationship in the economic and commercial sphere.

Sánchez received Morawiecki in the Plaza de Cervantes in the city of Complutense, where he had arrived minutes before and where the rest of the members of the two governments participating in this meeting were also waiting.

After the formal greeting and protected with masks, Sánchez and the Polish prime minister have occupied a prominent place from where they have listened to the interpretation of the national anthems of the two countries and have reviewed the troops that have paid them honors.

At the end, they greeted the respective delegations after the Polish ministers participating in the summit joined their Spanish colleagues.

Before the start of the meetings, the two heads of government will sign in the book of honor of the City Council of Alcalá de Henares, in whose plenary room they will meet next, while in parallel there will be sectorial meetings between the ministers in the nearby Parador de Tourism.

A plenary meeting, a working lunch, the signing of agreements and a press conference by Sánchez and Morawiecki will complete the summit agenda.

This bilateral meeting had not been held for four years, and it is intended to strengthen relations between the two countries despite the differences they maintain in some EU policies.

The two countries have a trade balance that tends to balance and that in 2020 reached almost 11,600 million euros, and there are many Spanish companies operating in Poland.

But The Executive considers that in this area there is still great potential that can be exploited.

Spain and Poland have common interests in the EU; they are, respectively, the fourth and fifth community economies, and their size and population are similar.

But there are also issues on which the progressive coalition government has differences with the executive of the Polish nationalist-conservative Law and Justice party, including the migration and asylum policy of the European Union.

There are also notable discrepancies between the Spanish and Polish governments on other matters, such as abortion or gay rights, and Poland, together with Hungary, hindered the agreement finally reached in December on European recovery funds.

Within the framework of the EU aid, Sánchez and Morawiecki will have the opportunity to analyze the evolution of the coronavirus pandemic in their respective countries and in Europe, as well as the vaccination process and the upcoming launch of the covid digital certificate that will facilitate mobility between European countries.