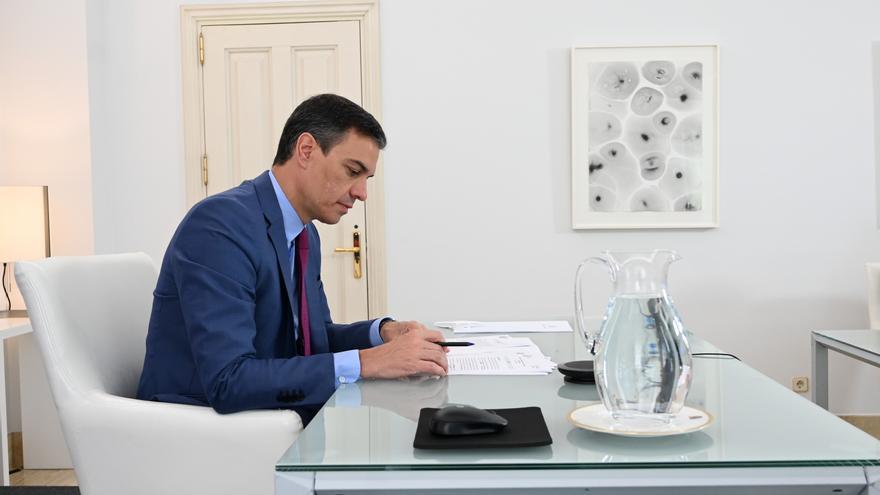 The President of the Government, Pedro Sánchez, received this Wednesday the report of the Economic and Social Council (CES) on the socioeconomic and labor situation in Spain 2020.

The President of the CES, Anton Costas, the vice-presidents of the institution Francisco Carbonero and Javier Ferrer, together with the president of the Memory Work Committee, Raimond Torres, and the Secretary General for Economic Affairs and G-20, Manuel de la Rocha, have delivered the document during a presentation meeting held at the Palacio de la Moncloa.

The report is structured in three chapters: economic overview, job and labor relations, and quality of life and social cohesion in Spain.

As stated by the Government in a statement, “in all the chapters the impact that the crisis caused by the global pandemic has had is evident, pointing out the effort of economic, social and labor cushioning that the stimulus policies implemented in Spain have had, without which the negative effects would have been more pernicious. “

Furthermore, the Prime Minister and Prime Minister of New Zealand, Jacinda Ardern, have once again confirmed their harmony and shared vision in many aspects at the international level at the bilateral summit they have held and which has served to elevate the relationship between the two countries to a new level, that of strategic partnership.

The meeting, held electronically, sends a “important message” on how the governments of two geographically distant countries such as Spain and New Zealand, “share common democratic values ​​such as equality, sustainability and pluralism”, and work together to promote them on the international scene, has defended Sánchez.

Both leaders have agreed on a joint declaration that elevates the relationship to a strategic partnership, which provides for the reinforcement of bilateral contacts at all levels, from political consultations, to the economy, trade, technology, citizenship, culture and sports, and promoting consultation in the face of global challenges, as reported by Moncloa in a statement.

In this sense, the declaration includes the commitment to “exchange reciprocal visits” at the head of Government level. “when the conditions of mobility and international travel allow it”, as well as meetings and consultation “frequently” at the level of foreign ministers.

In addition, they have launched a Global Values ​​Association under which the two countries “will more closely coordinate their efforts to address global challenges and advance an agenda of strengthened multilateralism.” “We will look for opportunities to speak together, and with others, to carry out concrete actions in defense of our modern, democratic and internationalist values ​​”, they explain in the statement.

Boost to the economic relationship

On an economic level, Spain considers New Zealand a strategic commercial partner, which is why Sánchez has addressed our country’s interest in giving a “renewed boost” to bilateral economic and commercial relations on issues such as infrastructure and renewable energy. To do this, business visits are planned when circumstances allow.

Also, in the joint statement, both expressed their support for the “conclusion of negotiations for a free trade agreement between the EU and New Zealand comprehensive, balanced, sustainable and ambitious“which” will provide better trade and investment opportunities “to the two countries.

The pandemic and vaccination have been another of the issues addressed. Ardern has been interested in ‘Vaccines for all’, the initiative of the Spanish Government to fight against the pandemic “leaving no one behind”, while Sánchez highlighted his support for the creation of an International Treaty on Pandemics that encourages shared responsibility, transparency and cooperation between countries that allows them to be prepared for possible future pandemics.

On the other hand, they have also had the opportunity to verify the mutual interest in the conservation of nature, the support for science and research and the fight against climate change, according to the government statement.

In this sense, Sánchez has pointed out the “strong and ambitious climate objectives of Spain and the commitment to a green transition and to raising the level of world ambition“In fact, the agreed text includes that the two countries will collaborate more closely to conserve the oceans, Antarctic marine ecosystems, and seabirds, in particular albatrosses and petrels, an area in which Spain is a leader.

In addition, Spain, with a permanent base in Antarctica, celebrates this year, with an international meeting, the 30th anniversary of the signing in Madrid of the Antarctic Treaty on Environmental Protection, Moncloa has recalled.

Sánchez and Ardern have agreed to continue working together to build a dynamic, solid and forward-looking relationship that contributes to achieving the objectives agreed in the joint declaration, which are based on shared democratic values ​​of gender equality, sustainability, the rule of law and pluralism.