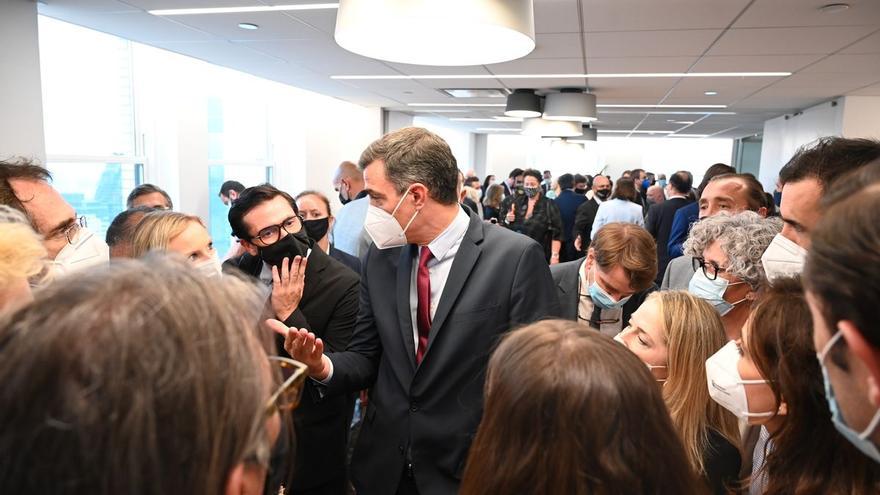 The General Council of the Judiciary accumulate 960 days blocked but, predictably, there will be many more. There is no way out of the mousetrap because the PP does not agree to negotiate, and the President of the Government understands that there is no formula to force renewal, no matter how much pressure it receives from United We Can. After the warning received by Brussels, Pedro Sánchez does not intend to resume the modification of the Organic Law of the Judicial Power (LOPJ) to reduce the majority in the election of the members of the governing body of judges.

The head of the Executive expressed it emphatically this Wednesday. Right at the end of his busy schedule in New York, after inaugurating the new facilities of the Commercial Office of Spain in the American city, and in informal conversation with journalists. Before, too, to take flight to Los Angeles, the second station of his US tour.

Sánchez refuses to “recover” the bill that the PSOE and United We can registered in Congress in October. The text sought that the 12 members of the judicial turn – the other eight are jurists of recognized prestige – were elected by an absolute majority of Congress and Senate, and not by three a qualified majority of three fifths. But that maneuver did not like the European Commission and the PSOE backed down. And then United We can do it. That reform was completely parked. What the groups that support the Government did carry out, with the support of their partners, was that when the five-year mandate of the CGPJ expires, its functions are cut back. Reform that is in force. The current Council was born in 2013, at the time when the PP enjoyed a very comfortable absolute majority, and was the result of consensus with a PSOE that then led the late Alfredo Pérez Rubalcaba. His term ended two and a half years ago.

The position fixed again by Sánchez, a reaffirmation rather of the decision that was already taken months ago, is relevant because the new Minister of the Presidency, Félix Bolaños, is preparing this Thursday to undertake a round of contacts with the groups, starting with the PP, to “restart” the dialogue and seek the replacement in the CGPJ. Bolaños was the one who, as secretary general of the Presidency, at the beginning of the year led the conversations with the popular to unblock various organs. Yes, RTVE broke loose, but the negotiations by the CGPJ ran aground when the PP vetoed the candidates proposed by United We Can, José Ricardo de Prada and Victoria Rosell. With that route blinded, it was impossible to continue talking about the rest of the pending institutions, such as the Constitutional Court or the Ombudsman. This month, the Court of Accounts was added to the list.

It touches “prestige” the organs

Sánchez, in his talk with journalists in New York, He also refused to personally call Pablo Casado to try to resume contact. The mandate, he defended, is to the groups. He recalled that the institutions have done their job and have required the Courts to promote their renewal. So “the one who hinders is the PP” and what it touches is “to give prestige” to the constitutional bodies, he said. The Government has already denounced repeatedly that it is the PP that “breaches” the explicit mandate of the Magna Carta, which obliges the parties to agree, through large majorities, to replace the institutions.

Married, however, he refuses to facilitate the unblocking, arguing that the Executive wants to use the judges for partisan benefit. It imposes as a condition that the “independence” of the Justice be reinforced and that the CGPJ be elected by the judges, and not by the Parliament, as has happened up to now. It alleges that it is the position of Europe. Bolaños, however, said this Wednesday on TVE that what the European Commission “demands” is that the Council is renewed “as soon as possible” and does not criticize an election system “that is more than 30 years old”. Brussels, he defended, “only” requires unlocking. The minister, who defined himself as “a man of pacts,” said he would extend “his hand” to the PP to find a way out. United We can defend that the Executive act to put an end to the “kidnapping” of the institutions and has proposed these days a way out, that the members of the judicial turn be voted, in addition to an absolute majority, with the consensus of half of the groups of the camera. But on the bottom, is to return to the starting point of the autumn to which the president does not want to return: the election of those 12 seats without counting on the PP.

However, the president, in his brief informal conversation with the press, did not want to enter deeply into national politics, because the task of his trip to the US is another, purely economic one: to sell Spain as a powerful pole of attraction for investment. He did not even want to rule on the ten million fund created by the Generalitat to support the bonds imposed by the Court of Accounts on the former high-ranking officials indicted. The Government will finally support directly those investigated for the alleged misuse of public money for the foreign promotion of the process. The minister announced this Wednesday that he is rectifying his position, using the direct endorsement route to protect public servants. The Executiu rectifies because the workers of the Institut Català de Finances (ICF) asked to activate this direct guarantee mechanism, since there is no bank that offers that guarantee, since there are doubts about the legality of the Generalitat decree.

“I can not position myself,” said the president, has no “criteria” yet. What is legal will not be appealed and what may violate the law will be challenged before the Constitutional Court, he reiterated. In other words, the Government maintains the position that it expressed in Tallinn (Estonia) two weeks ago because the decision has not yet been taken.

“There are months that are worth years”

This Wednesday was the first informal meeting of the press with Sánchez since the beginning of April, and the first, of course, since the change of government that he undertook after his tour of the Baltic countries. He also did not want to give the kite more string. “There are months that are worth years,” he explained. In other words, the pandemic, an “unprecedented” emergency, has burned the engines of your ship more quickly, and the “new stage” requires “new equipment.” With the remodeling of his Cabinet, he has responded “to a need to continue advancing” while the opposition “speaks”, without doing.

The polls, however, reflect a strengthening of the PP at the expense of the PSOE. In the majority, with Casado ahead, although the CIS of this Wednesday pointed to a certain recovery of Sánchez after the pardons of the procés, with a part of the field work done after knowing the relays in the Executive. “There will be many more polls until 2023”, when the following generals are called, he pointed out, downplaying the importance of demoscopic studies.

On this trip to the US, Sánchez wants to focus his message on the economic aspect, trying not to distract him. Not even the fact that he didn’t go to Washington to meet with Joe Biden. He assured that he will be “delighted” to see him, but the management has not been done and recalled that the Minister of Industry, Reyes Maroto, who joined him this Wednesday in New York but who previously passed through Pittsburgh and Washington, did dispatch with two members of the Democratic Administration. He explained that if he has not gone to the White House, it is not because of his coalition Executive with United We Can, nor because the “socialist” surname of his Cabinet squeaks at Biden, because he has only received, from among European leaders, the Chancellor outgoing from Germany, Angela Merkel.

“You have to put things on their fair terms. My priority is to encourage funds to bet on Spain, and a videoconference is not the same as a face-to-face meeting ”, he defended. The senior executives of the investment managers and venture capital funds asked him about “everything”, from the labor and pension reform to the housing law that is still stuck due to the disagreement with United We Can. The president tried to reassure them by promising that there will be no ruptures and that the government will continue to pamper the dialogue with employers and unions. Social peace, in short. Some of his interlocutors thanked him for “the direct exchange”, the personal contact. And they recognized the “effort of Spain in the green and digital agenda”. According to his account, he also had good ‘feedback’ from the meetings he had, separately, with Michael Bloomberg, founder of the economic information company Bloomberg and former mayor of New York, and with Larry Fink, CEO of BlackRock, the largest fund in the world. world.

The president’s non-verbal language manifested changes. A certain liberation for having released ballast after the government crisis, also satisfaction with his tour in the US, which now continues in Los Angeles and San Francisco. For next week, he will close the political course in an appearance at Moncloa. It will be on July 29, Thursday. A few days ahead of schedule and on the eve of the Conference of Presidents in Salamanca.