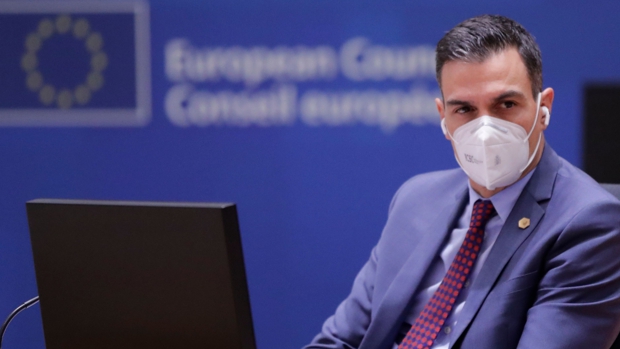 Neither the initiative of United We Can (UP) in Congress to investigate the fiscal situation of King Don Juan Carlos nor the video that the purple formation has spread on social networks with images of the Royal Family with the soundtrack of the television series “Narcos”, based on the story of the bloodthirsty Colombian drug lord Pablo Escobar serving. The president of the Government, Pedro Sanchez, continues to resist censoring the attacks of his government partner on the Monarchy.

“As long as I am President of the Government, the Constitution will be fulfilled in its entirety and throughout Spain,” Sánchez said in an appearance at the end of the European Summit, in Brussels, in which he also hinted that he sees no inconvenience for the return of Don Juan Carlos to Spain because “he has neither more nor less obligations and rights than other citizens.”

In his speech made a defense of institutional stability, including the Crown, and insisted that what is being judged is not the institution of the Head of State but the behavior of a person: Juan Carlos I.

In this sense, asked if he believed it necessary for the Royal House to give explanations for what is happening around the figure of the former monarch, Sánchez said that “many times the explanations are given not with words, but with facts” with an express reference to the impeccable attitude of King Felipe VI, of whom he has praised the exemplary and transparency that he has demonstrated with facts from the beginning to “update an institution like the Crown to the demands of a democratic and advanced society.”

However, when he himself had the opportunity to apply this maxim in the defense of the Crown and the Constitution, he preferred to continue with words – and not very resounding – and renounce facts.

The video of Podemos

The PSOE strives to make clear what its position is: to differentiate the irregularities that Juan Carlos I may have committed from the management of the current Head of State. But the pressure of Podemos in the Government against the Monarchy is every day greater. Today, the parliamentary spokesman for UP, Pablo Echenique, has repeated again that his vocation is to walk towards a republican horizon, even if this legislature is not achieved.

The Confederal Parliamentary Group has registered this Friday in Congress a petition to create a commission of inquiry ‘on the use of opaque credit cards by the King Emeritus, after his abdication, out of funds from abroad. Of course, without having the support of the PSOE.

When asked about his opinion about the video of Podemos comparing the Royal House with the series “Narcos”, Sánchez wanted to avoid the controversy and has stopped with the PSOE and Podemos “They are different political formations that have different traditions”, which is equivalent in fact to tolerate it.

For their part, Podemos defend video. The second vice president’s party Pablo Iglesias does so an identification between the Royal House and the life of drug trafficker Pablo Escobar. The composition lasts just two minutes, you can hear “Tuya” by Rodrigo Amarante and you can see images of the Royal Family, the travels of Don Juan Carlos and even the dictator Franco.

It is not the first time that Podemos has generated and shared audiovisual material that has become controversial. Furthermore, in this case they break directly with the position of the PSOE and attack the entire monarchical institution.

He has also announced that In the next few hours he plans to call the head of the opposition “To see if we can resolve the issue of the government of the judges” at the same time blaming the PP for this delay. In all, that call will not be possible before at least one day, because Sánchez said goodbye saying that all he wanted to do now was rest after a very long summit in which the presidents have been meeting throughout the night.