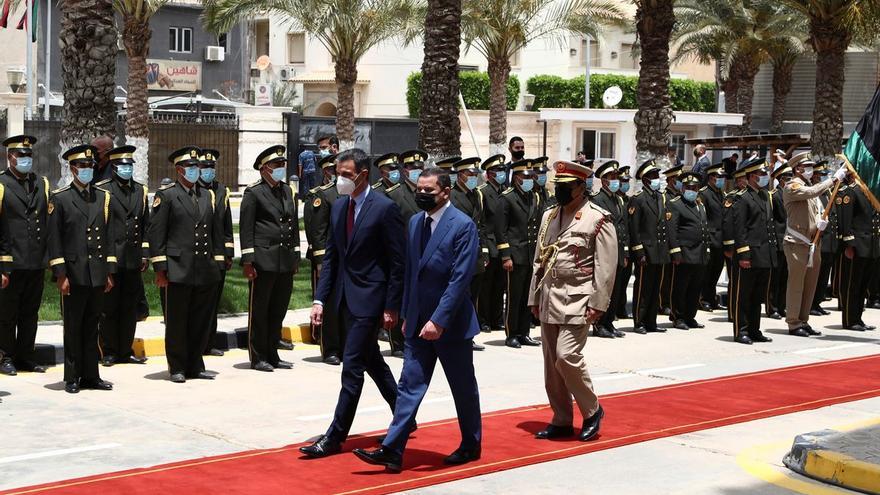 On June 1, the general secretary of the PSOE served three years since his arrival at Moncloa after a fleeting motion of censure, bridged in less than a week. Mariano Rajoy abandoned the power indicated by the sentence of the belt and Sánchez was able to get his party out of the demographic catacombs to form a Government that, in its main lines, has accompanied it ever since. With the forced readjustment, of course, by the incorporation of United We Can in January 2020, after the two general elections that the Socialists won.

The president placed as his right hand Carmen Calvo, ascended to the Secretary of Organization, José Luis Ábalos, to the powerful Ministry of Development (later Transport) and promoted María Jesús Montero from Andalusia. He gave the reins of the economy to a senior EU official, Nadia Calviño; awarded an environmental expert, Teresa Ribera, the outstanding Department of Ecological Transition, and awarded Defense to one of its star signings in the 2016 elections and always loyal, Margarita Robles. And he assigned Fernando Grande-Marlaska to the Interior, a judge who had been well regarded by the right until then and promoted to the General Council of the Judiciary by the PP. In Education he placed Isabel Celaá; in Industry, Reyes Maroto; in Science, to astronaut Pedro Duque, and in Agriculture, to Luis Planas.

That basic design did not undergo too many mutations with the sum of United We Can. There were ministers who left the Cabinet, but not them. The Executive was expanded to include 22 departments and, since then, Sánchez has only made the necessary adjustments due to the departure of Salvador Illa as head of Health – he became the headliner of the PSC for the Catalan elections of 14-F-, replaced by Miquel Iceta, and Pablo Iglesias as second vice president —he left to lead the purple list in the Madrid elections—, replaced by Ione Belarra, a movement that led to the rise of Yolanda Díaz as third vice president.

But now the conditions are different. Now, as confirmed to El Periódico de Catalunya government sources and the socialist leadership, Sánchez is ready for a “deep” reform of his Cabinet. He is “reflecting” on it, they agree, and in fact he has demanded their opinion from party officials and senior executive officers. From these conversations emanates the conclusion that the president would seek to “reinforce the political weight” of his team. A change of faces that in the leadership of the party and members of the Government consider necessary to face the second section of his mandate. In fact, a handover would be congruent with the message that he and his people have been repeating for weeks, that the legislature “begins now”, once vaccination coverage advances and European funds – the mana of 140,000 million euros in six years – will be operational in the coming months.

But the president also needs new fuel at a time when the polls are beginning to place the PP as the leading force in the country and detect a certain transfer of the socialist vote to Pablo Casado after the Madrid 4-M elections. There are those, however, in Ferraz and in the Executive, they advise against the movements because it would be “makeup”, a “more aesthetic” change, a “Placebo effect“- in the words of a minister – a restructuring that” does not concern the ordinary citizen “, more concerned about the evolution of the pandemic or their economic and employment situation.

However, Sánchez has not allowed his collaborators to see the real scope of this possible ministerial remodeling. Everything is in the air. Because he also has two decks to play with: the Government and the party. The PSOE is approaching its 40th Congress: it will be convened in July by the federal committee and will be held between October 15 and 17 in Valencia. Hence, some cadres point out that the chief executive could renew his Council of Ministers in July, after the delicate decision of pardons, or plan to do so closer to the federal congress. The latter would be the most conventional solution and to a certain extent logical, but with Sánchez, a very hermetic leader, the pools are always difficult.

A recurring question is what will happen to Carmen Calvo. The socialist leader relied on it from the first moment and has, as always reiterated in his circle, a high regard for the dispatch of the matters that he entrusts to him, his loyalty beyond doubt and his governmental experience and legal expertise, key to a position as committed as the political vice presidency, the one responsible for filtering the matters that come to the Council of Ministers in the General Commission of Secretaries of State and Undersecretaries. Some leaders see her as “exhausted” in her journey, but most believe that Sánchez will not do without her Unless she asks for it herself. In addition, Calvo, like Ábalos and Montero, are heavyweights in the socialist leadership, highly appreciated by their colleagues, and an ouster would, in the opinion of those responsible consulted, make little sense. All three are even seen as “untouchable” by the president.

Indicated by the opposition are the Minister of Foreign Affairs, Arancha González Laya —Of whom the PP has requested his resignation due to the crisis with Morocco—, and the Minister of the Interior, Fernando Grande-Marlaska. But it is not clear that Sánchez will get rid of them. Until now he has defended them against the opposition and, as they remember in his surroundings, that some of his ministers are targets for the rights is not synonymous with his having a bad opinion of their performance.

But again his relief will also depend on the signals that Sánchez wants to emit: if you prefer to list your Cabinet to the left or reinforce its centrality, and this last message would help the presence of both Robles and Calviño. That is why in the Government there are those who believe that the president will also take into account the ‘input’ he receives from the Andalusian PSOE primaries, which will be settled in the first round on June 13 (and on the 20th in the second round, if none of the candidates exceed 50% of the votes). If Susana Díaz wins, he may be forced to seek moderation, but if the mayor of Seville and the one anointed by Ferraz, Juan Espadas, win, it will be an endorsement of his project from the most important socialist federation.

At the 40th Congress, it is expected, and thus all the commands consulted converge, that the Secretary General will give life to a major change in his leadership. The current executive, with 47 members (two fewer than those she had in 2017, when she was born, due to the departures of José Félix Tezanos and Beatriz Corredor), is a tribute to the tortuous process of primaries that faced Susana Díaz and Patxi López. Sánchez awarded his faithful, those who had opted for him when he was ousted by the notables of the PSOE, composed a very broad and low-profile political leadership and only integrated the ex-Lendakari and the Extremaduran president, Guillermo Fernández Vara.

Sánchez also wants to reinforce the weight of his leadership in the PSOE. Now he no longer needs to pay loyalties because he is president of the Government and the war of 2017, which divided the party, is in the past, although his ‘spin off’ is the Andalusian primaries that will be settled on June 13 in the first round (and the 20 in the second round, if necessary), between Susana Díaz and the mayor of Seville, Juan Espadas, the one anointed by Ferraz. The secretary general, therefore, has full hands free to design a new executive, smaller and more functional and of greater importance. But all the leaders consulted take for granted that the heart of their team – which is made up of the Deputy Secretary General, Adriana Lastra; the head of the apparatus, José Luis Ábalos; the Secretary of Equality and First Vice President of the Government, Carmen Calvo, and the person in charge of Territorial Coordination, Santos Cerdán— will remain.