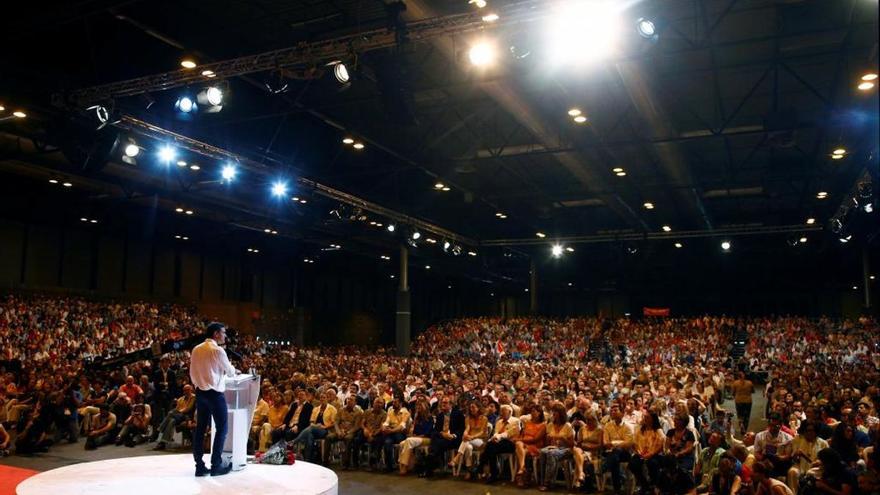 Pedro Sánchez will have, again, an atypical closure of the federal congress of the PSOE. Will draw the curtain in Valencia, Sunday October 17, surrounded by militants and supporters, from the rank and file, and not only by delegates, guests and observers attending the conclave. It will be the first mass meeting of the socialists in the middle of the pandemic. An almost symmetrical photo to which Pablo Casado starred last Sunday in the bullring of Valencia, the arena that evoked the glory years of the PP. But the snapshot that Ferraz is pursuing is not, they insist, a reaction to the closing of the popular convention: already in 2017, the secretary general put the finishing touch to the 39th Congress with a great act. That is to say, that Sánchez he copies himself.

There is barely a week left for the start of the most important event for the Socialists in this political course. The 40th Federal Congress. It will be held in Valencia, in the Fair, from 15 to 17 October. The work in committee and plenary will take place in the same venue, but the closing speech of the leader will move to another pavilion with greater capacity in the same Fair, in order to accommodate more people. Because the delegates elected to the conclave are only 1,082, 532 men and 530 women.

In 2017, a similar number of delegates was appointed – that number is around the PSOE congresses – and some 8,500 supporters attended the closing, according to the calculation offered by the organization. Now, Ferraz does not yet have a preliminary estimate and does not want to fall into the “crushed“to gather more people to compete with the 9,000 people who entered the Valencian arena at the PP convention (and another 3,000 outside). Although the pandemic is subsiding, it has not gone away. In addition, Sánchez’s rally will be held in an interior, and not outdoors, as happened with Casado.

When the current head of the Executive chose that format for the 2017 conclave, he broke the customs rooted in the party. Until then, the closing speech, which always stars the secretary general of the PSOE, took place in the same place as the plenary, before the delegates and guests and observers. But he wanted that major act, in Ifema, to make visible the change of era in the party after a real internal civil war with Susana Díaz and Patxi López as rivals in the primaries. The susanistas made his gesture ugly, because they interpreted that the victorious leader at the polls intended his “enthronement”, his “coronation“, overturning the liturgy of congresses.

Four years ago, the conclave was held at the Palacio Municipal de Congresos de Madrid and the closure, at a pavilion in the nearby Ifema

Actually, that was the only formal novelty, because the ritual was maintained from beginning to end and developed normally in the nearby Municipal Palace of Congresses of Madrid. For the closing in Ifema The only thing left was the proclamation of the results of the votes of the organs, the acclamation of the new executive and the harangue of the general secretary.

Now, in 2021, for the 40th Federal Congress, the staff will be similar. The exact rundown is yet to close, but the basic milestones are defined: opening of the accreditations on Friday the 15th in the morning, formal start of the conclave in the afternoon, convocation of the plenary on Saturday the 16th at 9.30, work in the commissions from from 4:00 p.m., and on Sunday 17, from 10:30 a.m., the closing. But there will be photos that will make this congress unique, which Ferraz wants to be relaunch of the project ahead of the 2023 elections, of internal renewal and of “unity”.

On Saturday the image of the most sought-after unit will arrive, that of Sánchez with the three former socialist leaders: González, Zapatero and Almunia

On Friday the 15th, at 1:30 p.m., the federal political council of the PSOE. In other words, Sánchez brings together all his barons and regional presidents, and he will add his ministers to them. A photo, they emphasize in Ferraz, of the “socialist muscle“: the power of the central government and that of the communities. Image, they continue, which is obviously not within the reach of Casado. The chief executive will surround himself, predictably on Saturday, with the three ex-leaders of the PSOE who are still alive (Alfredo Pérez Rubalcaba died in 2019): former presidents Felipe González and José Luis Rodríguez Zapatero and former minister and former vice president of the European Commission Joaquín Almunia.

That is, perhaps, the snapshot of the most valued internal unit, since González had distanced himself from Sánchez since the 2016 electoral repetition. However, in recent months there has been a rapprochement between the two. The excuse, as reported by ‘eldiario.es’, was the interest of the former socialist president in the energy potential of the surpluses of the biomass after forest fires for citizens living in rural settings. He made his concern known to the Extremaduran baron, Guillermo Fernández Vara, and he acted as a bridge with Moncloa. González and Sánchez spoke first and they saw each other in July and September. Interlocution with Zapatero has been fluid for a long time.

International guests, whose payroll is kept by Ferraz for now, will participate mainly by video. But in the federal headquarters they emphasize that the greater “entity“, the political weight will be in the plenary session.

The PSOE seeks to get ready for the electoral cycle that begins in 2023, and that will have its aperitif in the Andalusian autonomous regions that, at the latest, will arrive at the end of 2022. It will approve its political resolution, the roadmap until the next congress – the framework presentation has received 10,500 amendments, which Ferraz is regrouping these days—, and will renew your address. As stressed last Monday by the spokeswoman in the Senate, Eva Granados, the meeting will focus on “good policy” and will revolve around strengthening the social shield, job creation, and transforming the economy to make it more “robust and equitable “, the ecological and just transition and” full equality “.

The only certainty of the new leadership is that Lastra and Cerdán will continue. From there it’s all guesses in the names

There are hardly any certainties regarding the new leadership. “There are no pools“, says a veteran leader. And it is true. The leader has imposed silence and has shown, as happened with the reshaping of the Government, that with him the bets are not worth it. Yes it is certain, because the president clarified it in an interview in ‘El País’ last month, that Adriana Lastra will continue as deputy secretary general. Santos Cerdán will also continue in Organization, although his position has not been publicly confirmed by the boss. From there, all guesses about names. The only thing that has transpired is that Sánchez is looking for a shorter executive – the current one was born with 49 members, although in these four years two resigned: José Félix Tezanos, president of the CIS, and Beatriz Corredor, to assume the leadership of Red Eléctrica de España— and of greater political power.

The moment is completely different from 2017, when he had to design a tax dome for the primaries waged against Díaz and López. Moncloa was not even close, and today he already has three years in power, five elections won in 2019, an approved Budget and a second already agreed with United We Can. In addition, the president has already sent the message, in the restructuring of his Cabinet in July, that he wants to bring together the entire PSOE, integrating those who did not support him in previous contests, such as the ministers. Isabel Rodríguez, Pilar Alegría or Diana Morant, or their Chief of Staff, Óscar López, and the Secretary of State for Communication, Francesc Vallès.

Sánchez kicks off the 40th Congress with an act in Ponferrada in support of Tudanca, leader and candidate in Castilla y León

The starting gun for the 40th Congress will be given by Sánchez himself this Sunday, in Ponferrada (León), in an act with Luis Tudanca, the regional secretary who will renew his mandate in the conclave of the PSOE of Castile and Leon to be held on November 27 and 28 in Burgos. The presence of the president in the community has an obvious reading: the support for Tudanca before a eventual electoral advance. Because the socialists suspect that the popular Alfonso Fernández Mañueco can press the button for the dissolution of the regional courts in the face of the cracks in his relationship with Ciudadanos, with whom he governs, and the danger of a new motion of censure. The Socialists could present it a year after the previous one, in March, and before that there could be ballot boxes. Tudanca will once again be the candidate for the Junta, although it does not seem foreseeable that he will equal the spectacular result of 2019, when he was the first force but could not govern.