The new ministers They will swear or promise the position today before Don Felipe in the Palacio de la Zarzuela. After the remodeling undertaken on Saturday by Pedro Sánchez, where Carmen Calvo, José Luis Ábalos and Ivan Redondo, among others, were dismissed from their positions; the new members of the Executive will take possession of their portfolios today.

Pablo Montesinos, surprised by the continuity of Alberto Garzón

The vice-secretary of Communication of the Popular Party has shown his surprise on Telecinco for the continuity of some of the ministers, after the revolution that Pedro Sánchez made this Saturday in his Executive: “I am surprised who is still in the Council of Ministers. If we ask, I don’t think there is a single Spanish qthat you understand that Mr. Garzón continues “Montesinos said.

Reactions: Jaime de Olano: “Sánchez has made a motion of censure himself”

The National Deputy Secretary for Participation of the PP, has assured on TVE that: “Seeing the changes that have occurred, our impression is that Mr. Sánchez has made a motion of censure to himself“. The deputy secretary continued:” We conclude that it is one more propaganda exercise. The Government is in crisis, yes, but the one who is in crisis for the most part is Mr. Sánchez and that is why all these changes in the Council of Ministers. “” I have the feeling that policies are not going to change anything at all, “he said. Olano.

Tomorrow, first meeting of the new Council of Ministers

With the end of this act, the new Government is composed. Tomorrow will be the first meeting of the Council of Ministers in which the new members will already participate.

With the new changes, there is a female predominance in the Government: female ministers account for 63% of the composition of the Executive; being the one with the largest share of women in Europe. 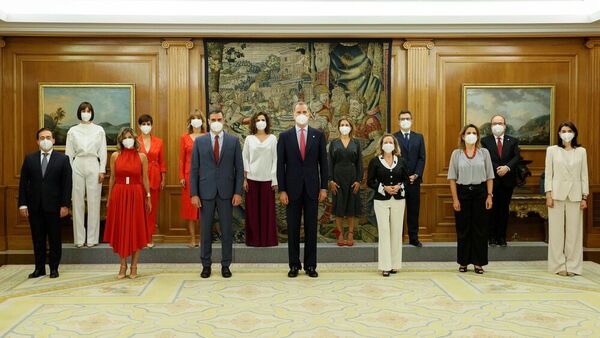 Diana Morant promises the post of Minister of Science and Innovation, replacing Pedro Duque. The Executive is also referred to as the “Council of Ministers”. 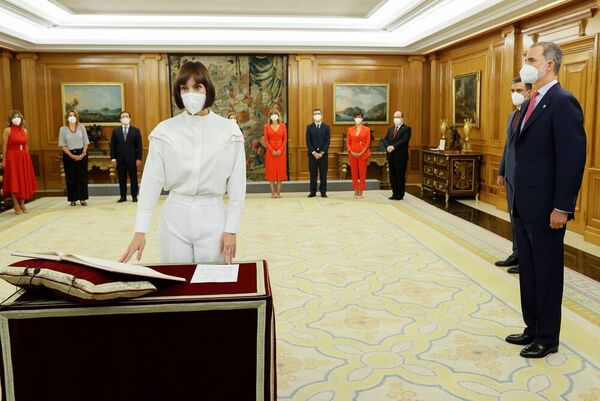 Miquel Iceta promises his position as Minister of Culture and Sports, thus leaving the portfolio of Territorial Policy and Public Function. 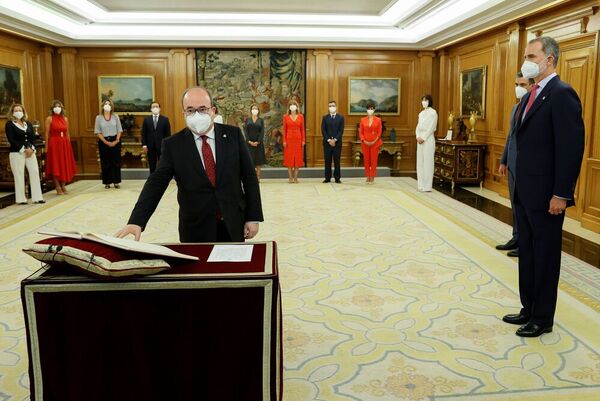 Isabel Rodríguez promises her position as Minister of Territorial Policy. The one who until Sunday was mayor of Puertollano, replaces Miquel Iceta 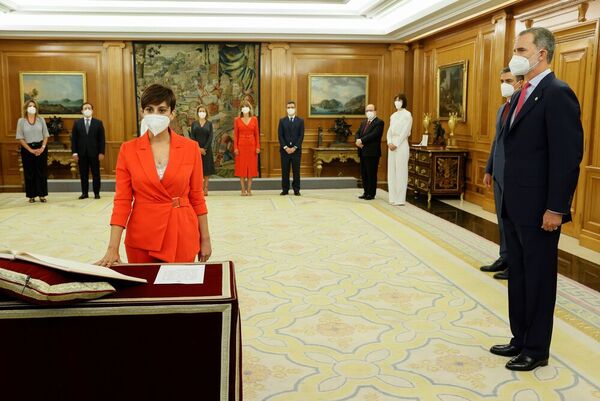 Felix Bolaños promises his position as Minister of the Presidency. He, like Albares, in the part of the formula in which he promises to keep secret about the Council of Ministers; he has not used the feminine. 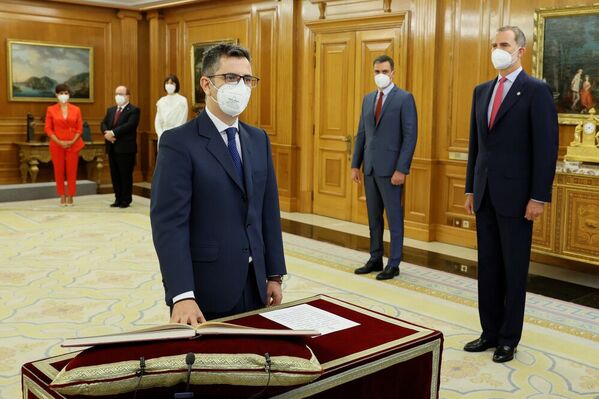 Alegría assumes the position of Minister of Education

Pilar Alegría promises the position of Minister of Education and Vocational Training. It also assumes the commitment of keep secret the deliberations of the «Council of Ministers and Ministers». Replaces Isabel Celáa. 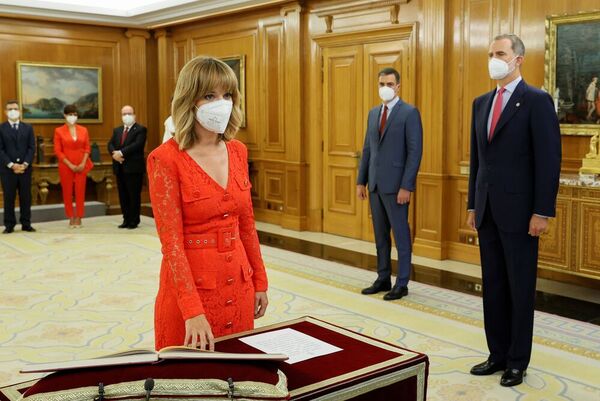 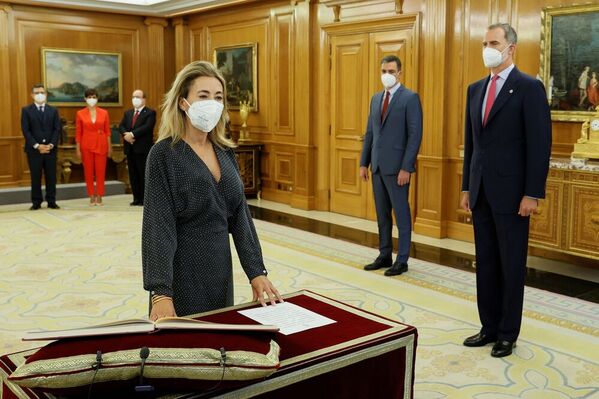 Mará Jesús Montero promises her position as Minister of Finance and adds the competence of the Public Function, previously adhered to the Territorial Policy. However, she is no longer the government spokesperson. 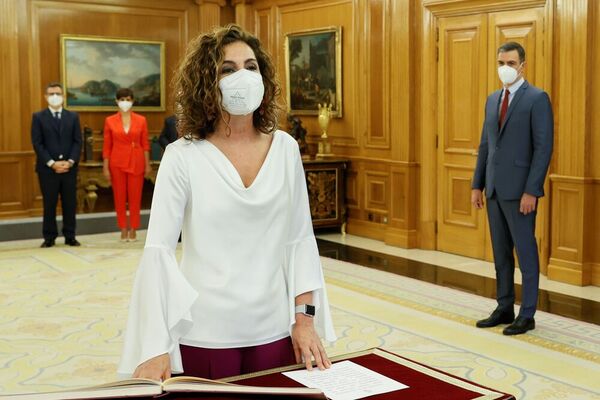 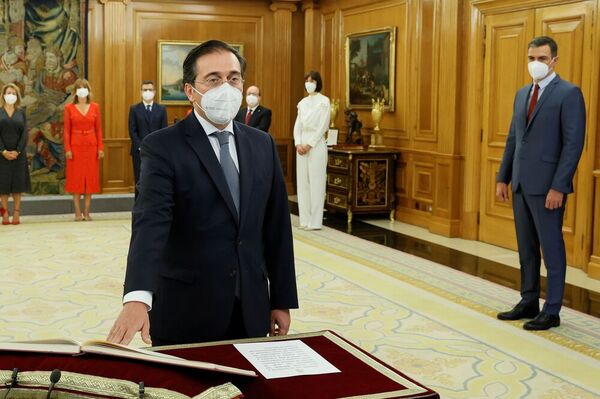 The new head of Spanish diplomacy

The King and the president of the Executive, Pedro Sánchez, observe the third vice president and Minister for the Ecological Transition and Demographic Challenge, Teresa Ribera, during the inauguration ceremony of the new appointments that takes place this Monday at the Palacio de La Zarzuela 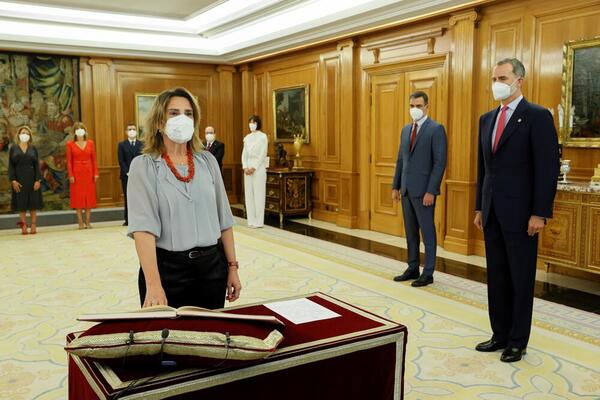 The Minister of Labor becomes the new second vice president after the promotion of Calviño. He has promised his position and has referred to the Executive as “Council of Ministers”

King Felipe VI and the President of the Executive, Pedro Sánchez, observe the First Vice President and Minister of Economic Affairs and Digital Transformation, Nadia Calvin, during the act of taking possession of the new appointments that takes place this Monday at the Palacio de La Zarzuela. 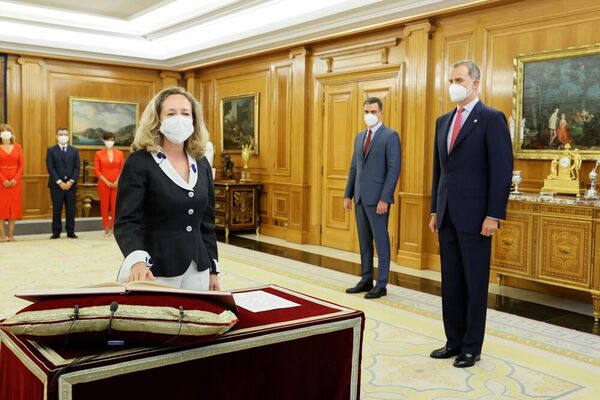 Pilar Llop, former president of the Senate, promises her position as Minister of Justice. The protocol marks that she is the first to do so, since as a Notary Major of the Kingdom she must accredit the oaths or promises of the rest of the new ministers. 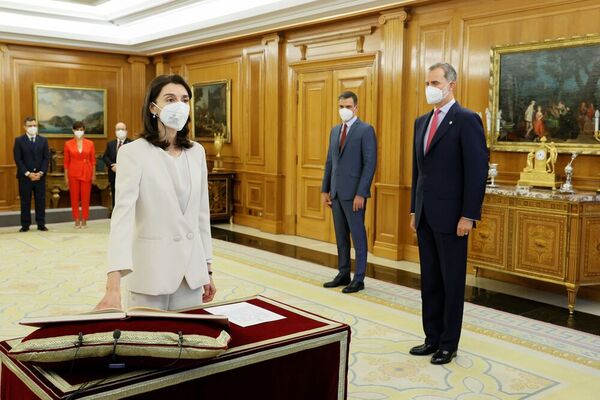 Of the government Carmen Calvo leavesUntil now, first vice president and in charge of the Presidency and Relations with the Courts. It has also been ceased Jose Luis Ábalos, who held the Transport portfolio, at the same time that he was the secretary of Organization of the socialist party. Three months before the Federal Congress – October 15 and 17 – the PSOE expects a profound change in all its organs. The other big surprise of the weekend was the cessation of Ivan Redondo as head of the president’s cabinet. The one who was once the plenipotentiary guru of Sánchez – creator of the motion of censure that displaced Mariano Rajoy in 2018 – will be replaced by Óscar López, a friend of the president. Old acquaintances, their paths separated when López supported former president Patxi López in the primaries against Sánchez. After passing through Paradores, Sánchez now recovers it to lead his cabinet.

After a hectic Saturday, in which Pedro Sánchez dismissed seven ministers from his quota of the coalition —The United We can all follow—, today the new members will take their portfolios. They will be Félix Bolaños (Minister of the Presidency), Pilar Llop (Justice), Diana Morant (Science and Innovation), Pilar Alegría (Education and Professional Training), Raquel Sánchez (Transport, Mobility and Urban Agenda), José Manuel Albares (Foreign Affairs) and Isabel Rodríguez (Territorial Policy). In addition, Miquel Iceta will take possession of the Ministry of Culture and Sports.