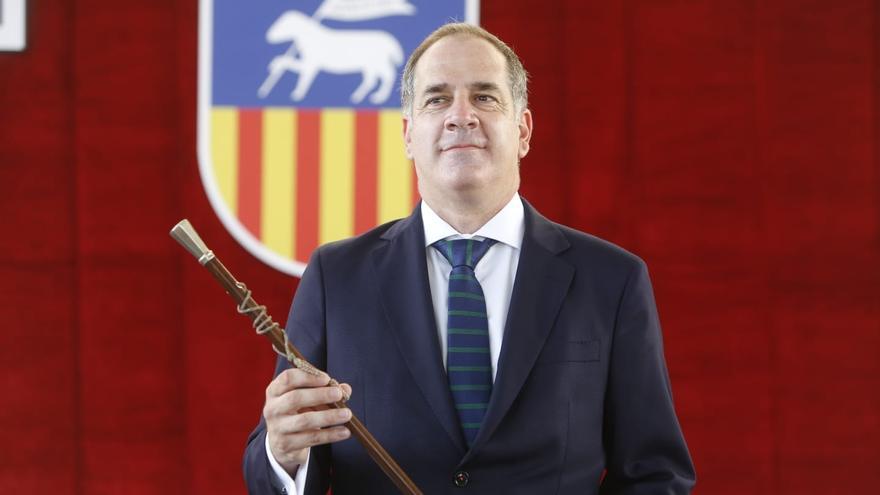 After the voting and the proclamation as mayor, Jaime Albero He has given him the staff of command. Roman has promised his position. And applause has been fused with the melody of the Colla of the musical group La Paz. The outgoing mayor has given advice to his successor that: “do not miss the opportunity to defend the interests of Sant Joan” at the same time he has warned that the bipartisan is a stability pact ensuring that “PSOE and Cs we are going to do our best to continue to measure up. ”

The president of the Diputación congratulates Mazón.

The brand new mayor has begun his words of gratitude by naming the positions that accompanied him, highlighting the President of the Provincial Council, Carlos Mazón, mayors of the region such as that of Alicante, which is at the same time the president of the Association of Municipalities of l’Alacantí, Luis Barcala, from San Vicente, Jesús Villar, from El Campello, Juanjo Berenguer and the mayor of La Torre de les Maçanes, Cristóbal Sala, among others. The Popular Deputy Jose Antonio Rovira; the socialist deputy Toñi Serna; the spokesperson for Compromís in Alicante Nacho bellido; a large representation of councilors and deputies of Cs as Rosa Menor, Fernando Llopis, María Quiles, Emigdio Tormo, the regional organization secretary, Teresa Ortiz; the vice mayor of Alicante, Mari carmen sanchez, the Alicante Town Planning Councilor, Adrian Santos. Spokesmen and councilors of different municipalities. As well as former mayors of Sant Joan, and members of associations of Sant Joan such as the president of the merchants, Manuel Nieto.

Perhaps the presence that has surprised the most and has given rise to numerous comments due to the political reading that translates into their attendance has been that of the senator and former secretary of Organization de Cs expelled from training Emilio Argüeso, accused of boycotting his own party; and to whom Román has invited to this special event, despite the blisters that his presence raises among the members of Cs.

In his speech, Román stressed that he will work for everyone, that he will be an office and street mayor and that he will listen to all the neighbors. He thanked the presence at the event and also remembered those who have not been able to be in it, such as the late socialist mayor Edmundo Seva, Justice of the Peace Guillermo Ivorra, or the chronicler Isidro Buades, Yayo Rafael (who in December would have fulfilled his centennial), Mari Carmen Garrido and her own mother.

The PP has reached out to work together. While Podemos, Vox and Compromís have been very critical of the bipartite government and the management developed, stressing that the 2021 budgets have not yet been approved, a task that depends directly on the new mayor.

The act has been very numerous, within the possibilities by covid regulations, with about 200 people who have gathered in the roofed patio of the Cristo de la Paz College to attend the historic event.