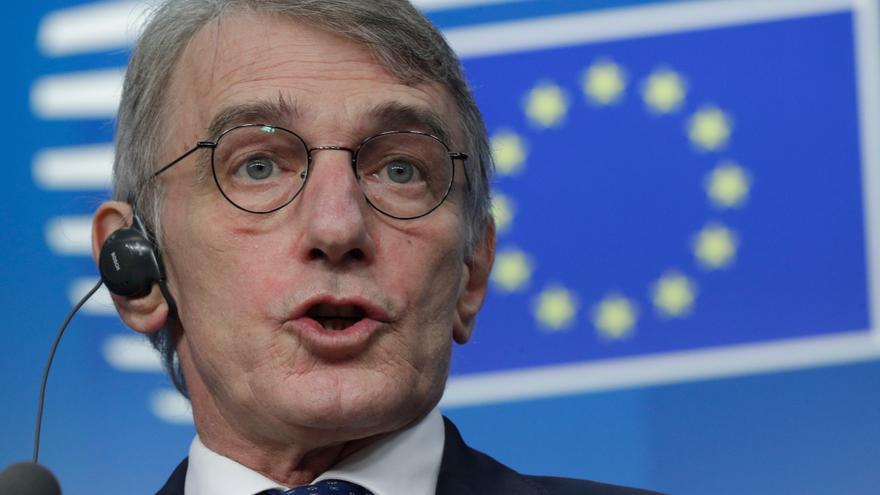 The President of the European Parliament, David Sassoli, who died this Tuesday at the age of 65, assumed in his last years of life the work of direct the European Parliament in the midst of a global pandemic, an exceptional period in which he had to manage the transfer of all the political activity of the institution to a remote modality and in which he reaffirmed his desire for a more united and social Europe.

Arrived at the presidency of the European Parliament unexpectedly, the Italian led the institution in a stage in which historical legislation was negotiated, such as the post-pandemic recovery fund, and others very present in the lives of Europeans, such as the digital certificate of vaccination of the coronavirus that helped restart tourism in the summer of 2021. Although his presidency was marked by the coronavirus, Sassoli always maintained a speech of an outstanding social tone, with constant calls for a more supportive immigration policy and to seek solutions to the inequalities exacerbated by the pandemic, as well as to youth unemployment.

It is the first time in the history of the European Parliament that an incumbent president has died.

From newscaster to the European Parliament

Born in Florence in 1956 and graduated in Political Science, Sassoli had a long journalistic career before joining the Italian Democratic Party: he worked in small media and news agencies and was a direct witness of key moments in European history, such as the fall of the Berlin Wall, which he himself struck that night of November 9, 1989 with a hammer and a chisel as shared in a photograph on his website. At the beginning of the 90s it was premiered on the Italian public radio television, where it would end up being one of the most recognized special envoys and presenters in the country, including the chain’s informative flagship.

Representative of the progressive Catholic wing of the Italian Democratic Party, he joined this party since its founding in 2007 and accepted the challenge of leading its list to the European Parliament in the 2009 elections, where he won a seat in the community chamber and established himself as leader. from the ranks of his in-laws in Brussels. After a brief attempt at municipal politics in 2013, Sassoli renewed his community seat in 2014 and became one of 14 vice-presidents of Parliament.

President of the European Parliament by surprise

After the stormy election of the leadership of the European institutions in the summer of 2019, which selected the new presidents of the Commission and the Council, but not that of the Parliament (competence of the MEPs), the Social Democrats were expected to nominate the Bulgarian Sergei Stanishev, who since 2011 was the president of the party at the European level. However, the name of Sassoli emerged at the last moment at the proposal of the Spanish Iratxe García and, with the approval of the other large groups in Parliament, became president of the European Parliament in early July 2019.

In his first speech, he outlined some of the themes that were constant in his public speeches during his two and a half years of presidency, such as youth unemployment, the need for a solidarity and common migration policy in the EU or the social protection of citizens . The Italian was also immersed in the Catalan political debate after being in charge of announcing, as president, that ERC leader Oriol Junqueras was a full-fledged MEP following the ruling of the Court of Justice of the European Union in December 2019 The seat lasted for Junqueras less than a month due to the successive decisions of the Spanish Justice, but Sassoli’s decision to follow these sentences and withdraw the position was the subject of numerous judicial appeals and debate in the context of the Catalan crisis, whether Well, he always defended having complied “scrupulously” with what was established by justice.

But, barely three months later, however, he was overcome by what was the great challenge that marked his entire presidency: a global pandemic that forced him to close the doors of the European Parliament now. transfer all its legislative processes to the online scene. In an institution with more than 700 MEPs where images of corridors, meeting rooms and hemicycles bustling with activity are common, Sassoli was forced to make decisions on unpopular occasions, such as canceling monthly trips to the city for more than a year. headquarters of the European Parliament in Strasbourg (France) to hold the plenary sessions, but always maintained the principle that the legislative processes should continue without interruptions. In the harshest months of the confinements in Europe, he also made the decision to offer menus prepared by the kitchens of the European Parliament for people in need and healthcare workers, as well as making part of its fleet of vehicles or the offices of the European Parliament in Brussels and Strasbourg available to accommodate patients or women in risk situations, among other vulnerable profiles.

The last months of his mandate were conditioned by the pneumonia that he contracted in September 2021, after which he was convalescent for two months. A “disruption” in his immune system that ended up complicating led to a new hospital admission on December 26, 2021, which however did not transpire until yesterday, a few hours before his death at 1.15 am this Tuesday in the Aviano Oncology Reference Center, in Italy.

Sassoli, passionate about Fiorentina and classical music, is survived by his wife, Alessandra Vittorini -superintendent of Archeology of the city of L’Aquila and very involved in the reconstruction of the city after the earthquake of 2009- and their two children , Giulio and Livia.