Well, in the V edition of Conversations for Leadership on Women, Science and Health held on July 6 in Madrid, they met Maria Neira, (Director of Public Health and Environment of the WHO); Rosa Menendez (president of the CSIC) and Patricia Fernández De Lis, journalist and science communicator to discuss some perspectives such as the female gap in the professional world, how the pandemic has been managed, the unequal distribution of vaccines in the world or how important it is to fight for reliable information and thus avoid the social degeneration caused by fake news.

There have been many reflections that the talk with these three exceptional women left us, moderated by Francisco J. Marco, General Director of Business Support at MAPFRE, the insurer that has turned to alleviate the effects of the pandemic, dedicating more than 45 million euros in aid for millions of people around the world, as well as the company’s full commitment to promoting talent. Let’s see:

When asked if their careers have been easy or difficult, each of the speakers gave their vision.

María Neira comments that “you have to know how to extract the best of the bifurcations that the road brings in life.” He confessed that his career is the result of “circumstances, because you make decisions. Nothing replaces an open mind to alternatives. You are accepting certain challenges that you had not thought of. In the United Nations you are more privileged, because much importance is given to closing gaps. In Africa, Asia and Latin America I have seen tremendous difficulties, I have worked very masculine worlds where girls did not have the possibilities that I have had. When I talk to women, I tell them: Don’t accept anyone telling you how far you can go. You can do everything. In the leadership part, you have to take many steps. ” 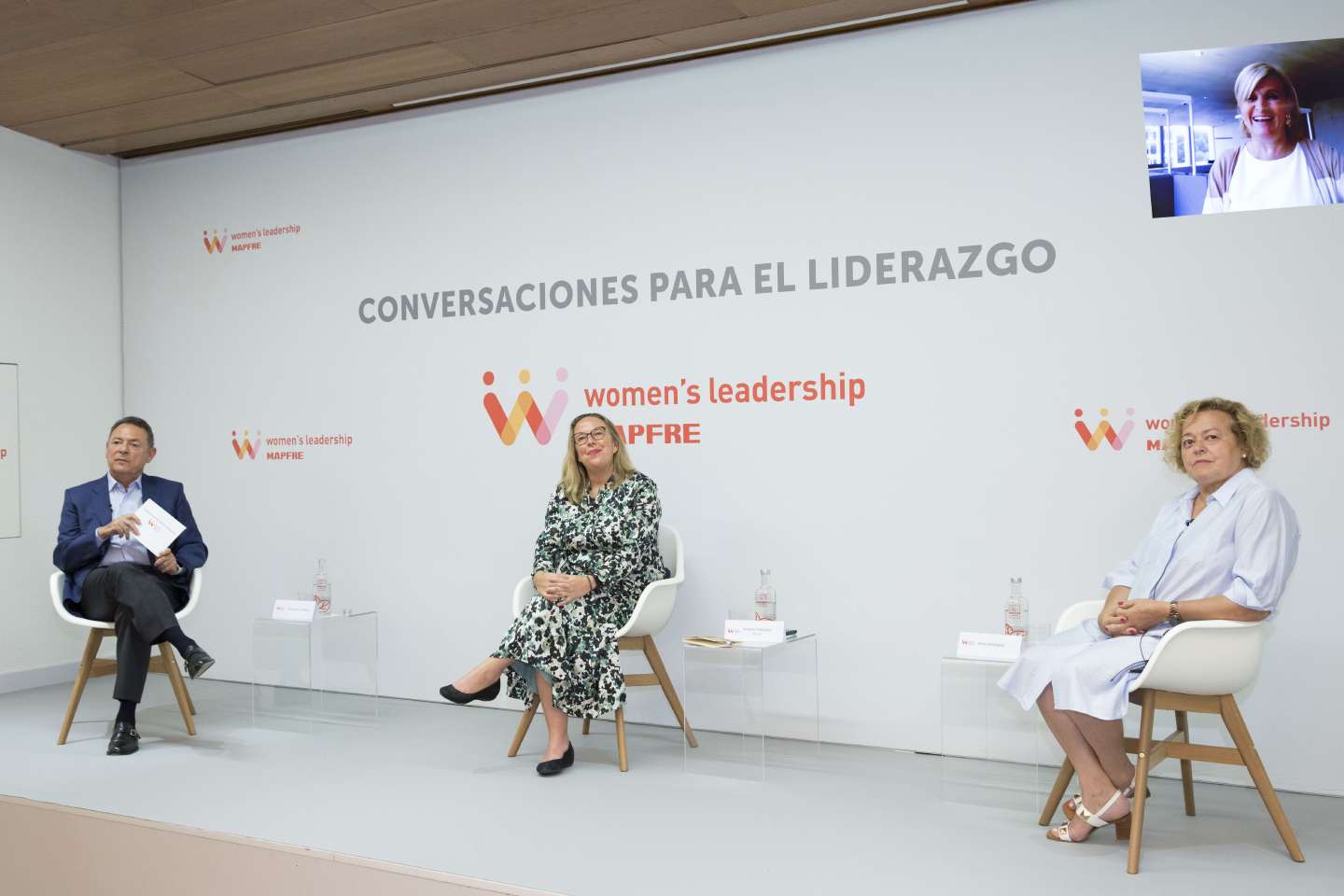 From left to right: Francisco Marco, Director and Director of Business Support at MAPFRE, Patricia Fernández de Lis, journalist and scientific disseminator, founder of Materia, Rosa Menéndez, President of the Higher Council for Scientific Research (CSIC) and María Neira, Director of Public Health and Environment of the World Health Organization.

The case of Rosa Menéndez has certain similarities. For her there are actions that have not been raised. Rosa says: “I have worked a lot, with an open mind. I was one of the first doctors to go to England. It was a cure for humility: in Spain we were no less intelligent, it helped me to appreciate what I had had. It gave me tremendous security. I did not notice any type of discrimination because of being a woman, but I have to admit that I agreed to work in the Commission [presidió la Asociación Europea de Materiales de Carbono] thanks to the fees. He worked a week outside of Spain and if he said he had two children, they would think: you will be divorced. (…) Everything I have done I have enjoyed. Difficulties are forgotten. ”

Patricia F. De Lis, for her part, assures that “journalism is highly feminized. I have not encountered many problems. But from the beginning my orientation was towards technological, economic and scientific journalism. (…) I have been thinking about it: I have come across a problem because I am a woman. But I see a change. Every time I talk to more women, I interview more women. Sometimes we have experiences where we miss ourselves, we stumble in our own careers. Sometimes we impose the barriers on ourselves. ”

It has been one of the most prominent points of this event. Because of what it has meant for society, because of its economic relevance and because of its proximity in time. Patricia F. De Lis, assures that this year has been the worst of her life. “We had to make an online newspaper, remotely, with complex, changing, terrifying information… But the newspapers do not want uncertainty. We have had very few certainties, it has been an extraordinarily complex year. In science we work with papers, at first we received studies in their purest form and it was difficult to convey them to the readers. The CSIC and the WHO have helped us a lot. ” For Rosa Menéndez it has not been easy either: “We had challenges such as coordinating 120 centers, teleworking, the utmost rigor in security matters. The effort was made with the coronavirus. We react in a week. We contacted virologists such as Luis Enjuanes and Mariano Esteban, so that they could put their experience within a global health platform, coordinated by Margarita Del Val, as quickly as possible. We had products on the market, we analyzed the presence of the virus in the air, in the water, genomic sequencing … This level of effort cannot be maintained because humanly you do not resist. ” María Neira shares with her colleagues that personal feeling of responsibility, her eyes red from fatigue and the feeling of helplessness. “You cannot imagine how it was in the WHO, converted into an operations center, but which has a very strong team at the head of Emergencies. I had three obsessions: proportion, balance, and context. At WHO we have great convening power, we can work with the best. I am grateful for the intellectual and human generosity of the CSIC and of the national centers in the world. How many scientists have we called at 3:00 in the morning, 9:00 in Geneva? At no time did they make excuses. Now we have to turn our attention to the human factor. ”

Rosa Menéndez assures that they are making the pertinent steps from the CSIC with the WHO to stop some of our vaccines [1 pasa a fase clínica este mes y existen otros 4 proyectos]. “We always think of Africa and Latin America, which due to historical proximity and in this situation we cannot leave it like this.” And María Neira assures that the longer we take, the more we lack the necessary technology. The scientific community is partnering. “We cannot draw lessons as if the next pandemic is going to be like this. It is necessary to have a wide platform, to anticipate any type of viral situation, that the scientist leaves the role that is self-assigned ”.

“In this pandemic we have seen the best and the worst of the human being. That detachment, that work and this tranquility who are vaccinated. We have seen wonderful things. I am surprised that there are vaccines for us in rich countries and peace of mind has not been resolved in other countries such as Latin America or Africa. There was a moment of great confusion in which political and economic leaders contributed to the dissemination of fake news. (…) Close collaboration between journalists, science and health managers is essential. The only way to fight fake news is to collaborate, not isolate ourselves again. This is how blunt the journalist Patricia F. De Lis is, who has experienced the information / misinformation about the pandemic firsthand. To which Rosa Menéndez adds: “How to fight against false news, which can have counterproductive effects? With good professionals. What is not rigorous must be denied. ”

Also Read  Joanllu Pons and Jèssica Vall: "In Tokyo we will look for our best brands"

The conclusions about the forum have been well objectified by the protagonists of the event.

On the situation of Spanish science in the international sphere, Rosa Menéndez stressed that “Spain is known, recognized and well positioned”. María Neira: “We have to believe it a little more as Spaniards. Sometimes the French tease me, with their Caprice des Dieux cheese (caprice of the gods and it sounds so different) from Asturian Afuega’l Pitu cheese (translated into Spanish, “to drown the chicken”). ”

They also addressed the need for companies to invest more in science, and the promotion of public-private collaboration, to which Rosa Menéndez alludes: “Many results are lost, a lot of seed. If someone were willing to invest to move from the prototype phase, we would have it better. That’s why everything you hear from MAPFRE [donó 5 millones de euros al CSIC al inicio de la pandemia]…. Science is the industry of the future. (…) The CSIC is the body that has obtained the most patents last year (more than 100), but we lack that push.

On how to better promote science, María Neira recommended “putting investors to talk to scientists every 3 months. Science is the market and it is the future. We are going to recover green and positive ”. Patricia F. De Lis also points out: “I hope we have learned our lesson. Science saves lives, provides us with a future. Years ago we did not know it existed and today most of us are vaccinated. I don’t know if we are aware of what we have been through, how privileged we are ”. And to conclude, Rosa Menéndez added the importance of education: “We must also bet on education. It is very important, like culture. A well-educated society has the ability to discern. This country needs more scientific culture. That’s where we women come in. ”

Are you interested in watching the debate between María Neira, Rosa Menéndez and Patricia Fernández De Lis on video?