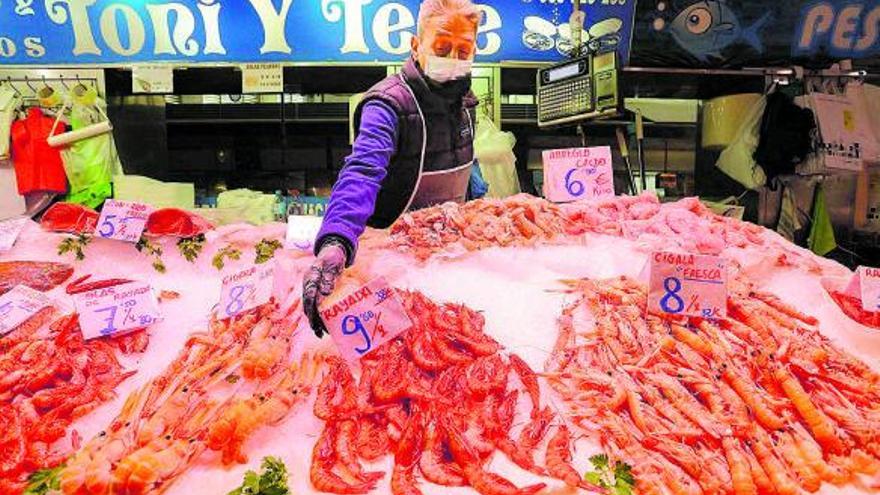 With inflation through the roof (5.5%), its highest level in the last three decades, the general increase in prices will mark Christmas meals this year. Can we buy shrimp and lamb, two of the star products for the feasts of these Christmas dates? Well, everything seems to indicate that you will have to scratch your pocket. And enough.

The Cofradía de Pescadores de Xàbia explains that this year the demand for red shrimp from Dénia has skyrocketed during the last months of 2021. Some wholesale buyers -those most demanding- do not want to miss the opportunity to make their customers enjoy this snack from the Mediterranean, whose price at the auction will far exceed that of the previous season, since the kilogram of this shellfish (the highest caliber) is auctioned for 200 euros; that is, 30% more than in 2020. And it continues to rise.

The president of the association of brotherhoods of the Marina Alta, Moisés Erades, acknowledges in statements to this newspaper that this year “there is more normality than the previous one due to the recovery of the sales channel in hotels, cafes and restaurants (horeca). And the purchases have been advanced to November “, according to this fisherman from Xàbia. This small brotherhood, which only groups six boats, is “optimistic” when making forecasts until the end of the Christmas season. If there is something that differentiates the red prawn from Dénia, it is its mild flavor. They grow quite deep, where the sun’s rays barely reach. This shellfish can only feed on a very specific type of algae that grows in these depths.

Although not all are prawns from Dénia, there are also prawns from other fishing places, including from other foreign territories, the Central Market of València is a good thermometer to know the buying habits of consumers. “There is more desire than ever to celebrate Christmas and that is why sales rebound compared to the previous year,” explain vendors from the iconic site of the capital of Túria. The upturn in demand pulls foreign shrimp imports and they often travel by plane. And it is that they are one of the main products imported by wholesalers in Asia, the main fishing and shellfish power in the world. Prawns and other seafood also arrive from Morocco and Mauritania (prawns and lobsters, especially). This week the retail prices of the striped prawn offered in the Central Market of Valencia were around 40 euros per kilogram. Everything seems to indicate that it will rise in the next few days.

In general, food prices are increasing by 8% compared to last year, according to the report presented this week by the Organization of Consumers and Users (OCU).

Elvers, clams, oysters, suckling lamb and sea bream are the products that rise the most; none of them had ever been so expensive. Meanwhile, hake, poularde and round veal are the ones that decrease the most. Others, such as prawns, Iberian ham or red cabbage have barely changed their prices compared to last year at this time.

“Some consumers have advanced purchases for these holidays and others choose to leave it until the last minute, although most of them admit that they will make changes to their usual menu,” they assure from the Central Market of València. There, whole legs of suckling lamb were quoted this week at 13.9 euros per kilogram, a value that will increase over the next few days and is higher than last year.

Cooking a lamb or choosing it from a restaurant menu this Christmas will cost us much more because, according to the Union of Small Farmers (UPA), the demand for this meat in Muslim countries, whose sector is also fully committed to exports, the current price of lamb has increased by almost 50% compared to 2020 in the national market.

The greater expense changes the trend in the menus of some families compared to other times. Of the 15 products that OCU tracks, nine have increased in price, especially elvers (53%,) followed by clams (36%), oysters (28%), suckling lamb (22%) and sea ​​bream (15%). None of them have ever been so expensive. On the contrary, among those that fell the most, the aforementioned fish and shellfish such as barnacles (-27%), hake (-16%), poularde (-6%) and round veal (-5%) stand out.

Elvers, clams, oysters, suckling lamb and sea bream are the products that increase the most, to the point that none of them has ever been so expensive.

As confirmed by a report by the supermarket chain Aldi, Valencians are clear about their preferences for Christmas: prawns, prawns and crayfish will be the main protagonists of these festivals, with 27%, followed by ham (23%), cheeses (19%) and lamb or kid (14%). This quantitative study, carried out on a sample of 1,500 consumers, also shows how the Valencian Community stands out above the rest in nougat consumption (18%), which is five percentage points above the Spanish average. By age, fish and shellfish remain the most consumed by all groups, except among young people between 18 and 34 years old, who will opt for meat. For their part, wine and nougat will stand out among the group over 65 as the most consumed products.