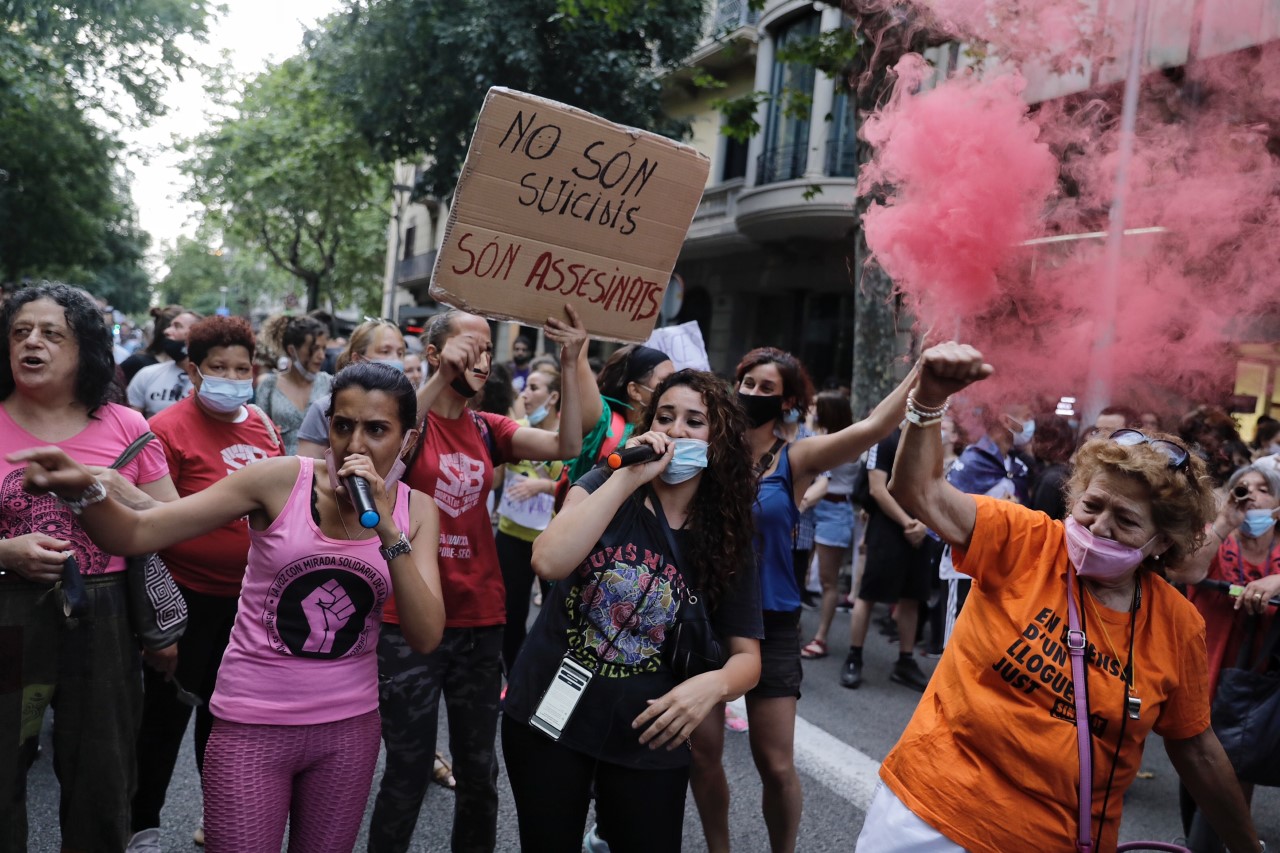 Segundo F., 58, could not bear his eviction. He could not resist being thrown out of the apartment where he had lived since 2018, in the Barcelona neighborhood of Sants. The man, from Ecuador, had been out of work for three years. With the help of Caritas, he had tried to return to the job market, at a difficult age. Only between February and November of last year, with the harsh effects of a global pandemic, sent the resume to eight jobs. In all eight cases it was rejected, Caritas recalls. On Monday, a year after not paying for the apartment where he lived with his dog, he decided to jump out the window when the judicial procession showed up at his house to kick him out.

One of the two officials rang the bell. Segundo was slow to respond. In the end he opened the door. “Please put on the mask,” said the civil servant of the SAC Civil, the service that delivers all notifications from the courts in Barcelona. It was his last day as a pitching attendant. Segundo didn’t say anything to him. He walked into a room on the floor and threw himself out the window at the incredulous gaze of the official. There was no time for anything else.

The man’s public defender had made one last effort to secure a postponement. He asked for the “extraordinary suspension” of the eviction due to a situation of vulnerability, as provided for in the government decree for the economic consequences of the pandemic. The judge rejected it. The requirement of automatic suspension: that the owner be a large fork (10 or more floors) was not met. In the case of Segundo F., the owner is a retired woman who had rented the Sants apartment for just over 800 euros as a “supplement to her pension,” according to sources close to the family. The woman, the same sources explain, went seven months without collecting rent before deciding to file a lawsuit. The total debt amounted to 8,000 euros.

Magistrate Nieves Osuna also alleged that the documentation provided by the man “does not prove the substantial loss of income” due to the loss of employment, another assumption to suspend a launch. And he emphasizes that no payroll has been provided from his previous job as a warehouse worker at Mercadona. The previous days, the lawyer was chasing the man to get him documentation. He managed to gather the unemployment benefit papers and filed the petition Thursday night. On Friday, the judge informed him of her refusal. On Saturday morning, the lawyer called the man to inform him. Segundo did not pick up the phone. In the afternoon, he wrote him a WhatsApp message explaining that on Monday, unless the judicial process agreed to suspend him at that very moment, he should leave home. I do not answer.

On Monday morning, the Barcelona City Council, through the anti-eviction services that assisted Segundo, contacted the plaintiff’s lawyer in case an extension could be obtained. The owner went to Bacardi Street. But his lawyer was so convinced that the eviction would end up being suspended in situ They didn’t even bother to call the locksmith. The eviction was not suspended, but it was not carried out either: the tenant took his own life earlier.

Segundo F.’s judicial journey had followed a normal path. The process was momentarily paralyzed when he requested free justice. A public defender was assigned to him, and he was also offered a procedure that is usually done in cases of vulnerability, in which the court requests permission to send personal data of the affected person to social services. He never filled out those documents. And it was not until later when, with the help of the Cáritas labor service, he went to the social services of the Barcelona City Council.

In April, the City Council drew up a vulnerability report, stating that the man lived alone, was unemployed, and could not afford the rent. His lawyer presented that document to the judge. The City Council on Tuesday reproached the court for not having a proactive attitude and for contacting them or the man’s lawyer if any formalities were missing. A more guaranteeing position instead of going through with the process. “It is a death that should not have occurred,” criticized Mayor Ada Colau through her Telegram channel. And he demanded that the courts review “the criteria with which they decide to apply or not the current moratorium.”

Specialists remember that suicide does not usually have a single trigger, but is the result of psychological, biological and social factors that have treatment. In the case of Segundo F., no one detected the intentions that haunted his head in the face of the financial problems that plagued him, or if he suffered from any other type of concern. He also did not communicate his situation to the neighborhood networks, very active in Barcelona, ​​such as the Housing union or the Tenant union. An example of this is that there was not a single tweet calling on people to avoid their eviction, and that the news was not known until this newspaper published it. People with suicidal behavior can call the Hope Telephone (717 003 717) or the Telephone Against Suicide (911 385 385), dedicated to the prevention of this problem. Barcelona also has a toll-free telephone number (900 925 555).

Mabel also lives on Bacardi Street, in the Sants neighborhood, where on Monday Segundo F. committed suicide after the judicial procession rang the doorbell of his house to comply with the eviction order. He lives right across the street, also on the third floor, across the street. When she raised the blinds, the first thing she saw was the balcony and the window, now with the curtains drawn, of her neighbor, whom she did not know. “I remember I told my husband that he had to live alone, because I always saw him cleaning the windows,” explains Mabel, pointing to the window cleaner and the broom, which are still hanging and can be seen from the street. On the balcony, Mabel remembers, she had some cages with birds. For some time, about a year, he had lived alone, with the only company of birds and a dog.
He did not have much contact with the rest of the inhabitants of the building, they saw him especially when he took the dog for a walk. “I imagine they have taken it to an animal shelter. I hope, well,” says this neighbor about the pet. “It’s very difficult, life is very difficult,” he thinks aloud.
On the balcony you can no longer see a cage with birds, but the corner bar does have one, with a bright yellow canary. “I don’t know him, I don’t know anything about him,” the waitress responds quickly. It is seen from the league that she is tired of answering this question to the journalists who besiege the entrance to the building. / TOMEU MASCARÓ